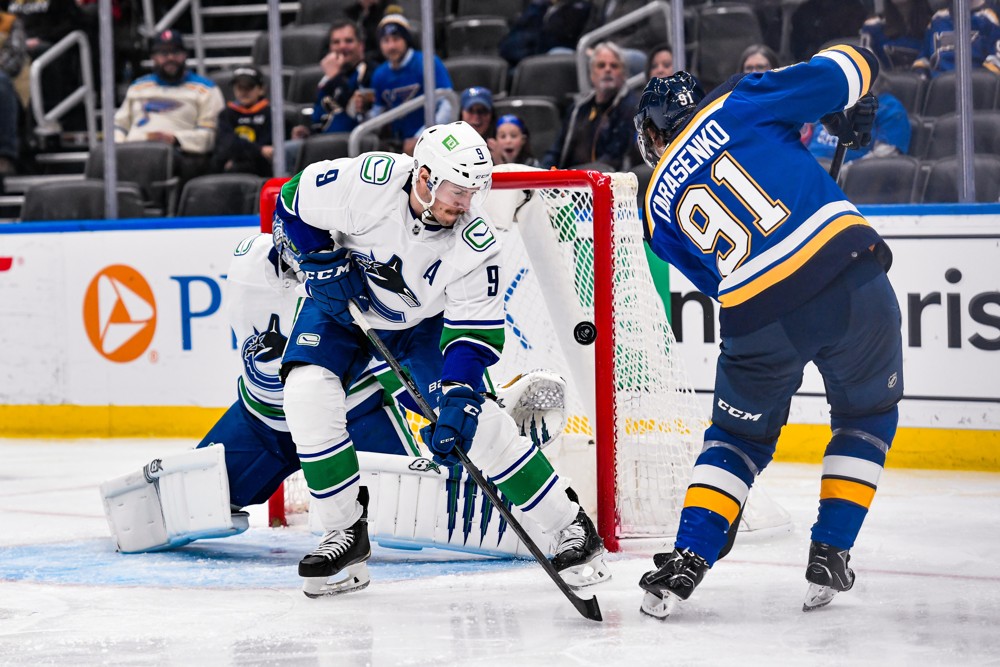 For a couple of years, Vladimir Tarasenko seemingly couldn’t catch a break. Injuries derailed his production and pushed him to the background of a forward corps that now centered around two-way pivot Ryan O’Reilly. He was neither happy with his contributions nor his deployment, and his relationship with St. Louis’ management soured to the point where he requested a trade.

Fast-forward 80 games or so, and Tarasenko is still a Blue. With 82 points in 74 contests, he’s also enjoying the best year of his career. The 30-year-old has rediscovered his scoring touch and is pacing a Blues attack that runs as deep as any in the league (4th in goals per game).

The most important ingredient in Tarasenko’s bounce-back campaign has been a clean bill of health. Shoulder issues had plagued him lately, but they finally appear to be in the rear-view mirror. That’s a vital development for a player of his mold. Though he isn’t a traditional power forward, there is a heaviness to his game that had been lacking over the past two campaigns. He’s no longer shying away from the rough stuff. In fact, he hasn’t absorbed this many hits since 2016-17. Night after night, he’s absorbing or initiating contact in order to make plays:

Tarasenko carries the reputation of a marksman, but the telltale sign that he’s found his rhythm has little to do with his shooting. He’s in the groove when he’s engaged in the action physically. When he dips his shoulder and drives wide or stops up and holds defenders on his back, he’s an absolute unit. He’s fast, he’s skilled and he brings a 6’1”, 228-pound frame to the party. His nickname is Tank for a reason: Bodies just bounce off him.

His renewed faith in his abilities is apparent every time he takes the ice. He’s more patient in possession. He’s looking to lug the puck into the middle of the ice. He’s battling for loose change in the trenches. He’s actively trying to create rather than merely finish plays.

That’s the Tarasenko we remember. He’s challenging opponents in one-on-one situations, dancing through or bowling over them as he screams toward the net. He doesn’t believe defenders can stop him. Obviously, he can’t pull this off on every touch, but the simple threat of it keeps defenders honest and presents the Blues with a wealth of attacking options.

The Russian winger couldn’t have timed his return to form any better either. St. Louis had quietly been undergoing a transformation from a grind-it-out to a freewheeling group, and a healthy Tarasenko has lit the fuse for the Blues’ offense this season. His trio alongside ascending star Robert Thomas (77 points in 71 games) and crafty two-way veteran Pavel Buchnevich (76 points in 72 games) has exploded to become the team’s primary source of even-strength offense. At 5-on-5, they generate a phenomenal 5.51 goals per 60 minutes.

For a bit of perspective, that scoring rate falls right between those of the Gaudreau-Lindholm-Tkachuk (4.54 GF60) and Bunting-Matthews-Marner (5.95 GF60) lines. Yeah, that’s pretty good.

Thomas has emerged as one of the most effective high-danger playmakers in the sport. Buchnevich is a savvy and creative winger who controls the tempo in all three zones. Meanwhile, Tarasenko has made a name for himself as a high-caliber sniper. The Blues couldn’t dream of a better mix:

Regaining his upper-body strength has been a blessing for his shooting. He’s back to his catch-and-release best, effortlessly picking corners from distance. He does a great job of switching up his targets and the timing on his release. Though he’s not really known as a one-timer threat, his confidence is pushing him toward the lower slot and allowing him to bear down in tight as well. Defenses don’t always afford you much time, so a quick trigger is a nice complement to his more deliberate marksmanship.

Thanks to his linemates and drive, he’s setting his highest individual high-danger chance and expected goal rates in three years. But for the first time since 2018-19, he’s actually exceeding those expectations (8.8 goals above expected). That’s the mark of a top-tier finisher.

He doesn’t insist on shooting at every turn, though. He recognizes that defenders keep a close watch on him and that his linemates are entirely capable scorers too, which has offered his underrated passing some shine:

He’s no McDavid, Huberdeau or even Thomas, but he’s aware of the attention he receives and knows how to capitalize on the opposition’s commitment to smothering him. He has the build to buy time for himself and the vision to connect on royal-road setups. The chemistry he has with Thomas and Buchnevich is a thing of beauty. On the power play, he’s also adept at feeding the bumper or the backdoor if defenders are honing in on his shot.

He’s earned his respect back from opponents. He’s never had better linemates either. As a result, Tarasenko has shattered his career high in assists with 48. Overall, he ranks third leaguewide in goals and fifth in points at 5-on-5. That’s superstar stuff from a player many were ready to write off.

Not even a year after wanting out, Tarasenko has found a perfect fit with the Blues.