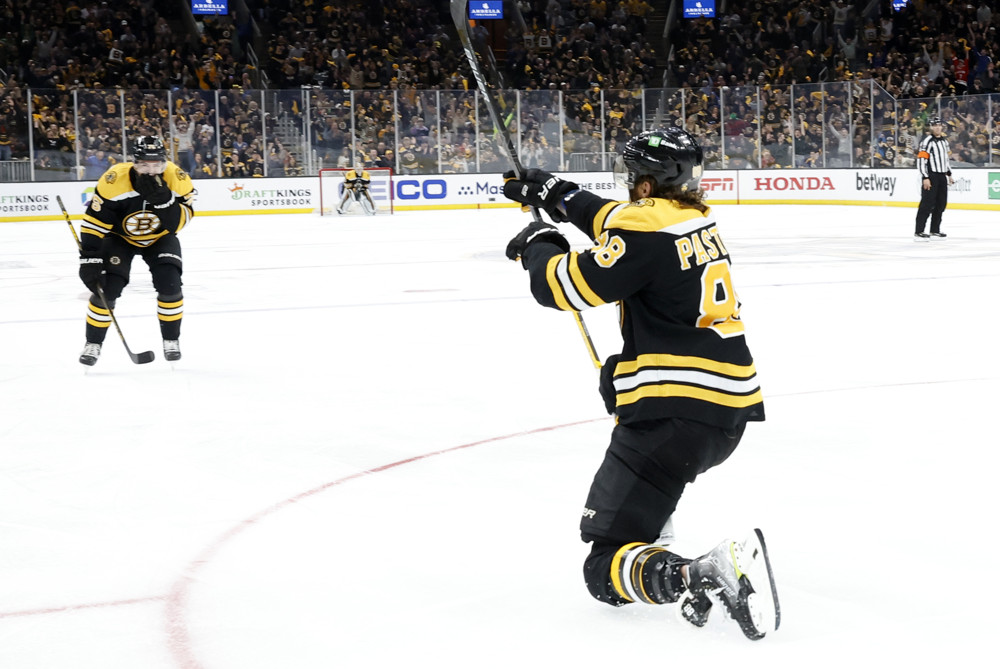 During the winter break, the Boston Bruins had plenty of time to mull over their disappointing 14-10-2 start. In order to turn the tide, head coach Bruce Cassidy resorted to a drastic measure: He split up the Perfection Line. Jake DeBrusk joined Patrice Bergeron and Brad Marchand, whereas David Pastrnak partnered up with Erik Haula and Taylor Hall.

Boston’s offense then exploded from 2.69 to 3.27 goals per game on the road to a 37-16-3 run to finish the regular season. Pastrnak was the biggest beneficiary. The star winger’s production spiked from eight goals and 21 points in 26 games (0.81 PPG) to 32 goals and 56 points in his final 46 games (1.22 PPG). Even though the Bruins only managed to clinch a wild-card berth, they were deeper up front as a result of this change and stouter on the back end after acquiring Hampus Lindholm at the trade deadline. Therefore, they were entering the postseason on a high note.

That momentum didn’t carry into their first-round series against the Carolina Hurricanes. Boston fell into a perilous 2-0 hole because it tallied just three goals in the two opening contests. This time, Cassidy returned to familiar territory: He reunited the Perfection Line. And once again, the rewards have been immediate. Boston has scored nine goals in the past two games to climb right back into the series and its best players are now brimming with confidence.

It took about one period to shake off the cobwebs, but the chemistry is back and palpable on every shift. Due to their spacing and synchronism, they’re enjoying more and higher-quality touches on the cycle:

Pastrnak oozes skill, Marchand brings vision and close-quarters shiftiness, and Bergeron provides spotless positioning. Put together, it’s poetry in motion. Everything arrives on time. The puck moves where it should, the defensemen pinch when it’s appropriate and the forwards swarm the offensive zone in search of that one window of opportunity. That’s translated to a lot of pressure. At 5-on-5, Bergeron, Marchand and Pastrnak are controlling 77.8% of the high-danger chances and 82.5% of the expected goals.

But if the Toronto Maple Leafs have taught us anything in the past few years, it’s that you need to convert expected goals into actual goals.

Thanks to their cutthroat mentality, that’s never been a problem for Bergeron, Marchand and Pastrnak. They combine their talent and uncanny rapport with a directness that opponents still can’t quite wrap their head around. Once there’s a chance to drive the action into the middle of the ice, they seize it:

Sure, Boston’s top line can wear you down with a prolonged cycle, but it’s most dangerous as a quick-strike, counterattacking unit. No dilly-dallying on the perimeter. Cough up the puck, and you’ll be fishing it out of your net within seconds.

The trio remained as potent as ever in its two home games so far. They factored into eight of the nine goals Boston scored across Games 3 and 4. At even strength, they’re currently averaging 12.22 goals per 60 minutes. While that absurd number won’t hold up, it speaks to how comprehensively this line steamrolled Carolina over the past two outings. There was just no stopping them. Pastrnak was relishing the possessions he couldn’t seem to get alongside Hall and Haula in the first two games, Marchand was licking his chops at the thought of playing with a seasoned sniper and Bergeron was now flanked with a pair of wingers who could capitalize on his unwavering three-zone puck support.

There’s a reason this group was long considered the best in hockey. Despite the Bruins conceding the opening goal in both Games 3 and 4, it didn’t matter in the end. When their first line is humming, they believe they can overcome anything—and they did in back-to-back contests.

As a bonus, their confidence at even strength has revitalized Boston’s power play too:

Though Pastrnak has always taken the ice with Bergeron and Marchand on the man advantage, their 5-on-5 success has seemingly made their execution tighter on special teams as well. Their passing and decision-making are crisper. They’re unlocking seams and attacking the middle of the ice as a cohesive unit, and it’s already resulted in some big goals. Since Carolina has the stronger roster on paper (especially with Charlie McAvoy and Lindholm sidelined), maintaining this efficiency on the power play will prove vital to the Bruins’ hopes of pulling off an upset.

Overall, Cassidy’s tweak has yielded phenomenal returns. In Games 1 and 2, Bergeron, Marchand and Pastrnak combined for three points and a -8 rating. In Games 3 and 4, they delivered 16 points and a +10 rating. Night and day. Not only are they littering the scoresheet, they’re also suffocating their opposition. Sebastian Aho and Andrei Svechnikov’s production went from five points in Carolina to zero in Boston.

Of course, the challenge will be greater once the series shifts back to Raleigh and the Hurricanes can dictate the matchups. Nevertheless, the Bruins made one massive adjustment that has altered the entire outlook of this battle.

Reassembling the Perfection Line has saved their season in much the same way that breaking it up did months ago.