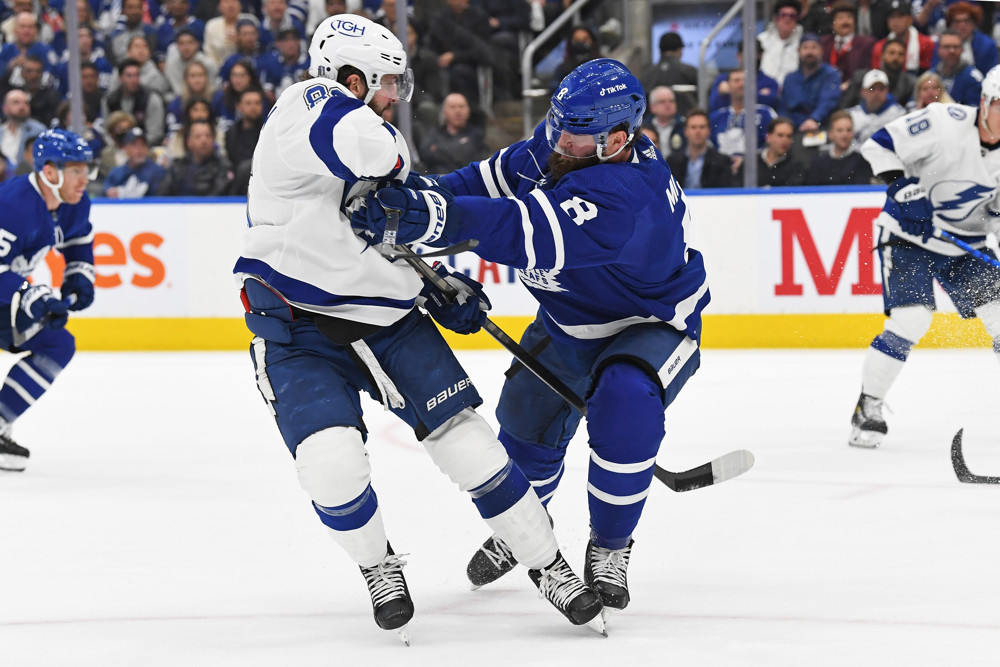 Two years ago, Nikita Kucherov and Brayden Point shredded opponents on the road to their first Stanley Cup. They were virtually unstoppable from start to finish. While the Tampa Bay Lightning reached the mountaintop again in 2020-21, the path to victory was very different. The team’s offensive leaders struggled to mount much of a threat at even strength, instead feasting on a clinical and opportunistic power play. In fact, Kucherov, Point, Steven Stamkos and Victor Hedman all produced more on the man advantage than at 5-on-5 during their 23-game run to repeat as champions.

That scenario is unfolding once more in the Lightning’s first-round series against the Toronto Maple Leafs.

Following a humbling 5-0 loss in Game 1, they rebounded on Wednesday with a 5-3 win headlined by three goals on the man advantage. Though Game 2’s special teams breakthrough was certainly welcome, it didn’t come out of nowhere. Toronto’s power play sputtered down the home stretch (16th in the league since April 1), whereas the Lightning ranked second over that same span. This is the ace up their sleeve.

Before diving into what went right for Tampa Bay in Game 2, we need to examine what went wrong in Game 1. The Lightning were handed a glorious opportunity when Kyle Clifford threw a senseless hit on Ross Colton that resulted in a five-minute power play. Unfortunately, they couldn’t even get out of the starting blocks because of sloppy zone entries:

The reason this power play is such a menace is the variety of ways it can hurt you. That applies to the entries as well. Tampa Bay prefers a drop-pass setup, but it can improvise thanks to its killer instinct and the skill sets featured on its top unit. Kucherov is an elusive and silky-smooth playmaker, Hedman is a strong passer and Point is a burner who pushes defenders back. On Monday night, we saw a much more limited range of options. The Lightning had a one-track mind, repeatedly passing teammates into traffic or skating into it themselves.

Credit goes to the Leafs for their swarming, high-pressure penalty kill, of course, but Tampa Bay’s execution was downright lousy. It was as though its best players had suddenly forgotten how to pick defenses apart after doing so without breaking a sweat for two years.

The skating, the side changes, the deception. It was all back on Wednesday, and the Leafs couldn’t handle the Lightning’s ability to continually shift the point of attack. They would hunker down and prepare to stop Kucherov only for him to slip a pass to an onrushing Point for easy access to the offensive zone. There was a definite emphasis on employing him as a pass recipient rather than a puck-carrier. With Kucherov’s knack for misdirection and Point’s sheer pace, the Lightning sliced through Toronto’s front all night.

Retaining control at the offensive blue line afforded the team’s best elements plenty of quality touches. That’s only half the battle, though. The next step is managing the puck. On the Lightning’s power play, the onus falls squarely on Kucherov.

He’s the straw that stirs the drink—and it’s fair to say he wasn’t himself in Game 1. It was one of his worst postseason showings in a long time:

Kucherov was surprisingly inaccurate on Monday. He bungled a number of routine passes that would have kept the ball rolling for the Lightning. More importantly, the Leafs have done their homework. They know he likes to dish from his spot on the right flank, so they stayed home and dared the Russian dynamo to shoot. He didn’t really want to. Consequently, he either flung hopeless passes into the middle of the ice or took if-I-have-to wristers.

On the rare occasions when Tampa Bay did draw up a promising design, it let itself down at the last second. Kucherov couldn’t feather the puck past a diving TJ Brodie. Point couldn’t beat Jack Campbell on a patented bumper look. Stamkos flubbed a gift-wrapped one-timer in front of a gaping net.

It was simply a nightmarish performance for the entire top unit.

But it recovered in Game 2. Kucherov, in particular, reminded the league of why he comfortably led the past two playoff campaigns in scoring. His telling adjustment was a return to true dual-threat status. Right from the outset, he made it a point to pull the trigger with conviction:

Not every bid reached Campbell. It didn’t matter. He sold his shot early and often, which transformed the Lightning’s power play from listless to surgical. Toronto’s penalty-killers had no idea what he was cooking up. A bit of apprehension set in. When they played off him, he called his own number. When they pushed up on him, he carved them open. Both the team’s puck movement and passing lanes were significantly cleaner on Wednesday.

The rewards of Kucherov’s more assertive tack were plain to see: He whistled a shot past Campbell in the second period and then buried the Leafs by connecting with Point for the 5-1 marker.

Look, these aren’t the same Lightning without the Coleman-Gourde-Goodrow line. They aren’t as relentless or capable of silencing opposing stars. Through two games, Matthews and Marner have been nothing short of brilliant (5 points apiece). On the whole, Toronto has already proven it can hang with Tampa Bay at even strength, as it owns 50.8% of the expected goals and 71.4% of the actual goals.