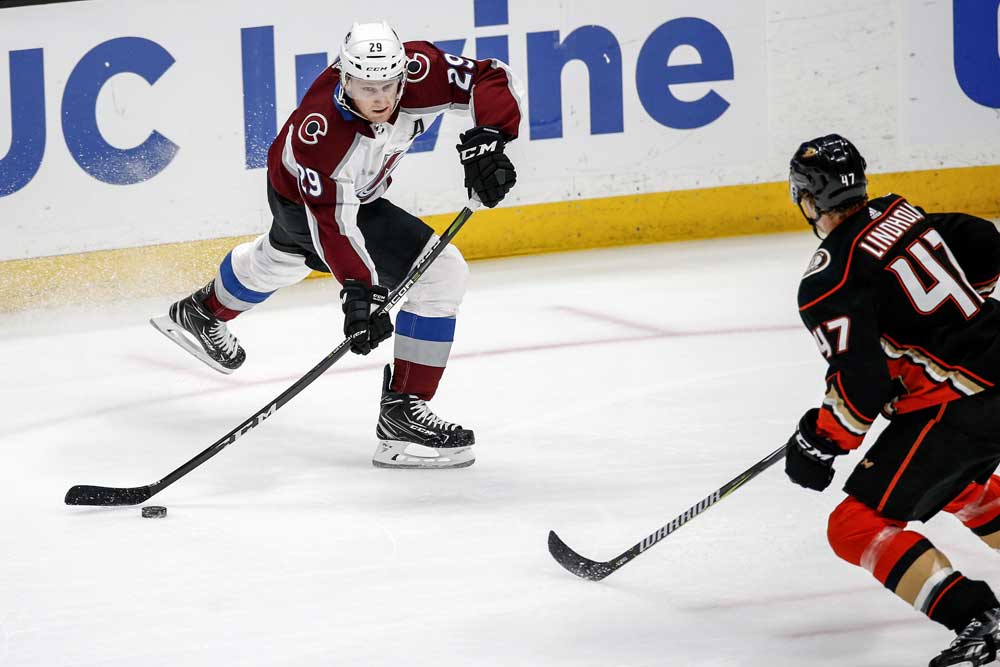 After a 97-point, MVP-caliber performance last year, Nathan MacKinnon has been joined at the offensive pinnacle by linemate Mikko Rantanen in 2018-19. The dynamic duo occupies the top two ranks in the scoring race and has offered electrifying displays that are worth the price of admission by themselves.

If the Colorado Avalanche can get significant contributions beyond their bell cows, this could become a Cinderella season.

So far, however, we’ve seen a tale of two teams: The Avs dominating opponents with their first line…and the Avs struggling with nearly everyone else. This stark contrast could ultimately spell their doom, but as it stands, top-heavy showings have yielded a 19-11-6 record (3rd in the Central Division). Head coach Jared Bednar doesn’t have his troops dominating in puck possession (49.2 CF%, 21st), but they’re converting their touches into scoring chances (51.6 SCF%, 10th).

The key moving forward, then, will be for the supporting players to translate their opportunities into goals.

Obviously, the first line is thriving in that regard. Rantanen leads the league with 58 points in 36 games, whereas MacKinnon is in hot pursuit with 55 points of his own. Captain Gabriel Landeskog (42 points in 36 games) rounds out the unit with his net-front presence and three-zone fundamentals. Every shift they take together is potentially game-changing, drawing viewers to the edge of their seats.

It’s not just a flashy spectacle either. They offer both style and substance.

While no one will confuse the unit for a true two-way force, it still governs a significant chunk of the action. Together, they control 53.7% of the shot attempts, 55.8% of the scoring chances and 66.0% of the goals scored at 5-on-5. Those are phenomenal results against stiff competition.

Aside from raw talent and greater familiarity in Rantanen’s third year, the line is clicking because each forward brings a different dimension to the table.

MacKinnon’s blazing speed is a sight to behold. His first few strides are so powerful that he often leaves defenders in the dust before they even recognize the need to back off. When they do manage to stay in front of him, he’s already inflicted some damage by putting them on their heels and thus opening up extra room for his partners in crime. Down low, he’s as strong as a bull on the puck and uses his edges well to create separation.

Rantanen, meanwhile, is all about vision. He processes the game as intelligently as anyone in the NHL right now, spotting the chink in the opposition’s armor and exploiting it over and over again. Soft hands aren’t particularly useful if you don’t have the toolbox to leverage them. Rantanen has hockey IQ in spades, and he’s paired it with increased confidence to fly up the scoring leaderboard.

Finally, Landeskog is the man assigned with the grunt work. In addition to his decent finish and tenacity in the corners, his defensive conscience allows his linemates to run wild.

Coaches are specifically game-planning to stop them, and it doesn’t matter at all. At even strength or on the power play, they’re skating circles around their opponents. If they’re not screaming by you, they’re passing right through you. Sometimes, it’s both on the road to a highlight-reel goal.

The issues lie lower on the depth chart.

In a nutshell, the remainder of Colorado’s forwards are struggling to break even in goal shares. Some, such as Alexander Kerfoot (40.7 GF%), Colin Wilson (41.4 GF%) and Matt Nieto (42.3 GF%), aren’t even remotely close. Opponents aren’t running them into the ground every shift, but these players are certainly losing the battle on the scoreboard — and goals determine the bottom line. The Carolina Hurricanes, who sit far outside the playoff picture despite leading the league in scoring chances, know this all too well.

To add salt to the wound, Wilson suffered a shoulder injury on Friday night and is listed as week-to-week. He hasn’t been all that effective (13 points in 35 games), but his absence will force someone to step into a role they may not be qualified for.

2016 10th overall pick Tyson Jost (11 points in 32 games) could enjoy that promotion, although he hasn’t really earned it. While the 20-year-old has revealed glimpses of promise, his lack of top-end speed and physical immaturity are preventing him from controlling the play (46.6 CF%, 47.3 SCF%, 44.0 GF%). Without the pace to capitalize on the rush or the guts to win in the trenches, he’s just kind of…there.

Fortunately, JT Compher (13 points in 20 games) has displayed hunger and engagement in the dirty areas. The 23-year-old returned from injury in late November to bolster the forward core. Regardless of whom he lines up with, he provides a welcome dose of hustle and all-around utility.

Overall, however, the complementary forwards don’t have an identity. They’re the “other guys.” They’re neither clinical enough to turn their opportunities into markers nor sound enough to stay afloat in the plus/minus column.

With the 17th-ranked defense and 12th-highest on-ice save percentage, the team is in a decent position behind its forwards. Tyson Barrie is leading the charge on the blue line as a mobile play-driver. He has 24 points in 32 games with a 52.1 CF%, 51.6 SCF% and 57.8 GF%. Despite his reputation, he’s also learned to take more calculated risks and limit his mistakes. Striking a balance between trying to create offense and upholding your defensive responsibilities is tricky, but he’s made progress in that department.

Erik Johnson solidifies the second pairing. While he’s never justified his selection as the first overall pick in 2006, the 30-year-old remains dependable in his end. He keeps good gaps in the neutral zone and covers opponents tightly in the slot. He should help youngster Samuel Girard mature over time.

Colorado simply needs more scoring depth up front. At the moment, opponents are salivating at the thought of MacKinnon, Rantanen and Landeskog getting off the ice, which naturally piles even more pressure onto their shoulders.

The past five games have highlighted the pitfalls of life as a one-line squad. Against Montreal and Dallas, the top unit imposed its will and allowed the club to prevail. Against St. Louis, the New York Islanders and Chicago on Friday night, MacKinnon and Rantanen were kept in check. Colorado lost each of those contests.

How much more can they possibly give the Avs? They’re on pace for about 130 points apiece. The line’s PDO sits at an eye-popping 104.0 too. That’s an awfully tough number to sustain over the long haul.

Assuming their puck luck regresses even slightly, Colorado will find itself in a world of trouble because its GF% regularly plummets once MacKinnon and Rantanen leave the ice. Every game, the top dogs are granted 22 minutes to drag their club to a 60-minute win. The margin of victory is razor-thin. The Avs already rank 30th in one-goal games and 20th when trailing first. If they can’t blow opponents out of the water early on, can they even hold onto their playoff seed?

As the season unfolds, Western Conference clubs everywhere are just waiting for the other shoe to drop.