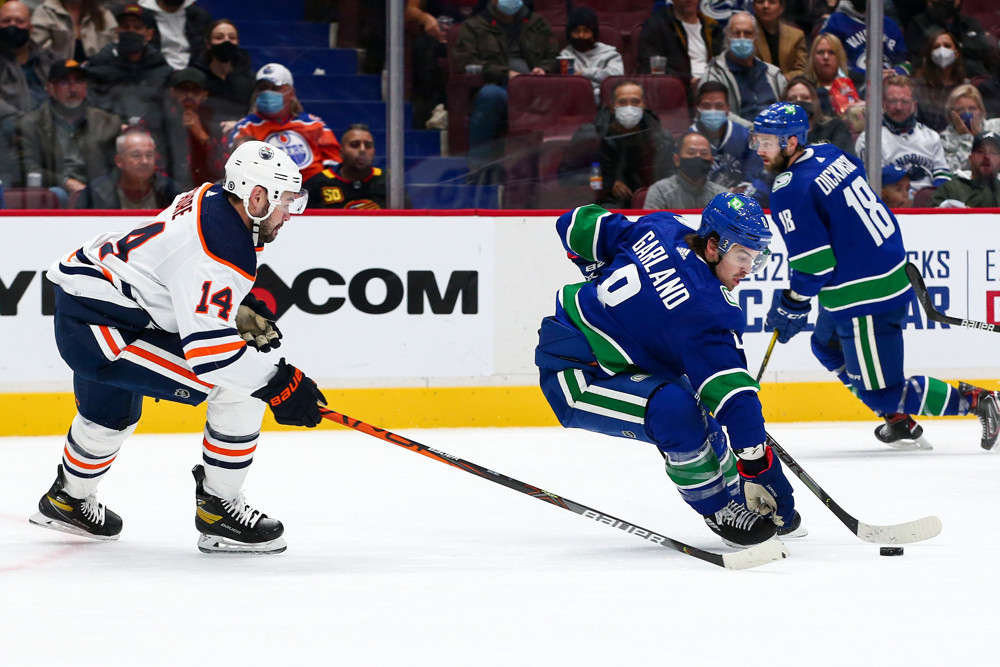 For the Vancouver Canucks, the 2021-22 season hasn’t been much prettier than its COVID-riddled predecessor.

Big-name offseason acquisition Oliver-Ekman Larsson has enjoyed the change of scenery, but he hasn’t exactly dazzled. The Lotto Line consisting of Elias Pettersson, J.T. Miller and Brock Boeser has proven so inconsistent that it gets broken up and reunited every other night. Bo Horvat looks more like a passenger than a team captain. Outside of Thatcher Demko, Nils Hoglander and Conor Garland, there hasn’t been much reason for optimism.

With that said, Garland has been great for the Canucks thus far.

Those who weren’t familiar with the late bloomer prior to the OEL deal might have viewed him as an afterthought, but he’s won over both the city and the coaching staff in short order. The 25-year-old has improved year over year since his debut in 2018-19, ranking 36th among all forwards in points per 60 minutes a season ago. That scoring rate has risen to even greater heights through 14 contests, as he ranks 14th in points/60 and is generating opportunities left and right for a Canucks squad that is otherwise in disarray.

While his production (11 points) is indeed terrific, perhaps the most striking element of his game is his competitive streak. He isn’t a thumper—don’t tell Filip Zadina that—but even at 5’10” and 165 pounds, he’s utterly fearless:

His willingness to barrel into the corners and absorb contact in order to regain possession draws a stark contrast to his more…hesitant teammates. Too many Canucks are making business decisions rather than biting down on their mouthpiece and simply doing what must be done. Garland charges headfirst into the line of fire because he knows you don’t win hockey games by dawdling on the perimeter.

Despite his stature, he’s taken the 14th-most hits among forwards this season. This kid isn’t afraid of anything. Knock him down, and he’ll get right back up for more.

That determination spills over to his puck management as well. He displays a remarkable ability to extend plays and build waves of momentum by spinning off defenders and stick-handling in a phone booth. He’s simultaneously a puck hound and magnet. It just seems to follow him around:

No Canuck has benefited more from Garland’s play than rookie Vasily Podkolzin. The 10th overall pick in 2019 appeared lost early in the season, gripping his stick in an effort to make an impact on the attack when he’s most effective as a tireless meat-and-potatoes worker. He possesses good wheels and a solid build, and he needs to leverage those strengths in the trenches.

With the knowledge that Garland can drive the action, Podkolzin can focus on the details of the game and develop at his own pace. Meanwhile, Garland has enjoyed playing alongside a puck-retrieving, high-motor tank.

Together, they’ve registered a 60.5 CF%, 54.5 SCF%, 56.5 HDCF%, 51.8 xGF% and 66.7 GF%. Those numbers are significantly better than what they’ve mustered apart. And that’s with a couple of different centers (Jason Dickinson and Horvat) between them. There’s clearly some magic there, and Vancouver would be wise to keep Garland and Podkolzin joined at the hip.

Regardless of his linemates, though, Garland has provided the Canucks with stellar playmaking. He currently ranks third leaguewide in assists/60. He boasts outstanding hockey IQ, quickly surveying the defense and setting up his teammates in favorable situations:

Granted, he isn’t scoring at his usual rate, but he’ll close that gap if he continues to perform like he has through 14 games. He’s a clever player in possession, unlocking defenses with a healthy dose of deception. Whether he’s pulling the trigger off beat or claiming space that blueliners didn’t believe he could take, he understands how to catch opponents with their pants down:

Combined with his marksmanship, his persistence, playmaking and savvy make for a potent dual threat on offense.

Now, it goes without saying that he won’t single-handedly save this team. There are too many issues plaguing it at the moment. For whatever reason, Green can’t get his troops to play to their potential. The top six is unreliable. The defense is porous. The only sense of drive and purpose is coming from newcomers or prospects.

Barring a major shakeup, this doesn’t have the makings of a successful year in Vancouver. But if we look beyond 2021-22, the outlook becomes rosier.

Pettersson is too skilled not to bounce back. Demko is a legitimate starter entering his prime. Ekman-Larsson’s contract won’t represent a complete albatross if he can maintain his level of play. Quinn Hughes has recovered from a wretched campaign, delivering great pace and creativity from the back end. Hoglander and Podkolzin look the part of middle-sixers at the very least. And Garland, signed for four more years at an affordable $4.95 million AAV, is a perfect fit to grow alongside this core.

He buzzes around the ice and rekindles any line he’s on. He can create offense without breaking a sweat but chooses never to take a shift off anyway. He’s overflowing with guts, smarts and talent.

Amid another rough season for the Canucks, his arrival constitutes quite a silver lining.