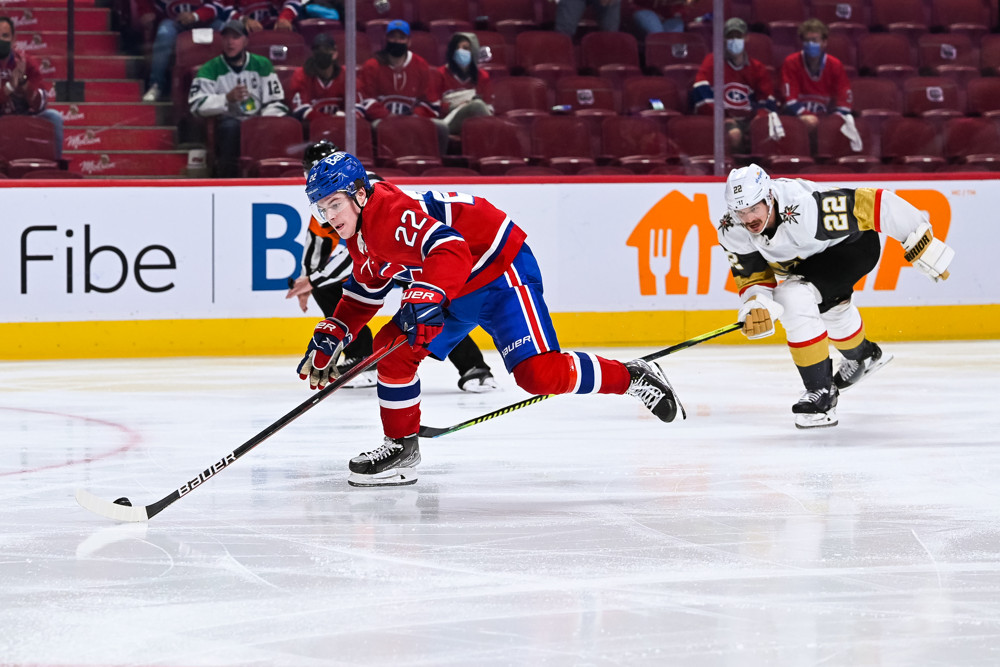 For the second straight game, the Montreal Canadiens came screaming out of the gates against the Vegas Golden Knights. They skated, pursued the puck and generated chances as though their lives depended on it. By the end of the opening frame, they owned 85.4% of the expected goals.

And for the second straight game, their opponent took over the remainder of the proceedings. Vegas’ push for a comeback resulted in two goals and a 59.2 xGF% over the next two periods.

Why don’t the Habs play with this fervor and purpose for a full 60 minutes?

It’s simple enough: They can’t. They don’t have the horses to run with the Golden Knights for three entire periods—let alone chase them. Trading blows as the game wears on is a recipe for disaster. As such, it’s imperative that they establish a lead in order to batten down the hatches and wind down the clock. They need to get out ahead. Dominique Ducharme’s club is now 9-1 in the playoffs when scoring first. When its opponent claims first blood, Montreal is 0-3.

The battle for the first goal is the war.

Unlike in Game 1 of this third-round matchup, however, their early charge yielded actual goals this time. Joel Armia’s opener was reminiscent of Golden Knights hockey, as Montreal pressured Vegas into submission, dominated in the trenches and ultimately pounced on a loose puck before Marc-Andre Fleury could recover:

By the time Paul Byron made it 3-0 on a breakaway, Vegas was already in the very position Montreal was hoping to avoid: desperately searching for offense at the expense of your defense. Granted, Fleury’s wild-man tactics didn’t help his team’s cause:

That was the eventual game-winner in a 3-2 white-knuckle Habs win—and it only happened because Montreal forced Vegas’ hand right from the drop of the puck.

From that goal onward, the Canadiens dug their heels in and did their best to slow down a hungry Vegas squad that now had to consider time as an additional foe. It wasn’t a brilliant showing by Montreal, but it got the job done. That has essentially defined this team throughout the playoffs. Across the lineup, the players are prepared to deliver the contributions required to prevail—whether it’s a block, a diving stick check, taking a hit to guarantee a clearance, etc.

There may not be a gutsier group left in the final four. They don’t possess the biggest names, they don’t play the sexiest brand of hockey and they’re only winning by a margin of 0.15 goals per game…but they’re winning all the same.

On Wednesday night, they roared out to a three-goal cushion and then flashed their fortitude and cohesion to survive Vegas’ onslaught. Pundits are quick to point to Carey Price (2.14 GAA, 93.0 SV%) as the engine behind the club’s success, but he didn’t exactly steal Game 2 for Montreal. He made the saves he needed to against an opponent that lacks pure marksmanship.

Though these are all solid stops, they aren’t jaw-dropping by any means:

In fairness, he did come up huge when Martinez snuck in through the backdoor to preserve the Habs’ 2-0 lead:

Beyond that sequence, however, the Golden Knights were limited to half-chances and contested shots. Even when DeBoer’s troops did reach higher-percentage areas, Montreal’s players held strong. Rather than hoping to carry the play, the Canadiens focused on matching Vegas’ urgency at the point of attack, consistently throwing their bodies in front of pucks and disrupting passing lanes:

No, it wasn’t pretty. Forget style points, though. This is the sort of effort that wins playoff games:

It doesn’t matter how far you bend if you never break. The Canadiens didn’t on Wednesday night, allowing them to escape with a 3-2 road win and a crucial split as the series shifts to Montreal.

The next challenge awaits in Game 3: Getting ahead in the series.