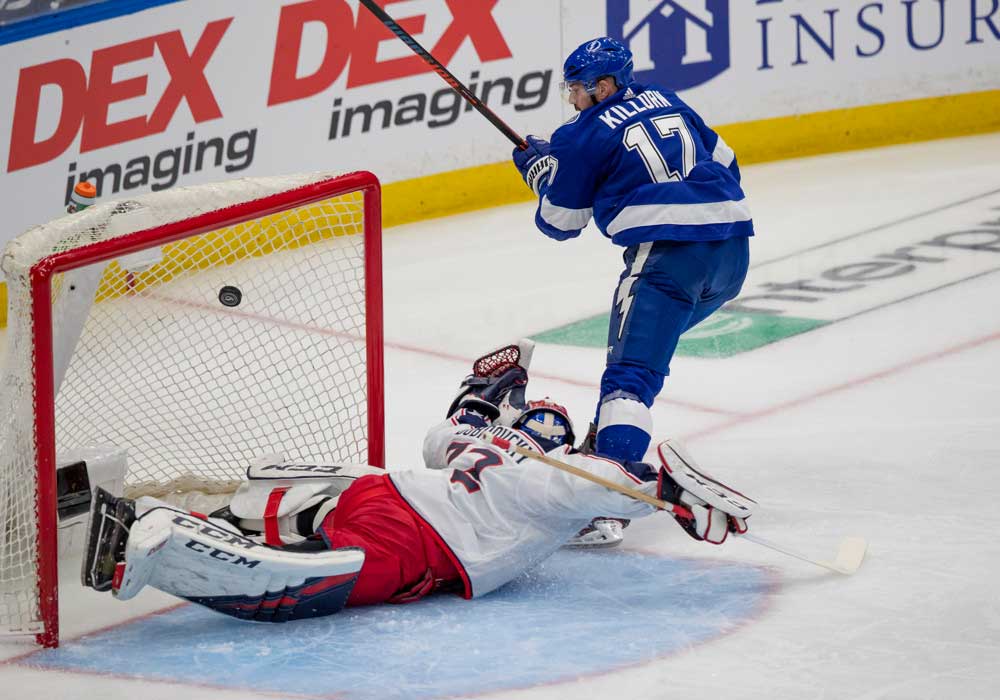 After 1,271 regular season games to battle for playoff positions, the NHL’s postseason faces off on April 10th. It’s going to be a grueling two months of hockey since 16 wins are needed to hoist the Stanley Cup.

Let’s take a quick look at the first-round matchups.

With Tampa going 62-16-4 to top the league it’s easy to predict them over a Jackets’ squad which went 47-31-4 and finished 13th overall. But there’s a lot of pressure on the President Trophy winner’s to go all the way and if Columbus can slow them down this isn’t going to be a walk in the park for Tampa. The key for Columbus is to stay out of the penalty box like they did in the regular season since Tampa’s 28.2% power-play led the league as did their 3.89 goals per game. Meanwhile, the Tampa and Columbus penalty-killing units tied for first at 85%.

Columbus improved in late February by picking up Matt Duchene and Ryan Dzingel while keeping Artemi Panarin and goalkeeper Sergei Bobrovsky. Since then, they posted a 14-8-1 mark which was third-best in the league. Bobrovsky led the way to the postseason with a 6-1 record in his last seven starts with three shutouts, a 94.7 save percentage and a 1.50 GAA. However, he has a bad habit of playing sub-par playoff hockey with a 5-12 mark in Columbus, a GAA of 3.37 and an 89.8 save percentage.

The Jackets have some excellent players, but Nikita Kucherov, Steven Stamkos and Brayden Point are better and Andrei Vasilevskiy is a solid playoff goalie. Columbus lost all three season games to Tampa and were outscored 17-3.

Prediction: Columbus should win a game or two, but look for Tampa to triumph.

Home ice has been crucial to Boston the last two times these teams met and they have the advantage once again. The Leafs blew leads in the seventh game of the last two series in Boston and have only themselves to blame for self destructing. Boston went 49-23-9 to finish third overall while Toronto was seventh at 46-28-8. The Leafs ranked fourth in goals with Boston being 11th, but Boston was third defensively and Toronto 20th. Much was made of Toronto’s offense, but Boston’s power-play was third at 25.9% with Toronto’s eighth at 21.8%. Both teams had a 79.9% penalty-killing rate and Boston won the season series 3-1 and outscored Toronto 16-10.

Toronto has added John Tavares and Jake Muzzin to the roster since last year, but they scored fewer goals this season after letting James van Riemsdyk and Tyler Bozak go among others. Toronto couldn’t handle the Patrice Bergeron/Brad Marchand/David Pastrnak line in last year’s series or during the 2018/19 regular season and it Leafs’ coach Mike Babcock generally wastes his time trying to match lines. The only Leaf star who showed up in the playoffs last year was Mitch Marner while Auston Matthews, William Nylander and goaltender Frederik Andersen were on hiatus. That has to change.

Prediction: Deja Vu all over again with Boston winning a long, close series.

Washington finished fourth in the league at 48-26-8 and won the Metropolitan Division while Carolina ranked 11th at 46-29-7 and were the East’s first wildcard team. Washington were fifth in goals scored with Carolina 16th, and had a better power-play, but the Hurricanes were better when it came to goals-against and penalty killing. Washington is attempting to repeat as Stanley Cup champions while Carolina may just be happy to be in the postseason for the first time since 2009. Carolina caught fire after picking up Nino Niederreiter in a trade with Minnesota and went 24-10-2 down the stretch.

Even though Carolina goaltenders Petr Mrazek and Curtis McElhinney had excellent seasons they are still question marks, but Mrazek has shined in the playoffs with a 93.8 save percentage, three shutouts and a 1.83 GAA in 10 previous games. Washington went 4-0 in the season series with Alexander Ovechkin notching four goals and six points. Michal Kempny is injured for Washington and fellow blue liner Calvin de Haan is sidelined for Carolina. Goaltending will be the key as well as the Capitals’ superior experience.

For a full series preview:  Capitals-Hurricanes Matchup Offers No Room for Complacency

The Islanders surprised most experts by going 48-27-7 to finish fifth this season while the 44-26-12 Penguins were ninth. The Islanders didn’t score much as their offense ranked 22nd, but they were first in the goals-against average at 2.33 due to netminders Robin Lehner and Thomas Greiss. Pittsburgh ranked sixth in goals and 14th defensively. The Penguins also had the fifth-best power-play at 24.6% while the Islanders were third-worst at 14.5%. The teams’ penalty-killing was about equal with New York’s at 79.9% and Pittsburgh’s 79.7%.

New head coach Barry Trotz worked wonders with the Islanders, but they sacrificed goals scored while tightening up defensively. This could be a problem in the playoffs since they’ll be relying a lot on their goaltending and will be in trouble if they fall behind during games. With Evgeni Malkin, Sidney Crosby, Kris Letang and Phil Kessel leading the Pittsburgh offense it’s going to be a tough ride for New York. The teams went 2-2 in the season series, but Pittsburgh’s experience should be the difference in the playoffs.

50-25-7 record to rank second in the league. They scored 3.52 goals per game which also ranked third and their goals against was a decent ninth best. Colorado took the second wildcard spot in the West with the 17th-best record of 38-30-14. They ranked 10th in goals and 16th defensively. However, Colorado’s power-play was a bit better than Calgary’s at 22.0% to 19.3% while both penalty-killing units were in the bottom 11 of the league. Calgary’s high-octane offense and solid defense make them favorites and they won all three season games against Colorado.

Colorado has some fine talent in Mikko Rantanen, Gabriel Landeskog, Nathan MacKinnon and Tyson Barrie though. Rantanen’s status is in the air due to injury and he’s crucial to Colorado’s chances. If Calgary can contain the Avalanche’s top line then it’s all over quickly due to their superior scoring depth. The only question mark for Calgary is the goaltending duo of Dave Rittich and Mike Smith while Philipp Grubauer had a fine year in the crease for Colorado. Rantanen needs to be healthy and Grubauer has to play lights-out for the Av’s to advance. The Av’s failed to beat Calgary during the season and won’t win this series either.

Prediction: Colorado should win at least one game, but two at the most and Calgary to win.

San Jose had a productive season by finishing sixth at 46-27-9 while it may be surprising to hear Vegas was 16th at 42-32-7. The Sharks scored the second-most goals in the league at 3.52 per game while Vegas notched 3.00 an outing. San Jose struggled defensively though at 3.15 goals-against per night while Vegas allowed 2.78. The penalty-killing is a wash, but San Jose’s power-play went 23.6% compared to 16.8% for the Golden Knights. Vegas beat the Sharks in six games last year in the second round of the playoffs and the Sharks obviously want revenge.

The trouble is in the goaltending department for San Jose as Martin Jones had a poor season and he needs to quickly improve. Vegas sports a new-look team with the addition of experienced players such as Max Pacioretty, Mark Stone and Paul Stastny while the Sharks have added another Norris Trophy-winner in Erik Karlsson. This series will come down to goaltending. Vegas is set with veteran Marc-Andre Fleury while Jones has been shaky. However, if Jones can pick up his game the Sharks’ offense should carry them to the next round. It’s a big however though. Vegas was 2-1-1 against San Jose in the season

Prediction: This is a tossup and we’ll go with San Jose in seven.

Nashville didn’t play to their potential during the season, but still finished eighth at 47-29-6 while Dallas went a 15th-best 43-32-7 and took the first wildcard berth in the West. Neither team filled the net as Dallas had the fourth-least goals at 2.55 per game and Nashville had the 19th-most at 2.88. This could be a defensive battle since the Preds’ GAA was 2.59 and the Star’s was 2.44. Amazingly, Nashville owned the worst power-play in the league at 12.9% while Dallas’ was 11th at 21.0%. Meanwhile their penalty-killing was basically the same at just over 82.%.

Dallas goaltender Ben Bishop, who led the league in save percentage at 93.4, needs to stay healthy and Nashville’s power-play has to be better for each team to advance. Nashville’s blue line is arguably the most talented in the league though and if they play to their potential it’s going to be tough for the Stars to win four games. However, if Nashville goalie Pekka Rinne struggles like he did in last year’s postseason we could easily see an upset here. The Predators were 3-2 against the Stars in the regular season and this series should be just as close.

There wasn’t much separating these teams in the regular season with Winnipeg going 47-30-5 to rank 10th overall and St. Louis coming in two place behind at 45-28-9. The Jets scored more goals, but also allowed more and both teams had a top-10 power-play unit. There was a difference in the penalty killing though as Winnipeg were just 22nd at 79.2% and the Blues at ranked ninth. St. Louis turned their year around by going from last place in the league at the new year to coming within a point of winning the Central Division by going 30-10-5 in their last 45 outings to lead the league.

Blues’ rookie goalie Jordan Binnington should get a lot of the credit by going 24-5-1 with a league-best 1.89 GAA and a 92.7 save percentage. Winnipeg faded quite a bit as the season went on and struggled in most analytical categories. They do have scoring strength in Blake Wheeler, Mark Scheifele and Patrik Laine, but the Blues can counter with Ryan O’Reilly, Vladimir Tarasenko, David Perron and Brayden Schenn. Winnipeg may have won the season series 3-1, but they’ve been slipping and sliding while the Blues have improved dramatically. It’ll also be interesting to see how Binnington performs in the playoffs.