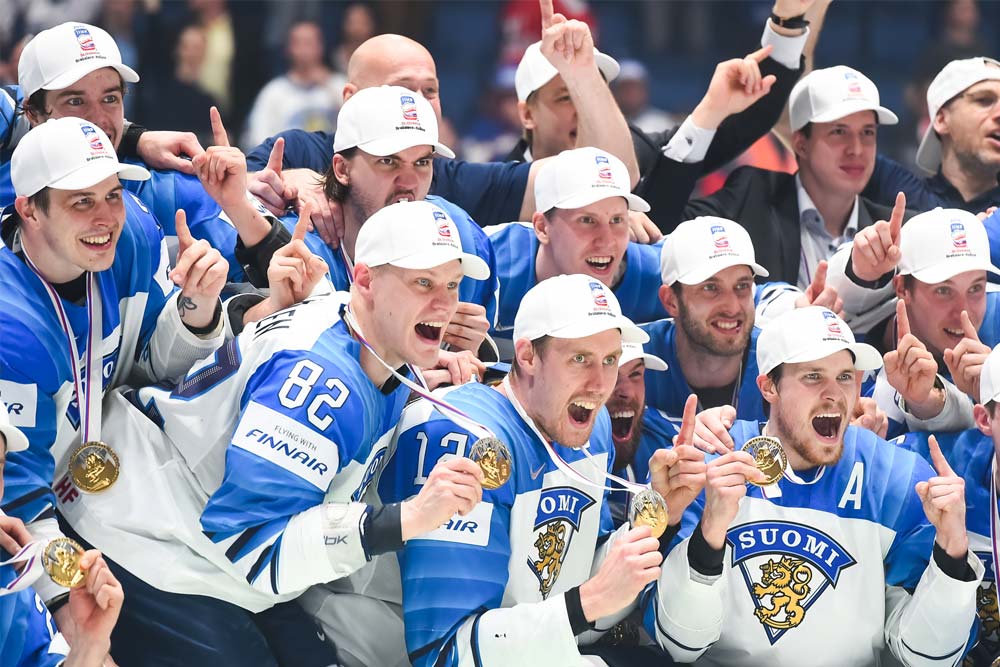 Finland took the gold medal at the 2019 IIHF World Championships in Bratislava, Slovakia with a 3-1 win over Canada on May 26th. Canada last won the event in 2016 and were hoping to tie Russia at 27 gold medals for the most in the tournament’s history. For Finland, it was their third gold and the second time they downed the Canadians 3-1 in the tournament as they also beat them in their opening contest. Since that loss, Canada had reeled off eight consecutive wins while outscoring the opposition 43-11 and entered the final as the betting favorites.

The Canadian squad was filled with NHL players who combined for a total of 357 goals between them this season. Finland’s team featured just two NHL players and neither of them managed to find the back of the net this year. In addition, seven of the Finnish side had never played in a tournament above the 18-year-old level.

Canada advanced to the final with a 5-1 beat down of the Czech Republic the day before in the semifinals while Finland upset Russia 1-0 in their final-four showdown. Finland’s last gold medal came in 2011 when the event was also held in Slovakia.

Finland skipper Marko Anttila was the scoring hero in the final with a pair of goals while Harri Pesonen notched the other. Goaltender Kevin Lankinen was a busy bee in net as Canada doubled Finland in shots 44-22. Credit must also go to head coach Jukka Jalonen and his assistants since many of the players chosen didn’t have any previous World Championship or international experience.

Finland surprised the Canadians with their physical play in the first period, especially in scrums after the whistle. They also had the best chance to open the scoring when Jere Sallinen was ruled to have been tripped on a shorthanded breakaway. Oliwer Kaski was given the task of taking the ensuing penalty shot but his feeble effort was easily saved by netminder Matt Murray.

However, Canada took the lead at the 10:02 mark when blue liner Shea Theodore snapped a shot over top of Lankinen’s catching glove. Finland started strongly in the middle period and tied the game courtesy of Antilla’s power-play marker at the 3:35 mark. Both teams had plenty of chances with Canada bouncing back in the second half of the period.

Anttila scored the game-winning goal exactly 20 minutes after tying the contest as he put Finland up 2-1 at the 3:35 mark of the final frame. Finland then made the same mistake Switzerland did against Canada with a goal lead as they tried to sit on it. Canada made the Swiss pay for it in the quarterfinals by scoring the equalizer with just 0.4 seconds left in the game and then won it in overtime.

Canada poured the pressure on Finland and created numerous chances to pull even but couldn’t beat Lankinen and his shot-blocking teammates again. Pesonen then scored an insurance marker with left on the clock and that capped off Finland’s Cinderella story at the tournament.

The bronze medal was also on the line the same day with Russia beating the Czech Republic 3-2 in a shootout. Russia has now won five medals in the past six years while the Czech Republic hasn’t captured one since 2012 when they earned a bronze. Their last gold was in 2010 when they beat Russia. Ilya Kovalchuk and Nikita Gusev notched goals in the shootout for the win while goaltender Andrei Vasilevskiy stopped all five shots for Russia. He also made 48 saves during the game and 10-minute overtime period as the Czech Republic outshot Russia 50-31.

The Russians last won a medal in 2017 which was also bronze with their last gold coming back in 2014. Russia had won eight straight games in the tournament until falling 1-0 to Finland in the semifinals. They took the lead at the 13 minute mark of the first period through Mikhail Grigorenko, but Michal Repik tied the game only 41 seconds later. Dominik Kubalik put the Czech Republic in front at the 18:34 mark to give them a 2-1 lead after 20 minutes. Russia didn’t waste any time in pulling even as Artyom Animisov netted the equalizer at the 37 second mark of the second period.

Both teams had excellent chances to win it in the 10-minute, three-on-three overtime, but a shootout was needed. Russia also beat the Czech Republic in the preliminary round when Vasilevskiy posted a 3-0 shutout.

Perhaps in a bit of a puzzling move, forward Mark Stone of Canada was named the MVP of the tournament by the media. The 27-year-old who plays with the Vegas Golden Knights notched eight goals and six assists for 14 points in the event and led the way in goals scored. Stone was also named to the Tournament All-Star Team along with fellow NHL forwards Jakub Voracek (Philadelphia Flyers) and William Nylander (Toronto Maple Leafs). The blue liners were Czech Republic defenseman Filip Hronek (Detroit red Wings) and Mikko Lehtonen of Finland. Russian Andrei Vasilevskiy of the Tampa Bay lightning was the All-star goalie. This team was also selected by the media.

Nylander, who won the MVP award two years ago was the top point-getter in the event with 18 from five goals and 13 helpers in eight contests. Russian teammates Nikita Kucherov and Nikita Gusev were next with 16 points each. Kucherov of Tampa Bay had six goals and 10 assists while Gusev of the Vegas Golden Knights chipped in with four goals and 12 helpers. Voracek was fourth in scoring with four goals and 12 assists while Stone was next with his eight goals and six helpers. Canadian Anthony Mantha of the Detroit Red Wings had seven goals and seven assists as did Michael Frolik of the Czech Republic and Calgary Flames.

Vasilevskiy was the best between the pipes with a 1.60 goals-against average, a save percentage of 94.6 and a pair of shutouts. The tournament organizers selected Vasilevskiy as the best goalie with Hronek as the best blue liner and Kucherov as the top forward. It was the second time in the last three years Vasilevskiy took home the award.