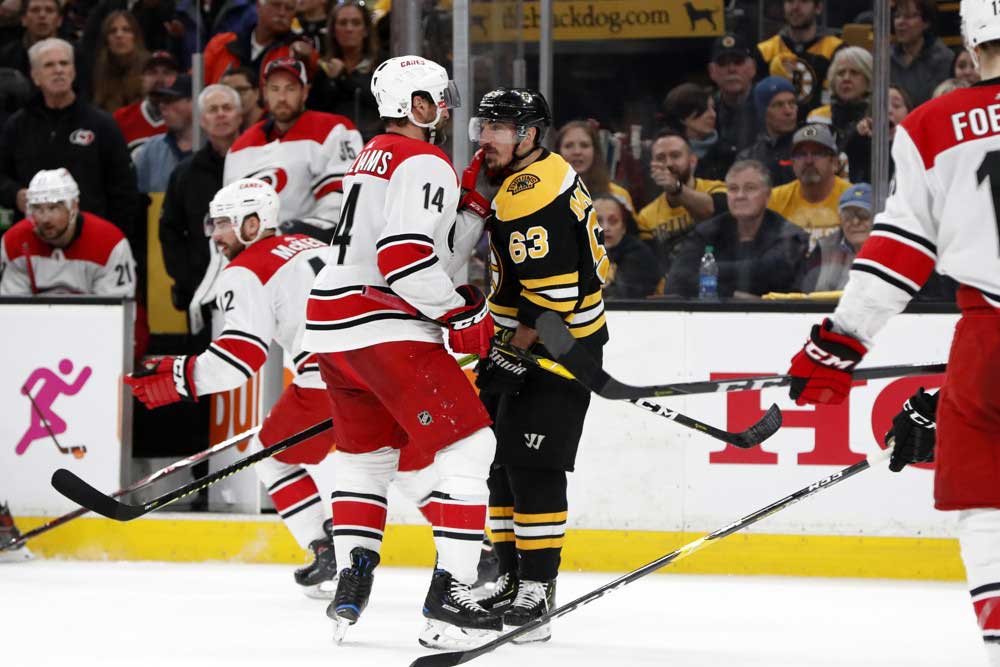 Working hard isn’t necessarily working smart. For much of the postseason, the Carolina Hurricanes have done both. They stayed calm under pressure and picked away at Washington’s weaknesses over seven games in Round 1. Against a more defensive New York Islanders squad in the conference semifinals, they displayed great patience and opportunism. Regardless of the opponent, they’ve managed to play at a furious tempo while remaining even-keeled throughout. Despite icing the fifth-youngest roster in the league, they’ve exhibited polish beyond their years this spring.

The rough edges are showing now, though.

In the opening two games of the Eastern Conference Final, Carolina has unraveled in the face of a battle-tested unit that’s much more familiar with the peaks and valleys of playoff hockey. The Boston Bruins understand that they won’t dominate every shift, so they’ve learned when to hold down the fort and when to let it fly. They have the goaltending, seasoned veterans and depth to weather any storm, and they’ve ridden that composure to a 2-0 series lead.

At the moment, Rod Brind’Amour’s troops look rattled by Boston’s unflappable nature. Teams usually buckle under their pace and volume, but most of its core — Zdeno Chara, Patrice Bergeron, Brad Marchand, David Krejci, Tuukka Rask, Torey Krug — has been there and done that. They’re the ideal mentors for young guns like David Pastrnak and Jake DeBrusk as well as blueliners Charlie McAvoy and Brandon Carlo. As a result, the Bruins are keeping their eyes squarely on the prize and playing within themselves rather than forcing the issue.

To be clear, the Canes aren’t petering out. They’re still brimming with energy…and that’s precisely what the Bruins are using against them. Since Carolina is the less talented group in the matchup and has only led for 13 minutes compared to Boston’s 63, it currently finds itself playing catch-up, over-committing and digging itself an even larger hole. Stripped of its focus, the manic hustle that defines the team can become self-destructive.

Bruce Cassidy’s men know that this aggressiveness will spill over if the Canes fall behind, so Boston is content to lay off the gas until the right counterattacking window opens up. Then it strikes before Carolina can make heads or tails of the situation.

Each turnover, squandered opportunity and goal against is tearing at the fabric of the Hurricanes’ structure. The players are attempting riskier passes and getting caught up ice. The defensemen are recklessly surging ahead to supplement a forward corps that isn’t cutting it on its own. Brind’Amour’s airtight scheme has devolved into Swiss cheese, which often leaves Petr Mrazek (2.73 GAA, 89.4 SV%) to fend for himself. Considering the 27-year-old has struggled to carve out a full-time role as a starter, he’s hardly the right goaltender to steal games for his club when it gets sloppy.

The Canes can’t afford to veer off the rails. Their fate is tied to their trust in the process, but as it stands, they just can’t help themselves. When they were trailing the Capitals early in the first round, there was hope because there were visible chinks in the defending champions’ armor. The Bruins may have sore spots of their own, but they’ve concealed them thus far. Carolina is getting bent out of shape just trying to find one foible, one path to victory, one reason for optimism.

Unfortunately, the more aggressive they are, the easier it becomes for Boston to dismantle them.

The Bruins are controlling 50.4% of the shot attempts and 52.1% of the scoring chances at 5-on-5. However, they own a whopping 67.6% of the high-danger opportunities. Every time the Canes push forward in hopes of generating an attack, Boston makes them pay with a counter-punch flush on the chin.

On Sunday afternoon, the floodgates opened for Boston after Mrazek conceded a soft, bad-angle goal to Matt Grzelcyk in the first period.

The team that was so effective at staying poised and playing from behind was then nowhere to be found, as it lost its cool and allowed glorious chance upon glorious chance to the Bruins. This amounted to an 80.9 HDCF% advantage and six goals for Boston.

Throughout Game 2, the Hurricanes kept letting their temper get the best of them. With the score at 3-0 in favor of the Bruins, 37-year-old captain Justin Williams wasted time and energy trying to square off with Marchand, a noted pest who only drops the gloves on his terms. He was never, ever going to fight under those circumstances. Williams’ poor decision led directly to Grzelcyk’s second tally of the afternoon and effectively killed any thought of a comeback.

#NHLBruins Brad Marchand getting under the skin of #NHLCanes Justin Williams pic.twitter.com/RIvKIGMnJZ

Following Danton Heinen’s 6-0 goal, Dougie Hamilton took a cheap shot on the forward to sum up a couple of games in which he’s looked more like a loose cannon than a marksman.

Instead of moving on to the next shift, they engaged in petty, self-serving behavior. Conversely, Boston never wavered in spite of tension boiling over. To the Bruins, this isn’t personal — it’s just business.

Brind’Amour’s club will need to find some of that discipline at home. The Hurricanes can’t skate by on talent alone because Boston has them beat in that department. They require all hands on deck, and that means quieting any desire for retribution in order to see the big picture: If they can’t get it together by Tuesday night, their Cinderella season will be hanging by a thread. The Bruins have scored four power play goals in two games. As if their lineup wasn’t difficult enough to deal with, spotting them chances on the man advantage is just begging for trouble.

Why devote any time to getting even with a pound of flesh when you could use that time to get even on the scoreboard? After all, it’s already running out.

Of course, discipline goes beyond staying out of the box. It involves the club’s structure as well. Carolina must rediscover the three-zone fundamentals Brind’Amour has drilled into his players’ brains: Tighten the spacing on the forecheck, only pinch when there’s forward support, don’t blindly chase the puck at the expense of sound positioning. Do your job. Attempting to play the hero against the Bruins won’t get you far. Work hard and work smart.

Granted, Rask (2.02 GAA, 93.7 SV%) is another tough puzzle to solve. He’s been sensational between the pipes and is likely the favorite for the Conn Smythe Trophy right now, but the Canes will cross that bridge when they get there.

First, they need to get their heads screwed on straight in order to stop the bleeding. Doling out hits and flying up the ice is fine in certain situations. You can’t just throw all caution to the wind, though. Remember the purpose behind those actions. Remember why you’re here. More importantly, remember how you got here. Otherwise, all the energy in the world won’t make a lick of difference.

Fittingly, experience is separating the men from the boys in Round 3.