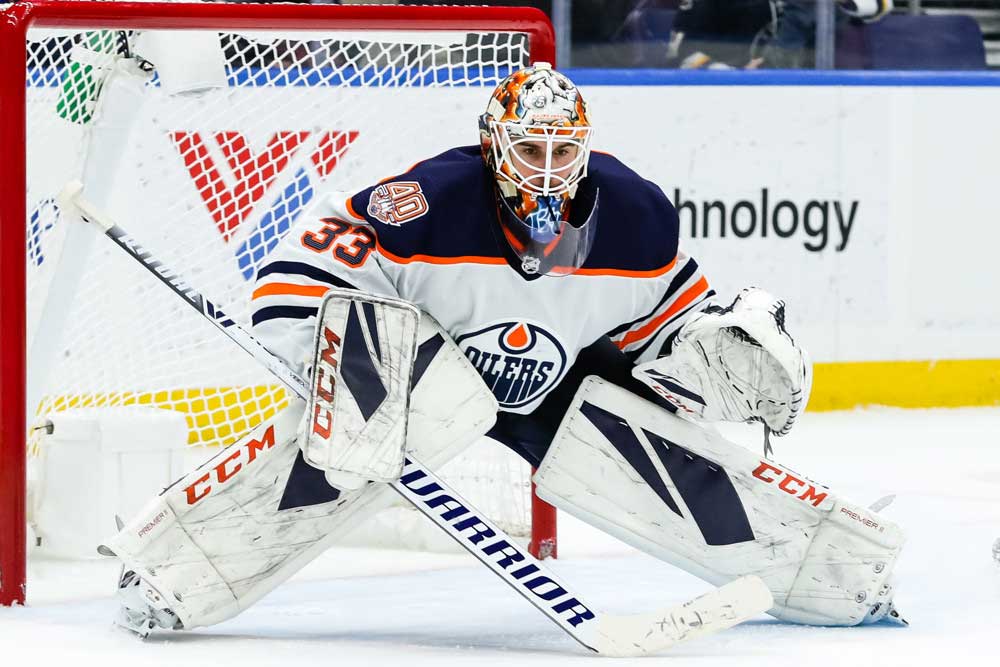 At least one NHL trade rumor has become true as the Edmonton Oilers shipped Cam Talbot over to the Philadelphia Flyers for fellow netminder Anthony Stolarz on Feb. 16th. The 31-year-old Talbot is scheduled to become an unrestricted free agent this summer while the 25-year-old Stolarz will be a restricted free agent. Edmonton also freed up close to $3.4 million in salary cap space with the trade and will soon reactivate defenseman Andrej Sekera once he’s recovered from injury.

As soon as Talbot sets foot in the crease for the Flyers during an NHL game this season the club will set a new league record for using eight goaltenders in a single campaign.

TRADE ALERT: The #Flyers have acquired goaltender Cam Talbot from the Edmonton Oilers in exchange for goaltender Anthony Stolarz. https://t.co/mzPANUwVSG

It’s believed Talbot was acquired to mentor young Flyers’ goalie Carter Hart as the rookie and veteran know each other well and worked on their games together last summer in Edmonton. The writing was more or less on the wall for Talbot though after the Oilers recently signed Mikko Koskinen to a three-year contract worth $4.5 million a season. It should be noted the Oilers then fired former general manager Peter Chiarelli soon after Koskinen inked the deal.

Talbot has played in 31 contests with Edmonton this season with a 10-15-3 record, an 89.3 save percentage and a goals-against average of 3.36. He started his big league career in the Big Apple with the New York Rangers and was traded for a trio of draft picks two years later in 2015. Talbot’s NHL career record is better than this year’s numbers would have you believe as he’s gone 137-110-24 in 284 outings with a 2.59 GAA and save percentage of 91.5.

He may be in for a shock in Philadelphia though as Hart has emerged as the team’s number one and Talbot is used to being a busy bee. He played 73 games in 2016/17 and 67 in 2017/18 to lead the league in that department. This is a last-gasp move by the Flyers though as they were eight points out of a playoff spot at the time of the trade. It’s now or never for the team, but Hart’s expected to get the lion’s share of the starts, at least until they drop out of the race.

As for Stolarz, he appeared in 12 games with the Flyers this season and looked like he had a shot at being a dependable backup to Hart. He owned a 4-3-3 mark along with a 90.2 save percentage and a 3.33 GAA. He was drafted by Philly in the second round with the 45th overall pick in 2012. Stolarz has played just 19 times with the Flyers with a career record of 6-4-4 along with a 2.86 GAA and 91.1 save percentage.

With the Oilers losing the night before the trade it meant they were seven points out of the playoffs. They may fold the tent now or try changing their luck by giving Stolarz a string of starts. It doesn’t appear they’re about to bail on the season yet though as interim general manager Keith Gretzky made another move on Feb. 16th.

The Great One’s brother sent Ryan Spooner to the Vancouver Canucks for fellow pivot Sam Gagner. The 29-year-old Gagner spent seven seasons in Edmonton after the team drafted him in 2007 with the sixth overall pick. He’s been playing in the American Hockey League this season with the Toronto Marlies and has notched 12 goals and 25 assists in 43 games and had three points in seven contests with the Canucks. Gagner has piled up 153 goals and 436 points in 777 NHL regular-season games.

TRADE 🔄 The #Oilers have acquired forward Sam Gagner from the @Canucks in exchange for forward Ryan Spooner. pic.twitter.com/4ZS4z75lh0

The 27-year-old Spooner started the campaign with the Rangers before the Oilers dealt for him and he’s also spent some time in the AHL with the Bakersfield Condors. He had two points in 16 contests with New York, three in 25 outings with the Oilers and six points in his seven appearances in Bakersfield. He was drafted in 2010 with the 45th overall pick by the Boston Bruins and has racked up 163 points in his 314 NHL encounters.

Flyers’ fans may be questioning the Stolarz for Talbot move since the team has given up a 6-foot-6-inch goalie who is six years younger and a restricted free agent for a pending unrestricted free agent. If Talbot decides to test the free agency waters in the summer then he becomes a rental and fans will have the right to be upset. In addition, Hart has been playing just fine in Philly, so it’s unclear why management felt he needed mentoring.

Stolarz has showed promise with the Flyers and let’s not forget this is the same team that gave up on Sergei Bobrovsky several years ago. All Bobrovsky has done since leaving the City of Brotherly Love is win a pair of Vezina Trophies. Will history repeat itself with their latest trade?

On the other hand, Stolarz has had injury problems in the past and Talbot could end up signing a new deal in Philadelphia. He’s not over the hill at 31 and can handle as much work that’s thrown his way. If Hart should happen to falter down the stretch or suffer from the dreaded sophomore jinx next season then the trade doesn’t look too bad.

The Flyers also have several goalies in their system so they may not miss Stolarz at all. However, they must have felt he had a future ahead of him as they protected him in the 2017 Expansion Draft when the Vegas Golden Knights joined the league. And let’s not forget veterans Brian Elliot and Michal Neuvirth are still under contract until the end of the season and taking up salary cap space.

As with the majority of NHL trades though, we won’t know who’s going to win this deal until sometime in the future. However, if Talbot signs elsewhere as a free agent in July then the Flyers certainly come in second place.

The Oilers had nothing to lose really as they were resigned to the fact they’d lose Talbot in the offseason. They now have a goalie in Stolarz who may actually be better than Koskinen, but critics will may point out that neither of them are legitimate NHL starters.