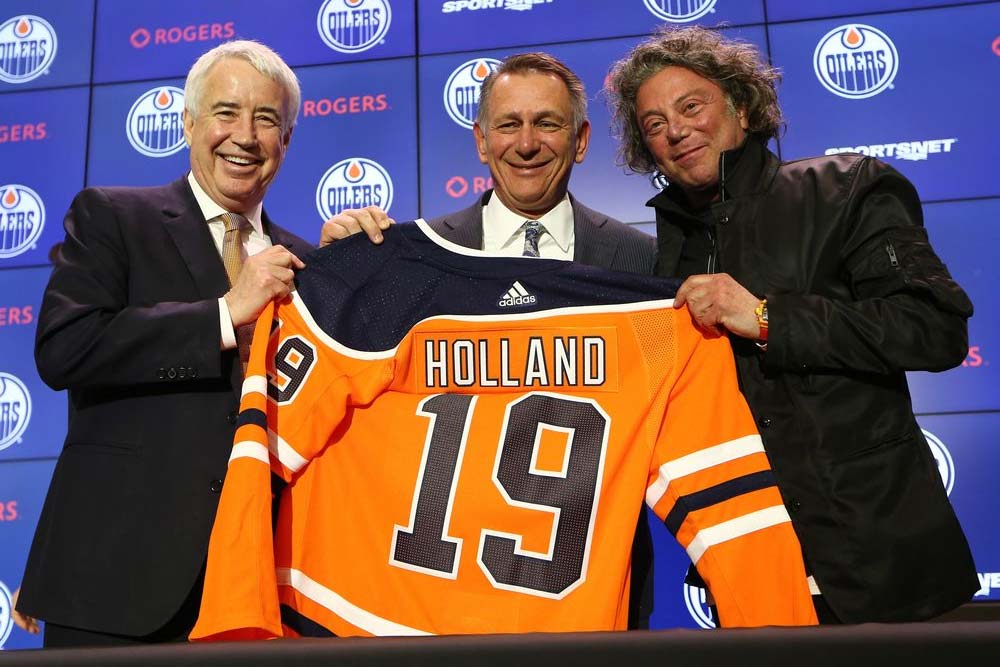 After missing the playoffs in 12 of the last 13 NHL seasons the Edmonton Oilers need to get back on track and hope to do so with their latest front office move. The Oilers announced on May 7th that they have hired Ken Holland as their new general manager and president of hockey operations to take over from interim GM Keith Gretzky.

Gretzky took over the interim post in January when Peter Chiarelli, who was in his fourth season, was fired from the job. Chiarelli managed to reach the playoffs in 2016/17 with the Oilers getting ousted in the second round by the Anaheim Ducks in seven games.

This won’t be the Oilers last move though as Holland, a former pro goaltender, will now have to hire a new head coach since Ken Hitchcock won’t be back behind the bench. The next coach will be Edmonton’s eighth since 2009 while Holland is the franchise’s 10th GM.

The Oilers, despite boasting Connor McDavid and Leon Draisaitl in the lineup, have reached the postseason just once since going to the Stanley Cup final in 2005/06 where they were beaten by the Carolina Hurricanes.

Holland could possibly be the man to turn the ailing Edmonton franchise around as he won four Stanley Cups and President’s Trophies with the Detroit Red Wings and at one point saw the Motown club make the playoffs for 25 consecutive seasons while in their front office. While he was GM, Detroit made the playoffs 22 times including his first 19 years in charge and won three Stanley Cups.

If you’re asking the 63-year-old Holland what have you done for me lately though; the Red Wings haven’t reached the postseason for the last three years and when they did make it the three previous seasons they were knocked out in the first round. He’ll now reportedly make $5 million a year in Edmonton for the next five seasons.

Holland’s GM tenure in Detroit was on shaky ground ever since the Red Wings hired their former star player Steve Yzerman as new general manager in April to replace Holland who was then handed the senior vice president role. Yzerman then hired Pat Verbeek as his assistant GM after working with him in Tampa Bay. Holland originally said he was looking forward to remaining in Detroit and working with Yzerman, but apparently changed his mind recently even though he had just signed a multi-season contract extension on April 19th.

Holland, who was born in Vernon, British Columbia, began his Detroit career 36 years ago as a scout in Western Canada. He later served as assistant general manager and goaltending coach before taking over as GM in the summer of 1997. He also led the Red Wings to the Central Division title 10 times, the Conference title on five occasions and won 893 regular season games along with 119 playoff contests.

While in Detroit, Holland made dozens of trades with some of them working out and others not faring too well. He traded useful forward Tomas Tatar to the Vegas Golden Knights in February, 2018, but did manage to receive a first, second and third-round pick in return. He also dealt goaltender Petr Mrazek to the Philadelphia Flyers last year for a conditional third and fourth round pick.

Mrazek has since gone on to become a valuable piece of the puzzle for the Carolina Hurricanes as they prepare to meet the Boston Bruins in the Eastern Conference Final. Meanwhile, the Red Wings will soon need a replacement in net for the ageing Jimmy Howard.

Holland traded for a few big-name players over the years but also built a strong squad through the draft and with some shrewd free agency signing. However, he did inherit a pretty good team when he took over as GM and that arguably isn’t the case in Edmonton. His job will now be to turn the roster into a winner and build around its core of McDavid and Draisaitl. Holland may also start looking for a solid starting goaltender.

Some Detroit fans believe their former GM held on to some of his veteran players for too long and should have started the current rebuild a couple of years earlier. That’s now Yzerman’s situation to rectify and possibly one of the reasons he was brought in to replace Holland.

The Oilers’ hiring of Holland wasn’t the only recent GM move as the Vegas Golden Knights somewhat quietly also announced a new body in the position just a few days earlier. George McPhee stepped down from the role and promoted 58-year-old assistant GM Kelly McCrimmon to take over as of September 1st. McPhee remains as the team’s president of hockey operations though.

McCrimmon, who hails from Plenty, Saskatchewan, was also in the running for the Oilers’ job and the Seattle expansion franchise also expressed interest in his services. McPhee then figured the best way to keep McCrimmon in Vegas was to promote him. It was a big week for the new Vegas GM as he was also inducted into the Manitoba Hockey Hall of Fame.