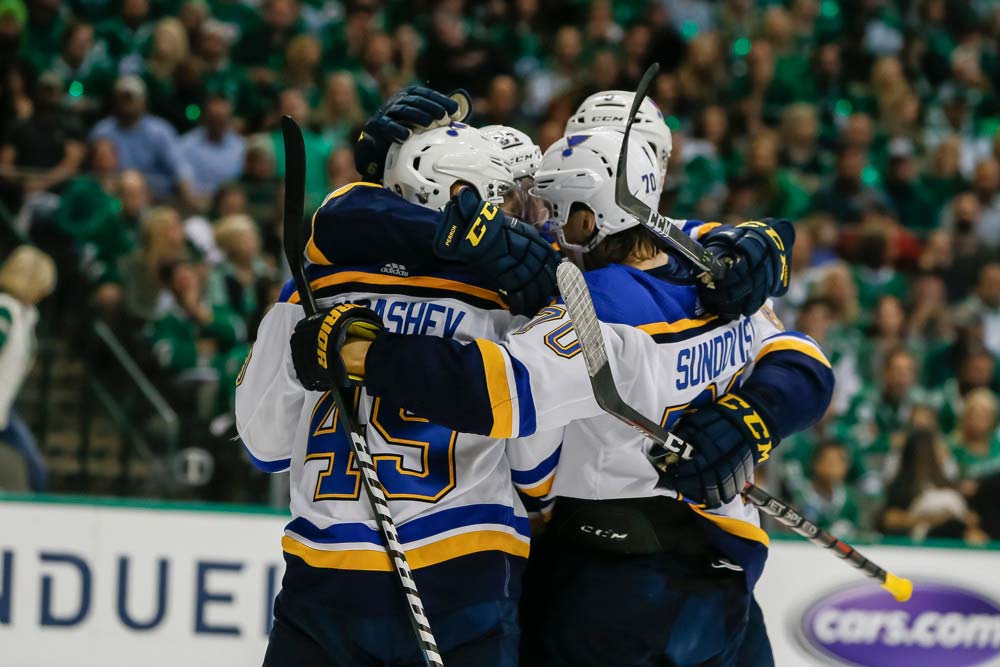 For both the Dallas Stars and St. Louis Blues, this second-round series has been too close for comfort. Each team has won three games. Each team has scored 16 goals.

Granted, St. Louis holds the edge in possession, but that boils down to differing philosophies: Craig Berube wants his troops to swarm the opposition in all three zones, whereas Jim Montgomery is more interested in controlling the trenches. That’s why the Blues own 51.9% of the shot attempts (3rd) but only 44.2% of the high-danger chances (7th) at 5-on-5 in the conference semifinals. Through six contests, these approaches have yielded identical results where it matters most. Every time one club gathers momentum, it’s immediately snatched away by its counterpart.

Since these squads are so evenly matched, each will surely lean on its cutting edge in Game 7. From Dallas’ standpoint, suffocating team defense and terrific goaltending allowed it to produce the seventh-highest points percentage following the trade deadline. That stinginess paved the way for a playoff berth and represents the key to advancing past the Blues. Its odds aren’t nearly as promising in a high-scoring affair.

This places Ben Bishop under the microscope. The Vezina Trophy finalist and likely winner is the main reason Dallas mustered a strong postseason push, as he put up extraordinary figures from February onward: 1.24 GAA, 95.9 SV%. This carried over into the first round against the Nashville Predators (1.90 GAA, 94.5 SV%), but he’s struggled to replicate that form since then. His performance in the second round (2.78 GAA, 90.9 SV%) has slipped to such a degree that he’s hurt his club as much as he’s helped it.

To the Blues’ credit, they’ve worked hard to frustrate Bishop with traffic and an attack that can generate chances on the rush as well as the cycle. However, the veteran is accountable for his own play. The 6’7” netminder is visibly shaky in his crease, often struggling to track the puck through bodies despite his massive size. It looks like he’s simply guessing at times. There have also been instances where he had a clear sightline and Blues shooters snuck their bids through him anyway. When he’s dialed in, these shots are repelled with the greatest of ease.

At present, he looks unsure of himself between the pipes — and that tentativeness can be contagious. Controlling 55.8% of the high-danger opportunities but just 45.4% of the goals off those chances is bound to feel discouraging. He’ll need to find his confidence in short order because the Blues will host Game 7 on the heels of a huge victory.

Of course, the team must also tighten up in front of him. In Game 6 alone, the Stars handed the Blues three goals on a silver platter.

Alex Pietrangelo opened the scoring just one minute into the contest with a screened wrister from the point. St. Louis was buzzing in the offensive zone before that marker, but when you consider Dallas’s scheme, the team appeared to be in decent shape. However, when the puck made its way to Pietrangelo at the blue line, he was allowed to drift to the middle of the ice and fire a shot from a more advantageous angle. Miro Heiskanen failed to get in front of the bid and Mattias Janmark did absolutely nothing to prevent Brayden Schenn from hindering Bishop’s vision.

The #STLBlues get the party started in Dallas with Alex Pietrangelo’s shot from the point, just 63 seconds into the game. 🔥#StanleyCup pic.twitter.com/dobFOmCgk5

That set the tone for an afternoon of fundamental errors.

David Perron’s 2-1 goal showcased some awful defense by John Klingberg. While his positioning was solid, he could neither deflect the puck away nor tie up Perron’s stick. You simply can’t fall short on both fronts in that situation. He did, though, and the Blues consequently stumbled upon the game-winner on an otherwise routine play.

Finally, captain Jamie Benn gifted St. Louis the 4-1 dagger with a turnover at the offensive blue line. He was obviously trying to make something happen with his team down by two, but the moment he lost possession, he should have been in front of Ryan O’Reilly and stopped him from dashing up the ice — even if that meant taking a penalty. Conceding a breakaway there was completely unacceptable and a microcosm of Dallas’ poor attention to detail throughout the game.

Sure, you could argue that Jaden Schwartz’s goal shouldn’t have counted…but the Blues won by three.

The Stars weren’t the victims of one horrendous, game-altering call. They were far too sloppy and paid for it. Coughing the puck up at the blue line, not boxing out your man, having inside leverage and still losing net-front battles. These are junior-level mistakes you can’t afford to make when your game plan is built on securing home base and then launching a counterattack. You can’t skip the first and foremost step.

It won’t get any easier in Game 7. Roope Hintz (8 points in 12 games), who’s chosen the perfect time to emerge as a responsible top-six forward, was wearing a boot on his left foot after blocking a shot on Sunday. If the 22-year-old can even suit up for Dallas, he’ll likely be missing the jump that has fueled his breakout.

There’s also home ice advantage to consider. St. Louis will boast last change and will surely target the Stars’ lesser defenders. Ben Lovejoy (39.3 CF%, 42.4 SCF%, 33.3 HDCF%) and Taylor Fedun (44.8 CF%, 44.4 SCF%, 25.0 HDCF%) have proven incapable of keeping their heads above water throughout the series, conceding a massive share of the shot attempts and scoring chances from dangerous areas. The Blues’ heavy forecheck has given them fits and there will be nowhere for them to hide on Tuesday night.

Naturally, this places even more pressure on the team’s Big Three on D. Klingberg, Heiskanen and Esa Lindell have largely been superb this spring, and they’ll need to bring their best in Game 7 knowing that there is no help to be found lower on the depth chart. The forwards must chip in as well. That means allowing Bishop to see the puck, tying up sticks in tight and only pushing the pace once a defensive stand has been completed.

With that said, goaltending is the great equalizer in any series. Bishop has the opportunity to redeem himself and step up when the chips are down. He has to fight to find pucks through traffic and can’t allow shots to go through him. He has to force the Blues to earn their goals.

It’s time for the Stars to get back to basics. If they don’t, the early storm they hope to weather may well blow them straight out of the playoffs.