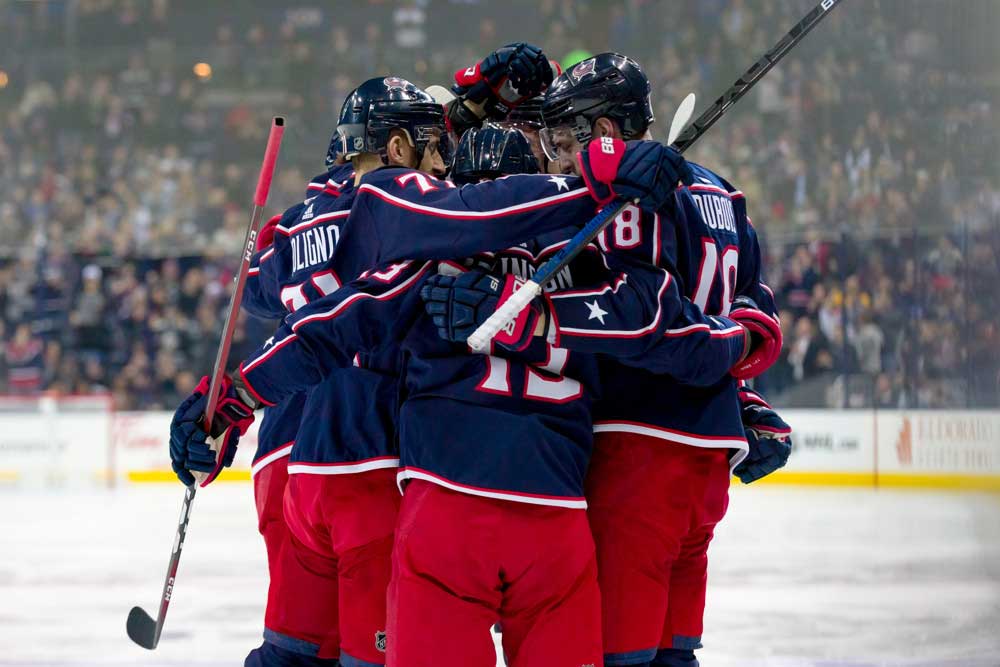 Due to their perception as a blue-collar group, the Columbus Blue Jackets have never been defined by high-octane offense. Head coach John Tortorella’s defensive reputation probably doesn’t help. That view might change as the 2018-19 season unfolds, though. They are indeed scrappy and tough to play against, but their success so far has largely stemmed from their attack.

Columbus leads the Metropolitan Division with a 28-15-3 record, and its ninth-ranked offense has clearly done more of the heavy lifting than its 20th-ranked defense.

With that said, this isn’t a deep and balanced forward corps. Beyond the top line of Artemi Panarin (52 points in 44 games), Cam Atkinson (48 points in 45 games) and Pierre-Luc Dubois (42 points in 46 games), only Nick Foligno (23 points in 41 games) is on pace for 40 points. The first unit shoulders an incredibly heavy burden, and more often than not, it delivers the goods.

Panarin, Atkinson and Dubois have built upon last year’s chemistry and evolved into one of the finest trios in the world. Compared to Boston, Colorado and Tampa Bay’s top lines, they’ve flown under the radar despite stellar production.

Dubois, who is the least talked-about of the three, is the biggest reason for his line’s rise up the ranks. He isn’t the best player on his unit — that’s Panarin — but his immense progress as a three-zone pivot has allowed the group to take the next step. Much of that is the result of physical maturity.

While the third overall pick in 2016 is still just 20 years old, he’s already made strides to fill out his frame (6’3”, 207 lbs) and grasp the advantages that it offers him. He’s stronger on the puck and more aware of how to use leverage in the corners to gain an edge on the opposition. “I think the fact that when I was a kid, I was small, I had to use my brain to protect the puck instead of just using my body because I was bigger than everyone,” he told BlueJackets.com in early January. “Now I can combine both.”

Taller forwards require additional seasoning, but the fact that Dubois is adjusting so quickly is promising. His ability to win battles in the trenches extends possessions and affords Panarin and Atkinson more touches in the offensive zone. It also bolsters his line’s potency: They can score off the rush or play the long game by wearing out defenders on the cycle.

That versatility obviously makes life harder on opponents. They can’t over-commit to a single defensive tactic because the line can hurt you in a number of ways.

The purest scorer on the trio is Atkinson. He’s posted 27 goals to this point, and even though he’s just 5’8” and 179 pounds, he remains a threat in tight or from the circles. He isn’t afraid to get his nose dirty and battle in the congested areas of the ice, as his hustle and hand-eye coordination have yielded quite a few deflection tallies.

Though the 29-year-old is an all-around solid contributor, his best asset is perhaps how willing and ready he is to fire pucks on net. He ranks ninth in the entire league in shots, and among the top 10 in that category, he sits second behind Alex Ovechkin in conversion rate (15.3%). As a result, he acts as the perfect foil for an elite playmaker like Panarin.

Regardless of the situation, Atkinson keeps his stance open so that he can release a shot in the blink of an eye if the puck finds itself on his stick.

With Panarin as his linemate, that scenario occurs frequently. It’s no stretch to claim the Russian dynamo is the straw that stirs the drink. His vision, patience and passing touch are remarkable, as he regularly carves out passing lanes that seemingly no one else can detect. His knack for manipulating and deceiving defenses is special.

Better still, he isn’t the sort of stubborn playmaker who refuses to shoot unless the chance is too glaring to pass up. He merely picks the best option available, and if that requires a shot, he’s more than capable of beating goaltenders on his own.

The 27-year-old is at his most dangerous when he’s allowed to pick up speed in the neutral zone. If teammates can hit him with a pass in full stride, he can completely fluster defenders by quickly getting a step outside or pulling up and waiting for a more optimal play to materialize. It’s as though shifts take place in slow motion for him, as he just bides his time until he determines the best course of action.

Panarin has been an absolute stud since his NHL debut (285 points in 287 career games), and he’s maintained his world-class performance alongside a steady partner in Atkinson and a breakout star in Dubois.

This trio doesn’t rely on the man advantage to produce either. Among players who’ve seen at least 300 minutes at even strength this season, Panarin and Atkinson rank top 10 in points/60, whereas Dubois is 27th. Since most of the game takes place at 5-on-5, this level of offense is a huge reason why Columbus has enjoyed such a strong first half.

However, scoring goals isn’t all that valuable when you concede just as many. High-event players are definitely exciting, but they aren’t necessarily the most effective.

The Blue Jackets’ top line combines game-breaking skill with relatively sound two-way hockey. The team controls just 49.8% of the shot attempts (17th) at even strength, but it claims 51.2% of the scoring chances (11th) and 53.0% of the goals scored (9th). In other words, Columbus makes the most of its opportunities. Panarin, Atkinson and Dubois share that approach, but with even better results across the board: 54.6 CF%, 57.4 SCF%, 62.9 GF%.

Moreover, this unit is especially important because the roster is otherwise rife with disappointments up front.

Alexander Wennberg, who rode great power-play production to a 59-point campaign in 2016-17, has just 19 points in 46 games. Riley Nash, who was signed after a 41-point season in Boston a year ago, has managed a whopping five points in 45 games. 23-year-old winger Oliver Bjorkstrand put up 40 points in 2017-18, but he’s on pace for 26 this season. 2014 first-round pick Sonny Milano has yet to prove his worth as an everyday pro. Dating back to the start of last season, veteran Brandon Dubinsky has 26 points in 94 games.

There just isn’t a lot of forward support on hand. Panarin, Atkinson and Dubois appear to relish this responsibility, though, regularly skating circles around their opponents and tilting the ice on their way to victory.

This isn’t a Blue Jackets squad that depends solely on its defense and goaltending — one could argue those are the team’s flaws at the moment. They’re thriving because they’re scoring 3.30 goals per game, and that is primarily the result of a deadly and underrated first line.

Now, the burning question involves the group’s long-term outlook. Panarin is a pending unrestricted free agent, and the elephant in the room suggests he may prefer playing in a sexier market. There’s no denying New York’s allure, so general manager Jarmo Kekalainen will have his work cut out for him as he tries to convince his star to re-sign. Speculate as we might, this situation should remain up in the air until the summer.

At least for this season, Columbus finally has the firepower to go tit for tat with the heavy hitters in the East. Given the chemistry on display, a deep postseason run may even tempt Panarin to stay put.