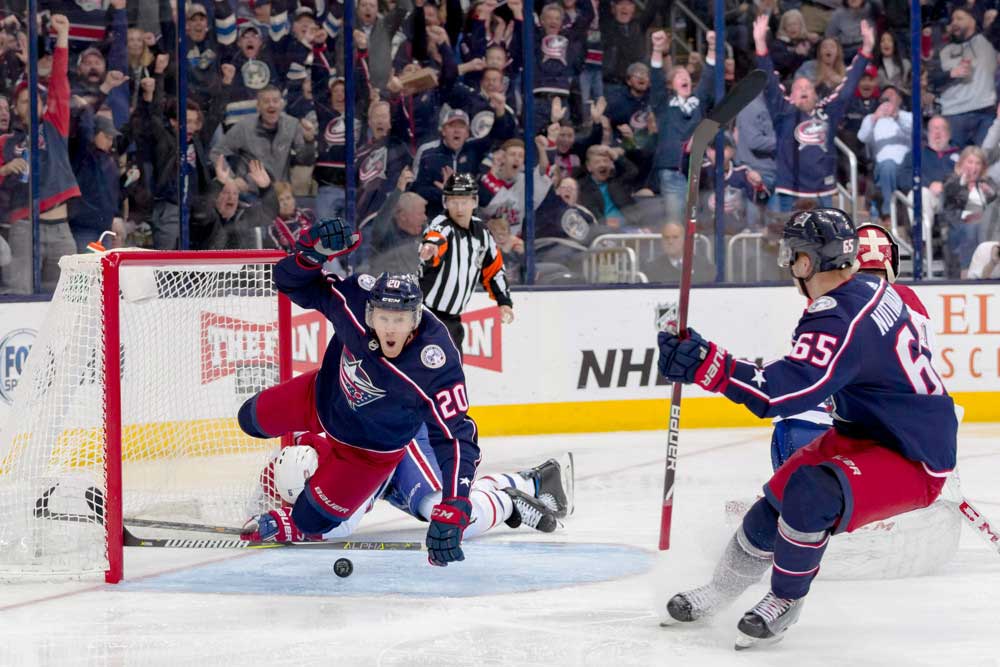 After pulling off major deals for Matt Duchene (67 points in 68 games) and Ryan Dzingel (53 points in 73 games) at the trade deadline, Columbus Blue Jackets general manager Jarmo Kekalainen probably envisioned a different scenario for his team.

On paper, that infusion of firepower should have represented just what the doctor ordered for a solid if top-heavy club up front. In reality, they’ve gone 8-7-1 since introducing the two newcomers and hold the second wild card spot in the Eastern Conference. That’s not horrible by any stretch, but many believed they would make up more ground on the front-runners.

While no one should place the Blue Jackets in the same tier as the Tampa Bay Lightning or Washington Capitals, they’ve managed to shake off a slow post-deadline start with three straight one-sided wins. On Thursday night, it took them half a period to even register a shot against the Montreal Canadiens — the very team they were chasing in the playoff race. That harmless bid was met with a Bronx cheer from the home crowd. Many teams in that situation would have folded, but Columbus came out for the second period hungry and revitalized. In a stunning and timely turnaround, the Blue Jackets beat Carey Price five times over the final two frames to prevail 6-2.

Though the chemistry still isn’t quite there for the revamped Blue Jackets, they refuse to go out with a whimper. Much like their GM in late February, they’re scratching, clawing and fighting to stay alive.

No player has personified this scrappiness better than goaltender Sergei Bobrovsky (2.61 GAA, 91.2 SV%). The 30-year-old isn’t enjoying his finest campaign, but he’s managed to battle a tide of negative momentum and right the ship when it matters most. Dating back to late February, he’s posted a sparkling 93.4 SV% and five shutouts. Most netminders would be thrilled with that total over an entire year. Bobrovsky has hit that mark over the home stretch alone.

His resilience is also reflected in his style between the pipes. As opposed to Price, who calmly and quietly swallows shots when he’s on his game, Bobrovsky is a somewhat frantic and hyper-athletic goaltender who flies across the cage to keep pucks out. It isn’t textbook, but it’s hard to imagine Columbus has any complaints at the moment.

Bobrovsky’s superb end of season is particularly notable because he’s a pending unrestricted free agent. Amid a largely difficult campaign, he had every reason to check out for the year. Instead, he’s rallied to give his club a chance to clinch a playoff berth.

How could his teammates not respond in kind and elevate their play as well?

To be fair, that hasn’t occurred on the offensive end until recently. Duchene took an eternity to find his groove in Ottawa (5 points in his first 21 games), and he’s yet to adapt to his new environment in Columbus (9 points in 18 games). Once again, he’s passing the eye test with his blend of pace, creativity and edge work, but that finishing touch has proven elusive.

Meanwhile, Dzingel was perhaps a bit overrated heading into the deadline and has done little to shake that designation with nine points in 16 contests. His straight-line speed and ability on the rush are undeniable, but as the games get tighter, he must become more effective at puck management and on the cycle. Among Blue Jackets forwards, he ranks second-last in CF% (46.0), fourth-last SCF% (46.4) and dead last in HDCF% (45.8). In other words, Columbus controls very little of the play during his 5-on-5 shifts.

Even the top dogs who were there before the reinforcements arrived are struggling. Artemi Panarin (79 points in 74 games), another pending UFA, doesn’t look quite right. He’s carried the first line for most of the year but has a mere six points in his last 12 games. His passes have been surprisingly inaccurate and he’s been forcing the issue rather than displaying the patience and vision that usually define his game.

Oddly enough, it’s the forgotten veterans who have led the charge. Captain Nick Foligno (31 points in 68 games) and Brandon Dubinsky (14 points in 56 games) may not be piling up points, but they’ve been setting the tone with their competitive nature. That was particularly true on Thursday night, as Foligno, Dubinsky and Riley Nash (11 points in 73 games) were the first trio to dig their heels in and impose their will on the Habs. They simply hustled their way back into the contest by getting to pucks first and forcing Montreal to earn every inch of ice.

That’s a significant development for Dubinsky, who seemed lost without a paddle only a few weeks ago. If he can maintain that level of fire and grit, it’ll go a long way toward helping a Blue Jackets club that — while more talented than ever — still wins on the back of its work ethic. That won’t change under Tortorella, so it’s fitting that one of his most dependable forwards in New York is raising his game at just the right moment.

The elder statesmen’s intensity has rubbed off on power forward Josh Anderson (45 points in 77 games) too. The 24-year-old has had a breakout year overall, but he’s an absolute monster in chippy affairs when he can deploy his wheels and 6’3”, 221-pound frame. He demonstrated that against the Habs, hunting down Victor Mete and crunching him along the boards, which created a skating lane for Riley Nash’s 4-2 marker. Anderson looks built for playoff hockey and is doing his part to bring the Blue Jackets there with 10 points in his last 10 outings.

Ultimately, the Blue Jackets aren’t dominating games (49.3 CF%, 2.69 GPG since the trade deadline), but they’re hanging around long enough to scrape out victories by hook or by crook. Bobrovsky has regained his Vezina Trophy form, the defense is clamping down on opponents and the forwards are compensating for mediocre offense with gritty all-around play and opportunistic scoring. Hell, Oliver Bjorkstrand (30 points in 72 games) has five goals in the past five games.

Though it hasn’t always been pretty, at this point in the season, how you win isn’t nearly as important as simply winning.