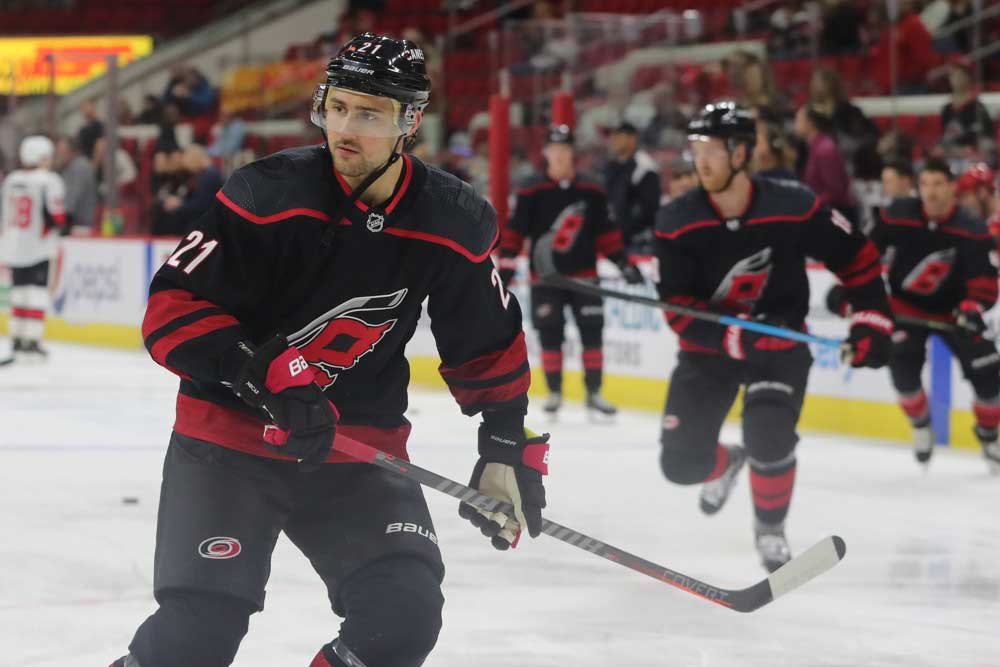 When a team isn’t quite meeting expectations, panic sometimes takes hold and general managers pull the trigger on deals they wouldn’t consider otherwise. There’s a belief that merely shaking things up can right the ship. However, such moves often gloss over fundamental issues that won’t be solved with a single transaction.

The 22-20-5 Carolina Hurricanes were surely hoping for a better first half to the 2018-19 season, but their decision to trade center Victor Rask to the Minnesota Wild for winger Nino Niederreiter doesn’t boil down to shuffling the deck for the sake of it. They actually reaffirmed their belief in head coach Rod Brind’Amour’s system: Rask was a puck-possession drain, whereas Niederreiter is an analytics darling who has consistently titled the ice for his club.

Since Carolina controls 55.1% of the shot attempts (2nd) and 55.0% of the scoring chances (3rd) at 5-on-5 but ranks just 27th offensively, perhaps the team should have focused its efforts on landing a pure goal scorer.

Nevertheless, general manager Don Waddell proved that the franchise is committed to its process. That in and of itself could serve as a powerful message to the locker room.

After a serious hand injury ended his — already disappointing — 2017-18 season, Rask (6 points in 26 games) hasn’t looked like the same player. He appears tentative and afraid to engage in the action. Not only is his production way down, he doesn’t truly suit Carolina’s approach to the game (46.1 CF%, 43.4 SCF%). His teammates have outperformed him in shot and scoring chance shares for years, and these shortcomings are impossible to overlook now that his 48- and 45-point seasons are in the rear-view mirror.

Among the 513 NHL forwards who have played at least 200 even-strength minutes in 2018-19, Rask’s relative SCF% ranks 501st. He undermined much of what the Hurricanes aim to accomplish.

As an all-hands-on-deck squad, Carolina needs each player to win their battles in the trenches in order to win the war. Every able body must contribute. Rask wasn’t in the foxhole with his teammates, and he could no longer produce enough offense to compensate for it.

On the other side of the equation, Niederreiter (23 points in 47 games, 53.1 CF%, 54.7 SCF%) fits like a glove because he has always done an admirable job of controlling play. Dating back to his second pro campaign, his team-relative metrics have been nothing short of sparkling. While he’s no clinical finisher, his skill set should feel right at home in this new environment.

His frame (6’2”, 218 lbs) isn’t that different from Rask’s (6’2”, 200 lbs), but Niederreiter is willing to use it. Now, he isn’t a bruiser or a wrecking ball by any stretch. However, he’s as strong as an ox and can fend off most defenders in the corners. By combining good hockey sense with a nose for the puck, he’s constantly involved in the play. That alone constitutes an upgrade.

The 26-year-old’s slower tempo and methodical style should complement Carolina’s game and perhaps lead to longer sequences in the offensive zone. The team fires the puck on net like few others in the league, but it doesn’t really chain together waves of attack.

When your goal is to overwhelm the opposition with volume, you’ll typically find more success with sustained bursts than with a barrage of one-and-dones.

The key for Brind’Amour will be determining where to slot Niederreiter in his lineup. In his first game as a Hurricane, the Swiss winger played with captain Justin Williams and Greg McKegg. The trio put forth a solid outing despite the team as whole dropping the ball against the lowly Ottawa Senators.

With that said, it might be worth giving him a look with higher-end forwards to maximize his impact. He could provide them with an element of puck protection and sturdiness, while the change could also bring his raw talent to the fore. The fifth overall pick in 2010 has seemingly always had more to give offensively, and maybe he could fulfill that potential alongside rookie Andrei Svechnikov or even Sebastian Aho on the top unit.

In a different system and with different linemates, the newcomer could very well rediscover his scoring touch (57 points in 2016-17).

If he tops out as a 40-point, puck-possession forward, that’s still a nice acquisition for a team with playoff aspirations. Niederreiter can control the flow of the game better than most wingers, and that’s nothing to scoff at.

But was that the franchise’s primary concern? Will the move necessarily translate into more wins?

We noted not too long ago that Carolina desperately needs more scoring. Aho is a dynamic young star (51 points in 47 games), but he can’t carry an offense on his own. While claiming the majority of the puck is wonderful, it isn’t meaningful if you can’t put it in the net as often as your opponents can. Judging by the team’s 25th-ranked GF% and position just outside the playoff picture, it’s still struggling in that department.

Turning the page on Rask and introducing Niederreiter into the mix certainly represents a step up in absolute value. However, it also dances around the main issue rather than tackling it head on.

The Hurricanes’ defense isn’t great, but it’s serviceable (13th). Their goaltending is questionable at times (19th in OISV%), but it can do the trick in the new NHL. Their core weakness has not been addressed, though, and it must be in order for them to make a viable playoff push. Granted, Waddell may have a few more moves up his sleeve leading up to the trade deadline. Until then, banking on possession to swing the odds in Carolina’s favor is a risky proposition.

For now — and for better or worse — Carolina has dug its heels in and solidified its identity.