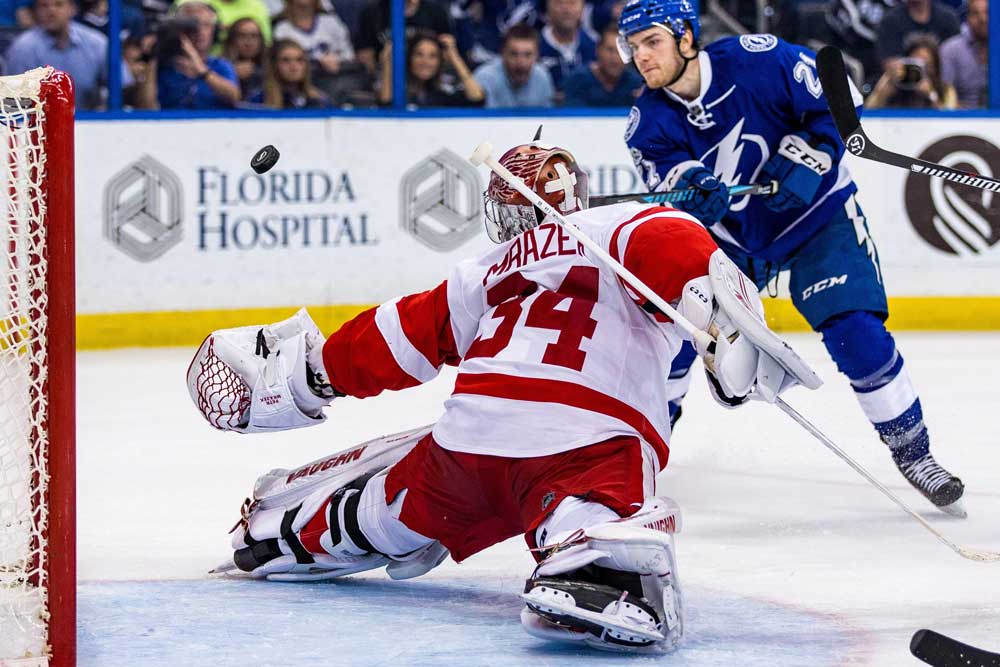 The Tampa Bay Lightning lineup features its fair share of star NHL players such as Steven Stamkos, Nikita Kucherov, Victor Hedman and goaltender Andrei Vasilevskiy…and we can now add center Brayden Point to that list. After toiling in the shadows as a rookie he enjoyed somewhat of a breakout year last season and has become a legitimate star this campaign.

Point buried 134 goals and 190 assists for 324 points in 252 games while playing in Moose Jaw of the Western Hockey League as a junior, but wasn’t drafted by Tampa Bay until the third round with the 79th overall pick in 2014. This was likely due to his perceived weakness in his own end and the fact he’s only 5-feet-10-inches tall and weighs just over 165 lbs.

The the native of Calgary, Alberta proved himself as one of the best young players in Canada and shone at two World Junior Championships for his homeland. The 22-year-old’s apprenticeship then lasted just nine games in the minor leagues with Syracuse of the American Hockey League where he notched two goals and four points in 2014/15.

The speedster spent the next season back in Moose Jaw though before stepping right in with the Lightning at the beginning of 2016/17. He impressed the team’s brass as a rookie with 18 goals and 40 points in 68 games while playing just over 17 minutes per night. He also improved on his defensive play and finished the year as a plus-four.

With his confidence growing, Point then netted 32 goals and 34 assists for Tampa in his second year with a plus-18 rating and saw his ice time grow to 19:37 minutes per game. He also displayed a knack for scoring clutch goals as he led both his team and the NHL with a dozen game-winners. Point remained hot during the playoffs and helped the cause by adding another seven goals and 16 points in 17 contests.

By the time the first day of winter reared its head this year, Point had already racked up 21 goals and 24 assists for 45 points, was a plus-11 and was scoring at a pace of 1.25 points per game. This could be attributed to his keen hockey sense and world-class speed and if he keeps the pace up he’s expected to reach 48 goals and 103 points by season’s end.

But even though Point still lives in the shadows of his more famous teammates they appreciate what he brings to the team.

Last season’s James Norris Trophy winner Victor Hedman told the Calgary Sun newspaper, “He is unbelievably skilled. He has great speed. His vision is tops on this team, and tops in the league. The way he’s been playing, it was just a matter of time before he started getting noticed around the league.”

Getting noticed will definitely help Point when his entry-level contract runs out at the end of this season and he should be in line for a considerable raise. If William Nylander managed to wrangle an average of $6.9 million per year out of the Toronto Maple Leafs for the next half dozen seasons then the sky could be the limit for Point when his contract negotiations begin.

Hedman added, “For us, he’s not under-rated. We know how valuable he is to us and to our team. He drives the offence, and he’s on the ice when you’re protecting a lead, as well. He’s so reliable in all parts of the game. He’s been phenomenal for us.”

The word steal is now being used to describe Point since he managed to hang around in the draft until the third round and has outplayed the majority of the 78 players chosen before him. He went into the draft as the 31st-ranked North American skater by the NHL’s Central Scouting Services even though he was such a prolific scorer in junior.

Tampa Bay’s head coach Jon Cooper realizes just how lucky his team was to pick Point up later on in the draft and praised the youngster’s defensive play as much as his offensive ability. He added that he has already proven himself to be an elite 200-foot player in the NHL at such as young age.

Point has managed to take care of his own end of the ice without sacrificing his creativity and offensive production. He’s also a pretty feisty guy for a middleweight and displays more than enough determination and drive during every shift. He seems to be fearless on the ice and that results in so many won-battles for loose pucks. In addition, his tremendous speed also makes Point an effective penalty killer and he managed to burn opposing power-plays last season with three shorthanded goals.

It’s doubtful that he’s going to grow in height anymore at this stage of his life, but if Point can somehow manage to put on a few pounds and become even physically stronger he’s going to be more than a handful for opposing defenders for years to come.