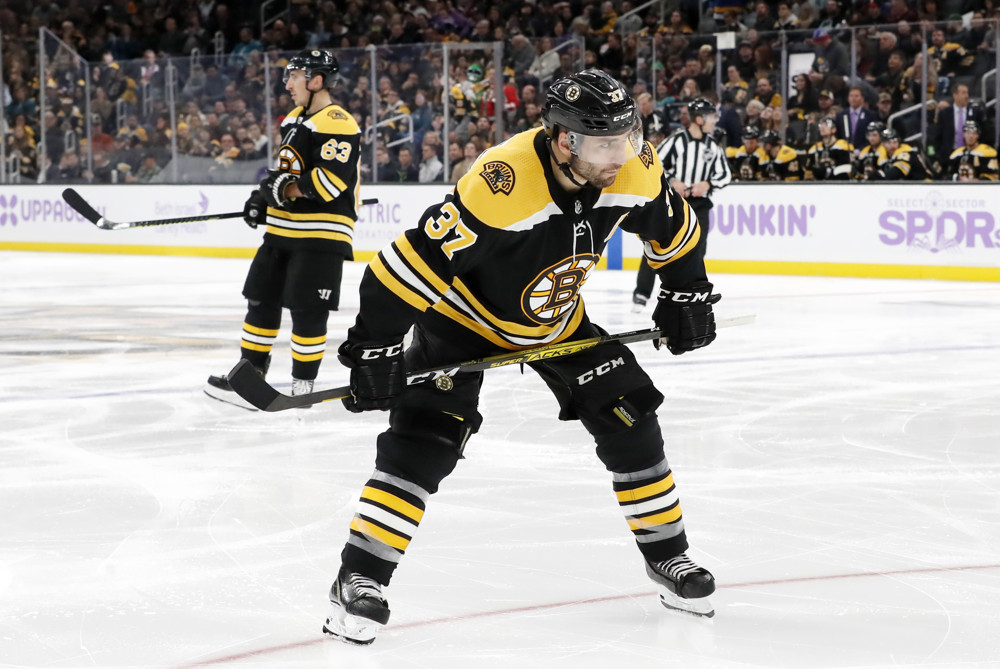 Throughout an eventful offseason around the league, the Boston Bruins largely stood pat. They bid farewell to playmaking winger Marcus Johansson in free agency while inking power forward Brett Ritchie and fringe center Par Lindholm to short-term deals. Otherwise, they merely re-signed some key RFAs to ice more or less the same roster in 2019-20.

11 games into the season, you can’t argue with the results: The 8-1-2 Bruins sit third in the NHL overall and first in points percentage.

That isn’t all that shocking when you consider Boston fell one win shy of a championship last spring. The top line’s stellar performance isn’t exactly a revelation either, as it’s done most of the heavy lifting on the offensive side over the past few years. The surprise, however, lies in the sheer weight Patrice Bergeron (11 points in 11 games), Brad Marchand (20 points in 11 games) and David Pastrnak (23 points in 11 games) are carrying at the moment. David Krejci (1 point in 5 games), who has long driven the second unit on his own, has been sidelined with an upper-body injury since October 14. No one has stepped up in his absence to provide secondary scoring. Bergeron, whose production is the least eye-popping on his trio, nevertheless has more goals than the next closest forward on the team has points. No forward beyond the first line is on pace for more than 30 points.

Despite this dire lack of depth up front, Boston has still managed to position itself as one of the Eastern Conference’s top dogs early on. It hasn’t accomplished this feat by flipping the script or even incorporating a minor wrinkle or two in its system. Instead, it’s doubled down on its identity: a truly brilliant first line, stout team defense, great goaltending and momentum-snatching special teams.

The Bruins aren’t dominating their opponents by any stretch, controlling 52.7% of the shot attempts (7th), 49.5% of the scoring chances (16th) and 48.2% of the high-danger chances (22nd) for an expected goal share of 49.6% (16th) at 5-on-5. Bergeron, Marchand and Pastrnak are steamrolling their competition, though. This line has always been ridiculously good as a three-zone unit, but it’s taken things up another notch to buoy its impotent teammates: 60.2 CF%, 58.7 SCF%, 61.5 HDCF%, 61.5 xGF%, 73.3 GF%. Those are spectacular numbers — even by their standards — that indicate they’re not just piling up points. They’re governing their shifts from start to finish in every area of the ice.

While Bergeron’s scoring rate has risen lately, the 34-year-old remains the team’s defensive conscience. He maintains spotless positioning, disrupts play after play with his active stick and doesn’t cheat for offense. This, in turn, affords Marchand the luxury of taking risks. If he detects an opportunity to jump into a passing lane or fly the defensive zone to create an odd-man rush, he seizes it knowing that Bergeron is around to hold down the fort.

Since Marchand and Bergeron kill penalties together, many are under the impression that the former is some defensive stalwart. He isn’t really. He’s decent in his end, but at heart he’s a riverboat gambler whose game sense and aggressiveness allow him to pounce on chances that others would be afraid to. That mix of styles has proven very effective. The steady perennial Selke Trophy candidate frustrates his opponents all over the ice, whereas the high-octane playmaking pest feasts on even the smallest miscue from the opposition. One breaks your will, the other breaks your back.

The scary part of this formula? We haven’t brought up the line’s scariest member yet.

Still only 23 years old, David Pastrnak is a world-class finisher going on four straight years of improvement. Due to injury issues, folks may not have realized how great he was just last season, registering 81 points in 66 games for the seventh-highest points-per-game mark in the league. Through 11 games this year, he boasts the highest point total (23), goal total (11) and PPG (2.09). Dating back to the start of 2018-19, no player has scored goals at a higher rate. Better yet, he’s scoring more and more from high-percentage areas, which translates to more sustainable output. Have we mentioned that he’s 23 years old? There’s no telling what this kid’s ceiling is.

At present, he’s a terrifying and versatile weapon. He’s equally adept at finding the back of the net on rushes and by slipping into quiet areas to unload a vicious one-timer. Pastrnak rarely stands still or overhandles the puck, continually moving his feet and working with his linemates to open up seams.

That fluidity, creativity and chemistry define Boston’s second-ranked power play as well. It’s converting on 32.4% of its opportunities because the players thrive within their respective roles. Bergeron does the grunt work and flares out for one-timers in the high slot, Marchand is the rover who’s constantly on the prowl for a weakness to exploit, Pastrnak is the ever-ready trigger, Jake DeBrusk (4 points in 11 games) is a serviceable net-front presence and Torey Krug (8 points in 11 games) is a smart point man who can filter shots through traffic. In short, they distribute the puck and pick their spots incredibly well.

All in all, the Bruins’ stars take a startlingly direct approach to generating offense. There’s skill and finesse, but it’s all deployed to get from point A to B as quickly as possible. As soon as they can, they go for the jugular. The speed at which they can transition from defense to offense is shocking and often leads to game-breaking goals that the opposition never quite recovers from. The Perfection Line kicks down the door and it snowballs from there.

The problem is that line has no choice but to excel because its counterparts have stumbled out of the gates. When Boston’s top unit is off the ice, the team owns just 46.6% of the scoring chances, 44.1% of the high-danger bids and 46.3% of the expected goals. Those are bottom-of-the-barrel numbers. Stellar goaltending from Tuukka Rask (1.48 GAA, 95.2 SV%) and Jaroslav Halak (2.59 GAA, 91.9 SV%) pushes its GF% to 50.0, but this squad can’t depend on one line this heavily over the entire season. Bergeron, Marchand and Pastrnak’s PDO as a trio (104.6) is sure to normalize as the year progresses, which will surely take a bite out of its offense in due course. Moreover, they only play for about 19 minutes a night. That’s a lot of time during which the rest of the team must at least break even.

Thankfully, Krejci is set to return on Tuesday night and will look to rekindle his rapport with DeBrusk. This also pushes Charlie Coyle (4 points in 11 games) down to the third line, where he’ll face easier competition. Of course, this means little until it materializes on the scoresheet.

In the meantime, the Bruins will ride their horses for as long as possible. Their top line is on an absolute tear, while the team ranks first in goals allowed.