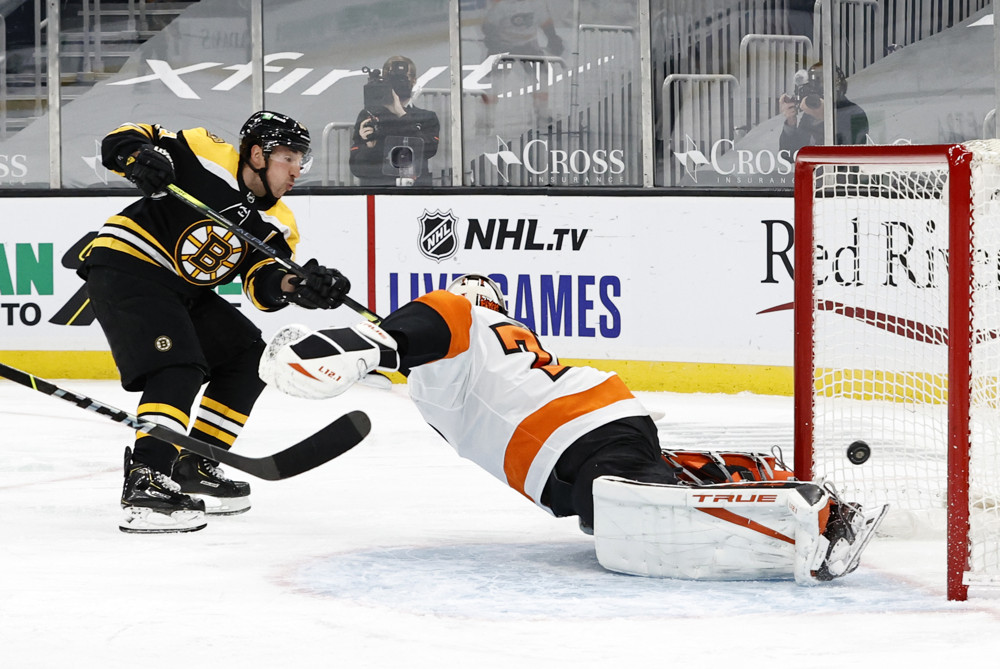 When a star player is sidelined, the rest of the team must step up. But that doesn’t mean abandoning your post altogether to fill the void. You rise to the occasion by rallying around your identity.

With star winger David Pastrnak out (hip injury) to start the 2020-21 season, the 2-1-1 Boston Bruins have still done virtually everything right. They’ve generated opportunities at a great clip while maintaining their stout defensive structure. The numbers bear that out too: The Bruins’ current expected goal rate at 5-on-5 (2.40) is actually higher than it was a year ago (2.12), whereas its xGA60 has improved despite the departures of Zdeno Chara and Torey Krug in free agency (1.79 vs. 1.98).

Unfortunately, controlling games only gets you so far if you don’t produce goals.

Bruce Cassidy’s men have mustered just nine of them in four games. Their offense ranks 29th in the league. Ondrej Kase’s upper-body injury hasn’t helped matters either. As such, the Bruins have begun to stray—if only to a minor degree—from their coach’s battle-tested formula.

Their 5-4 victory over the Philadelphia Flyers on Thursday night provided relief, but there were also signs of bad habits creeping into their game. Boston has begun passing up clear shots in favor of languid, low-percentage setups. That isn’t the Bruins’ bread and butter. Some of the players are indeed snake-bitten (see: Craig Smith), but it’s their decision-making that is costing them at the point of attack. Take a look at their refusal to fire the puck from quality locations against the Flyers:

Choosing to pass is fine in and of itself, but the choice needs to come with conviction. Tempo. Whether they’re shooting or creating, the Bruins excel when the puck doesn’t stop. They’ve overthinking every situation at the moment, and when your offense lives and dies by your quick-trigger killer instinct, well…it dies.

Since Cassidy signed on as the team’s bench boss, Boston has thrived on attacking the middle of the ice in dizzying flurries. The Bruins go from the perimeter to your front door faster than any club in the NHL—not with cutesy, roundabout buildups but with direct, decisive net-front chaos.

Thankfully, one forward has stuck to his guns amidst the team-wide slump. Charlie Coyle, who’s revived his career since joining the Bruins in 2018-19, was absolutely everywhere on Thursday night. At 6’3” and 220 pounds, the 28-year-old is a surprisingly fluid skater. When you combine that mobility with strength, puck control and a tendency to drive play straight down his opponents’ throats, you get chances. Lots of them. Philadelphia was on its heels throughout Thursday’s contest due to Coyle’s relentlessly aggressive style.

His line alongside Smith and Anders Bjork was the most dangerous on either side and posted a ridiculous 96.0 xGF%. While the higher-profile forwards were faltering, Coyle was leading the charge:

His approach isn’t rocket science. He gains a head of steam and drives play from the outside to the heart of the defense as soon as possible.

That’s how the Bruins play when they’re firing on all cylinders. They immediately funnel pucks toward the middle of the ice because they believe they hold the upper hand in the trenches. And for the past few years, that faith has carried them to solid postseason runs. Would they be even deadlier with a sniper of Pastrnak’s caliber available? Of course, but Boston can certainly hold down the fort in his absence.

Thursday’s result is evidence of just that.

Once Coyle’s teammates remembered what makes them such a daunting opponent, they put the Flyers through the wringer, scoring four goals in the third period alone.

First, David Krejci spins to the forehand and rockets a pass to Jack Studnicka as the youngster crashes the net. The puck trickles through for an easy tap-in:

Then, it’s Coyle’s turn to claim his reward for a terrific performance. Take note of how often his line either throws the puck into the slot or on net without hesitation. It’s not pretty, but it’s utterly exhausting to defend:

On the power play, Boston resembles a well-oiled machine. There is no extended setup. No one holds on to the puck for too long. Off the won draw, Matt Grzelcyk feeds Krejci for a one-timer from the point. Nick Ritchie tries to cram the bounce off the boards past Carter Hart. Brad Marchand recovers the puck and instantly finds Patrice Bergeron for a quality look. Then Krejci feathers a pass into the slot, Bergeron’s bid is blocked, yet he manages to force the puck through to Ritchie for a huge tying effort:

More of the same on Brandon Carlo’s 4-3 marker:

Was that a weak goal for Hart to allow? Sure, but if you unleash enough shots and test a goaltender’s mettle over and over again, nearly all of them will buckle. The Bruins were inches away from winning in regulation on account of that very same net-front dominance:

When the Bruins are the Bruins, they’re voracious at the point of attack. Repelling them when they keep bombarding the most important area of the ice is a tall order. Therefore, Cassidy’s troops can’t relent. They can’t allow frustration to seep in and pull them away from their recipe for success. They need to double down on it.