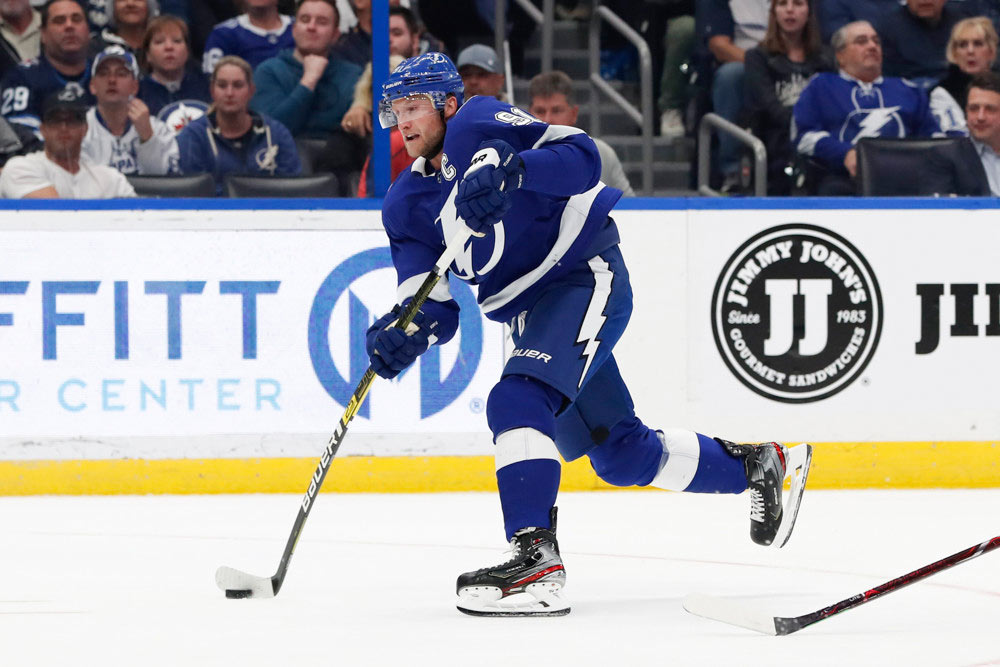 The Tampa Bay Lightning couldn’t have hoped for a better start to Game 5 of their first-round matchup against the Columbus Blue Jackets.

Columbus looked to impose a rough-and-tumble environment and Joonas Korpisalo made an outstanding save to deny Cedric Paquette early, but the Lightning weren’t discouraged. They remained calm and stayed the course. The result? Tyler Johnson deflected home the opening goal of the contest. One minute later, Blake Coleman beat Korpisalo on the type of wrister he had stopped with his eyes closed throughout this year’s playoffs:

Then the Lightning took their foot off the gas. Following a late first-period marker by Nick Foligno, John Tortorella’s men swarmed Tampa Bay to the tune of 24 shots in the second frame. They outchanced the Lightning 13-4 and owned 79.1% of the expected goals at 5-on-5.

Korpisalo’s counterpart, Andrei Vasilevskiy, provided a number of remarkable saves in an effort to maintain his club’s advantage:

Alas, Tampa Bay had stopped playing entirely. It wasn’t skating. It wasn’t connecting on routine passes. It was turning pucks over cheaply. It lacked urgency and discipline, committing six penalties to Columbus’ zero over the course of the afternoon. Head coach Jon Cooper could only look on in horror as the series shifted from a Lightning stranglehold to decidedly murkier territory. Another collapse at the hands of the Blue Jackets felt inescapable.

Soon enough, the floodgates opened. Kevin Stenlund scored on the power play to even up the score. Then Alexander Wennberg produced the go-ahead goal while the Lightning watched star winger Nikita Kucherov cross-check Foligno in the face instead of…well, watching the play.

On Columbus’ 4-2 goal, Tampa Bay literally couldn’t get out of its own way. Mikhail Sergachev, who suffered through a rough series, bumps his netminder and thus allows Oliver Bjorkstrand to chip the puck into an empty net:

The Lightning were handing this game to the Blue Jackets on a platter. If Columbus could build on this momentum, Cooper’s outfit may well have given the series away.

Unfortunately for the Blue Jackets, their biggest strength this summer finally dropped the ball. Korpisalo (1.90 GAA, 94.1 SV%) was the single biggest reason Columbus sent the Toronto Maple Leafs packing in the play-ins and he had been sterling throughout his team’s first-round series. The 26-year-old appeared well on his way to establishing himself as the club’s netminder of the future. However, this hot streak essentially came out of nowhere. His career (2.80 GAA, 90.8 SV%) and 2019-20 (2.60 GAA, 91.1 SV%) numbers are nothing to write home about and he had offered no prior indication that this was his crease.

In fact, Columbus was so impressed by its other netminder (Elvis Merzlikins) that it tendered him a two-year, $8 million extension in late April after 33 total appearances. Korpisalo stealing a series or two was never part of the plan.

Though it was spectacular while it lasted, that magic was bound to run out eventually.

And it did in the most painful sequence of events. After scoring four unanswered goals, the Blue Jackets had planted a seed of doubt in the Lightning’s mind. Was the same story unfolding in a different year? Could Tampa Bay beat Columbus in a best-of-seven series? As the door closed on the Lightning’s hopes in Game 5, Korpisalo cracked it open again in the third period:

Offensive blueliner Kevin Shattenkirk whistled a slap shot through Korpisalo to drag his team back into the proceedings. It was a decent if entirely stoppable bid. Since Columbus had been running on out-of-this-world goaltending, Korpisalo’s return to earth was coming at the worst moment imaginable. A fluky bounce in the waning minutes of regulation sent the game to overtime minutes later, and there was a sense that Columbus’ season had already slipped away.

Roughly five minutes in, Vladislav Gavrikov kicks the puck right to Kucherov. He feeds Brayden Point in the slot and the big-game center buries a backhand top shelf to eliminate the Blue Jackets:

Obviously, no one can blame Korpisalo on that particular breakdown, but the game should have never reached that point.

Goaltending aside, this was clearly Columbus’ best outing of the series. It registered a 65.1 xGF% compared to its pitiful 34.5 xGF% in Games 1-4. It was hounding the puck and forcing a listless Lightning group into countless mistakes. The defensemen were activating to generate more opportunities. It was too little, too late, though. The script was ultimately flipped, as the Blue Jackets’ skaters dominated their opponents only to be let down by their goaltending. Tampa Bay, a streaky and emotional club, was buoyed by the realization that Korpisalo is indeed human. The scoring chances in overtime were 7-1 in its favor and it notched three high-danger opportunities to Columbus’ zero. The outcome was a formality.

It’s unfair to hold Korpisalo to standards he had never come close to setting previously, but his extraordinary play was precisely why the Blue Jackets had come this far. They averaged just 2.22 goals scored per game in the postseason. Meanwhile, he was performing like one of the best netminders in the world—a source of great frustration for the opposition and supreme confidence for his teammates. They could dig their heels in and outlast their opponents because their goaltender seemed bulletproof.