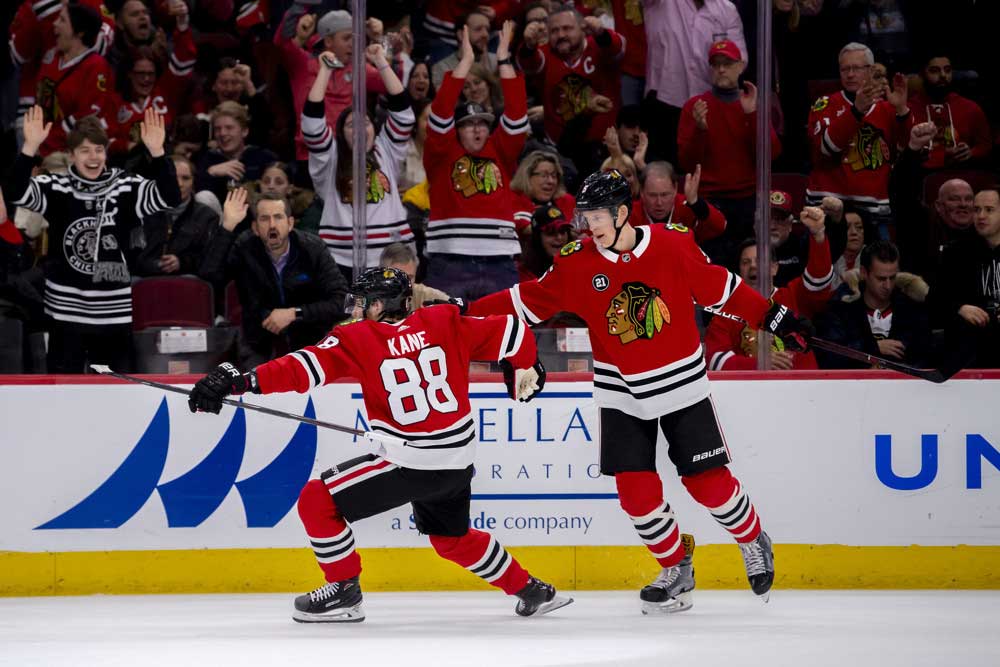 There’s nothing like a league-high 18-game scoring streak to launch yourself into the Art Ross Trophy race. With a team-leading 36 goals, 54 assists and 90 points, Chicago Blackhawks‘ sniper Patrick Kane now sits in second place in the NHL scoring race with 90 points. He’s nine back of Nikita Kucherov of the Tampa Bay Lightning who has 99 points on 29 goals and 70 helpers with each player having 22 games to play.

The 30-year-old Kane of Buffalo, New York has carried the Blackhawks on his back lately and the team was sitting just one point out of the last Western Conference playoff spot on Feb. 19th. Chicago has gone 8-2 in their past 10 outings, but they’re still one game below .500. This definitely hasn’t been a banner year for the franchise with their 25-26-9 record, but they’re fortunate enough to be playing in the weaker West.

Things looked bleak earlier in the campaign and this resulted in the firing of long-time head coach Joel Quenneville on November 6th and he was replaced by Jeremy Colliton. The Blackhawks were 6-6-3 at the time so haven’t really caught fire under Colliton by going 19-20-6 so far. It’s arguable if the coaching move was the right one to make, but with most of the Western teams slipping and Chicago playing at an even keel they’re in the thick of the playoff race.

Kane hasn’t been a one-man team over the last 18 games, but he’s been close to it. He’s notched 40 points over that span with 14 goals and 26 assists. He’s been getting some help from the likes of sophomore Alex DeBrincat as well as newcomer Dylan Strome and fellow veteran Jonathan Toews. The 21-year-old DeBrincat has 32 goals and 60 points in 60 games while the 30-year-old Toews has also chipped in with 60 points on 28 goals and 32 helpers.

As for Strome, the 21-year-old appears to have found his feet in Chicago after struggling while playing for the Arizona Coyotes. Strome was drafted third overall by Arizona in 2015 and made his NHL debut in 2016/17. He played just seven games as a rookie and then posted four goals and five assists in 21 outings the next season. The 6-foot-3-inch, 200 lb center started slowly in the desert again this season with three goals and three assists after 20 contests and a minus-10 rating.

Arizona then gave up on him and shipped Strome to the Windy City for fellow forwards Brendan Perlini and Nick Schmaltz. Since arriving in Chicago, the youngster has produced at almost a point-per-game rate with 12 goals, 23 assists and 35 points in 36 contests and is a plus-5. His fine play will eventually cost the Blackhawks though as he’s scheduled to become a restricted free agent after the 2019/20 season.

Strome was once regarded as a bust, but now it looks like he’s just a late bloomer. If the Mississauga, Ontario native can keep up the fine play over the next year his agent will certainly be looking to cash in on it. Chicago general manager Stan Bowman shouldn’t be worried about it though since it looks like he’s found a rising young star via Arizona. Strome is finally playing to his potential and the trade could very well end up being a steal for Bowman. He’s been centering DeBrincat most nights and the two of them are recreating the chemistry they enjoyed as juniors.

The duo played together for three years in the Ontario Hockey League with the Erie Otters and know each other well. Strome led the OHL in scoring in his draft year with his 129 points and was selected behind Connor McDavid and Jack Eichel. Strome and DeBrincat are obviously bringing out the best in each other and are playing with a lot of confidence. With that pair racking up points along with Kane and Toews the Blackhawks may just make the postseason after all.

They’re going to have to do a better job at keeping the puck out of their net however. They downed the Ottawa Senators 8-7 at home on Feb. 18th in the NHL’s highest-scoring shootout this season, but that performance certainly didn’t impress Colliton. The Blackhawks are still waiting for goaltender Corey Crawford to return to the crease after suffering from concussion problems and until he does Colliton will be depending on Collin Delia and veteran Cam Ward between the posts.

They can’t afford to play run and gun hockey every night though and expect to come out on top game after game now matter how well their offensive leaders are performing. Kane knows anything can happen if the Blackhawks make the postseason and with their names engraved on the Stanley Cup three times he and Toews have the experience to lead the way.

Kane recently told the Chicago Tribune Newspaper, “If you talked to a lot of us 15, 20 games ago you’d probably think we all thought we’d be out of the playoffs or we’d have to go on some big runs and some crazy numbers to get ourselves in. It’s pretty crazy how everything’s unfolded. But what a great position we’re in just behind a wild-card spot and we play some of these teams down the stretch too, so it’ll be an interesting finish to the season.”

If Chicago does make the playoffs, Kane should definitely get some consideration when it comes to naming the finalists for the Hart Trophy as the player deemed most valuable to his team. Kucherov is likely to be the favorite, but Kane’s performance this season isn’t far behind the Russian’s.

Kane has scored 1.53 points-per-game this season and is on pace for 49 goals and 123 points if he can keep it up. The last time he was this dominant for Chicago was in 2015/16 when he led the league in scoring, won the Hart Trophy and Ted Lindsay Award and was named to the First All-Star Team.

He racked up 46 goals and 60 assists for 106 points that campaign, which were all career highs. He may blow those numbers out of the water this season, but it won’t mean much to him and the team’s fans if Chicago fails to make the playoffs.