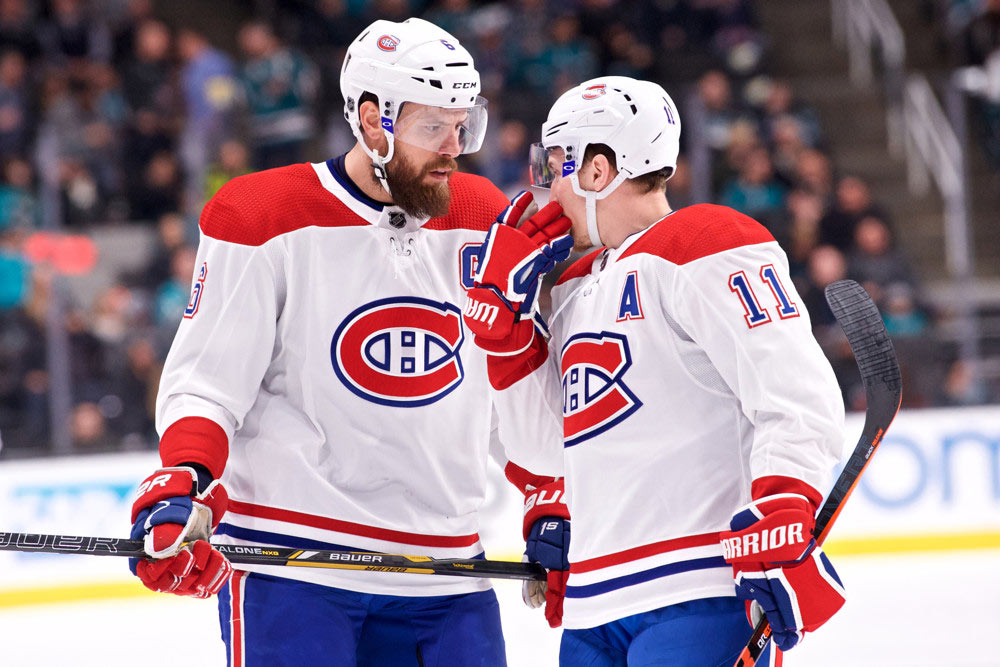 The Montreal Canadiens are probably kicking themselves right now for not taking advantage of recent losses by the Carolina Hurricanes and Columbus Blue Jackets. The three teams are fighting for a wild card playoff spot in the Eastern Conference, but the race is currently being run at a snail’s pace.

The Hurricanes have lost two in a row and Columbus lost their last game and are just 4-6 in their past ten contests. However, the Habs also lost their second straight outing on March 8th and have gone 5-5 in the past ten. To make matters worse, both Columbus and Carolina have two games in hand on Montreal and the Philadelphia Flyers are seven points behind them with a pair of games in hand.

The Canadiens were just hammered 8-2 by the Anaheim Ducks, who are the lowest-scoring squad in the NHL. The night before they were downed 5-2 by San Jose during their west coast road trip and they’ve now won just three of their past 18 games in the state of California. Montreal has 13 games to go in the season and needs to turn things around immediately or risk sliding down the standings. Their power-play has gone missing in action with just two goals in its last 32 chances and the team’s success rate with the man advantage this season is a measly 12.4 per cent.

Their backs are against the wall now and it’ll be interesting to see how they respond. The Habs’ remaining schedule sees them face some of the league’s toughest teams in the Toronto Maple Leafs, Winnipeg Jets, New York Islanders, Washington Capitals and Tampa Bay Lightning, but they also take on some of the lesser lights such as the Detroit Red Wings, Florida Panthers, Chicago Blackhawks and Buffalo Sabres. In addition, they clash head to head with the teams they’re battling with in the playoff race, Carolina and Columbus.

The recent losses have sparked several debates in the Montreal media and on team websites as some fans are beginning to question head coach Claude Julien.  For some reason Julien decided to sit rookie center Jesperi Kotkaniemi for the first two games in California against the Los Angeles Kings and the Sharks.

Kotkaniemi is the youngest player in the league this year and has racked up a respectable 32 points, but Julien claimed he scratched him because he needed the rest. However, the player told the media he was feeling fine and just had to accept the coach’s decision. The two-game rest certainly didn’t help the youngster as he lost his rhythm and was a minus-3 against the Ducks, went 22.2 per cent in the faceoff circle and was guilty of a few giveaways. It was a rare off night for a player who’s been so defensively responsible this season.

In addition, Julien has come under fire for his handling of the team’s goaltenders. He started 35-year-old backup Antti Niemi in the 5-2 loss to the Sharks and his performance was one of the reasons the Habs lost a game they dominated. Many fans felt Carey Price should have started against the stronger San Jose team and Niemi should have gotten the nod against the struggling Ducks the next night.

As it turned out though, the 31-year-old Price was just as bad in Anaheim as he let in all eight goals. When Price does win his next game he’ll become the franchise’s all-time leader in goaltending wins as he’s currently tied with Hall of Famer Jacques Plante. However, if he played the way he did in Anaheim it’s doubtful he would have earned two points against the Sharks.

But perhaps the goaltending situation shouldn’t be entirely pinned on Julien since his hands are tied when it comes to Niemi as the backup. General manager Marc Bergevin should be taking some of the heat since it’s been obvious most of the year that the team needs to upgrade in that position. Niemi’s record stands at 8-6-2 this season with a goals-against average of 3.78 and an 88.7 save percentage.

Price had started 15 games in a row before he was rested in San Jose and he may have to start the remaining 13 if the Habs are going to make the postseason. Julien obviously isn’t comfortable with Niemi between the posts and Bergevin should have sought some help in net before the trade deadline passed.

The Habs also need more production out of their top forwards such as Tie Domi, Tomas Tatar and Jonathan Drouin as well as Jeff Petry on the blue line. However, they first need Tatar to return to the lineup as he missed the game in Anaheim with the flu. It’s not that these players have had bad seasons because they haven’t. But they have slowed down over the past few weeks and it’s been quite noticeable on the ice.

Tatar has a goal and assist in his last five contests while Domi has just one assist and is a minus-3. Petry has no points and is also a minus-3 in the last five outings and Drouin has failed to register a point during that stretch and is a minus-5.

On the bright side, 26-year-old winger Brendan Gallagher has notched 15 points in his last 16 games with 11 goals and four helpers. He now leads the team in goals with 30 and has also chipped in with 15 assists. Gallagher, who was named to the NHL’s All-Rookie Team in 2012/13, finished last season with 31 goals and 54 points with a minus-13 rating and is a plus-10 this year.

He’s only 5-feet-9-inches tall, but is a tenacious forechecker who isn’t afraid to do the digging in the corners. Gallagher’s also a supreme agitator who leads by example and has proven to be a consistent scorer at the top level. However, he isn’t the type of player who can carry a team on his back by filling the net with pucks night after night.

Montreal’s certainly not out of the playoff picture, but they’ve recently been trending in the wrong direction. Their fortunes will greatly depend on Price’s work in net the rest of the way, but the team also needs to pick up the scoring to help him out, especially on the power-play. If they don’t quickly improve in these areas their season will come to an abrupt end on April 6th.