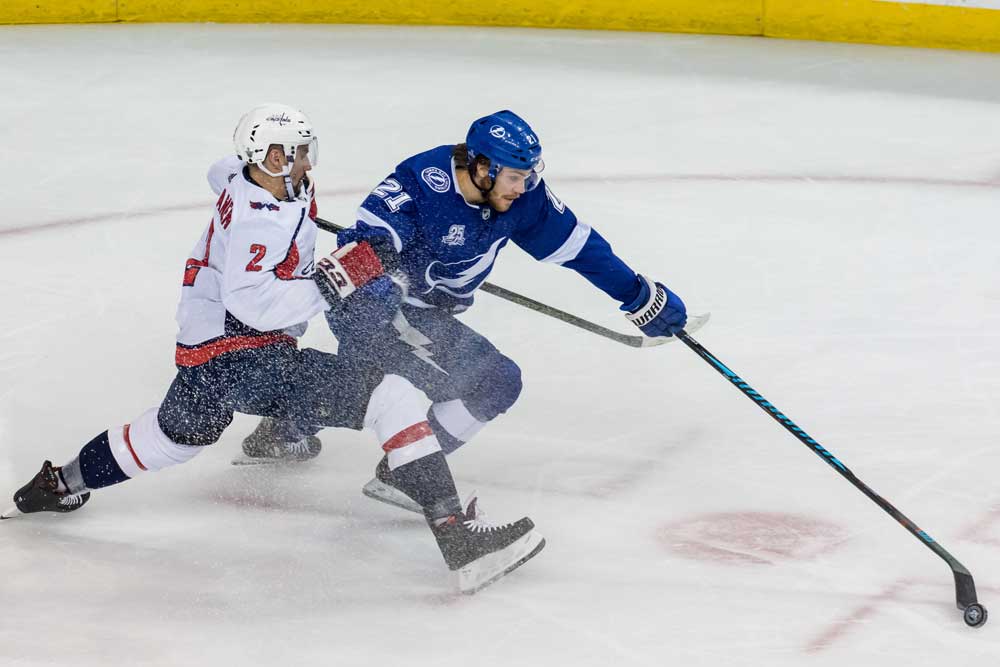 Despite three conference final appearances in the last four NHL campaigns, the Tampa Bay Lightning are likely disappointed by their recent run. Their roster is indeed that good from top to bottom. Their head coach, Jon Cooper, is among the brightest in the sport. All the pieces seemed in place for a championship, but they just couldn’t reach the promised land.

According to Natural Stat Trick, they control 53.5% of the shot attempts (6th), 55.5% of the scoring chances (2nd) and 56.7% of the goals scored (4th) at 5-on-5. Their overall scoring output is unrivaled, whereas only five teams defend better. When we look at special teams, they rank third on the power play and fifth on the penalty kill.

This all-situations brilliance has propelled them to a league-best 25-7-1 record. The burning question now is whether history will repeat itself.

After all, they put up the best record in the East (54-23-5) last season and performed very well (7th in CF%, 4th in SCF%, 1st in GF%) in key metrics before falling short in the third round of the playoffs.

Thankfully for the Lightning, this season feels different. They still play at a tempo that few teams can match, but a change in the pecking order and improved depth have maximized the benefits of Cooper’s system. The team has transformed into an overwhelming force on most nights.

Up front, 2014 third-round draft pick Brayden Point (41 points in 33 games) continues to defy expectations. In his third year as a pro, the 5’10”, 166-pound center has risen to such heights that he’s become the team’s most important forward. His endless motor and high hockey IQ allow him to leave his mark all over the ice. On the power play, his quick hands in tight offer the Lightning a more direct alternative to the one-timer threats of Nikita Kucherov and Steven Stamkos.

Not only is Point a consistent contributor on offense, he’s frequently tasked with defending the opposition’s best line. While he isn’t a pure shutdown artist, his ability to win tough matchups (51.1 CF%, 53.6 SCF%, 60.0 GF%) sets the table for the other forwards to dominate.

Kucherov is an offensive phenom whose 47 points rank fourth in the league. His double threat as a deft passer and clinical finisher translates to the man advantage as well, where he trails only Keith Yandle with 19 points. Without as much pressure to carry the load, Stamkos (33 points in 33 games) can merely handle his business of producing offense. The captain is streaky, but there’s no denying his talent.

Beyond its building blocks, Tampa Bay has depth for days.

Tyler Johnson (23 points in 32 games) and Yanni Gourde (24 points in 33 games) use their speed to pounce on mistakes. Ondrej Palat (10 points in 17 games) is among the more underrated players in the game. His smarts and fundamentals lend a defensive conscience to whatever unit he finds himself on. Alex Killorn (18 points in 33 games) provides a veteran presence and decent offensive upside.

If the game takes on a physical tone, Cedric Paquette and JT Miller can hold their own. Paquette, in particular, is a total wrecking ball who ranks fourth in the entire league in hits. Miller, for his part, combines a solid frame (6’1”, 218 lbs) with equally solid skill (25 points in 33 games).

With that said, a rookie has reshaped and reinvigorated the bottom six. 21-year-old winger Mathieu Joseph (13 points in 32 games) plays right into the team’s speed-oriented philosophy, as his wheels and tenacity are a nightmare to contain. Deployed mostly with Anthony Cirelli and Killorn, Joseph has posted remarkable underlying numbers: 55.0 CF%, 59.4 SCF%, 61.5 GF%.

In the past, the Lightning’s forward core felt decidedly top-heavy. Opponents would have to deal with one world-class half and one mediocre half. That room to breathe no longer exists. Tampa Bay throws the kitchen sink at you for 60 minutes.

The defense supports this frenetic approach.

Hedman (18 points in 26 games) is the type of blueliner you would create in a lab…or video game. The 6’6”, 223-pound behemoth skates like the wind, and he uses this asset to create havoc on the attack. Dealing with the team’s forwards is already difficult enough. Throw Hedman into the mix, and it’s essentially an exercise in futility. Though he isn’t the soundest defenseman in the world, he isn’t asked to be. With his mobility, reach and instincts, he can impact the game in a way that no other blueliner can.

Behind the reigning Norris Trophy winner is Ryan McDonagh. Whether he was slow to adapt to his new club or felt the lingering effects of an upper-body injury, the 29-year-old never looked right after Tampa Bay acquired him last season. He’s certainly more comfortable now.

As the steadiest of the team’s defensemen, he is mostly depended on in his zone. His coverage and puck management have returned to form, and his GF% has increased accordingly from 52.4 to a staggering 64.3. That’s the second-highest mark among defensemen who have played at least 500 even-strength minutes in 2018-19. He’s also chipped in offensively with 21 points in 33 games. Any signs of tentativeness have disappeared, as he’s willing to jump into the play when he sees fit. That confidence is reflected in his IPP spike from 18.2% to 41.7%. In essence, he’s shifted from uneasy passenger to emboldened driver.

This has naturally solidified the back end. Now opponents must face either Hedman or McDonagh at the height of their powers for about 44 minutes a night. Yikes.

When they aren’t on the ice, Mikhail Sergachev (11 points in 33 games) is granted the luxury of feasting on the scraps. The 20-year-old has all the tools of a gifted offensive defenseman: the wheels, the patience, the vision, the shot. While he’s far from a finished product, he can dominate lower competition in his current state. The stats corroborate the eye test: 56.8 CF%, 57.7 SCF%, 59.5 GF%.

The fact that Cooper can throw nearly any five-man group out there and watch it carry the play is special. It’s not only a testament to the personnel but the system he’s put in place to leverage its abilities. Tampa Bay is riding a sustainable 101.4 PDO too (102.3 last season), so it’s here for the long haul.

If there’s a question mark on the roster, it’s starting netminder Andrei Vasilevskiy (2.20 GAA, 93.3 SV%). His talent is not in doubt. At 6’3” and 207 pounds, he boasts the prototypical modern build and couples that with both remarkable athleticism and a scrappy, never-give-up attitude. However, he faltered in dramatic fashion last year. As shown in his 2017-18 splits, he devolved into one of the worst starters in the NHL once March arrived. Perhaps 65 starts was pushing it and the team should lighten his burden.

For that reason, and assuming he’s completely healthy, his foot fracture in November could be considered a blessing in disguise. Even if he plays at the same rate as last season, he would only start 50 or so contests, which should keep him fresher for the stretch run.

Aside from that concern, the Lightning are a well-oiled machine. They can send wave after wave at you, and they play at such a rabid pace that staying afloat throughout an entire game — let alone a playoff series — feels impossible. This isn’t a matter of lining up that one knockout blow. They swarm you with volume, unleashing a barrage until you buckle from sheer exhaustion.

The forward depth can’t be touched. The defense is led by two of the best in their respective roles. The goaltending is likelier to hold up. After a few close calls of late, the stars may have finally aligned in Tampa Bay.