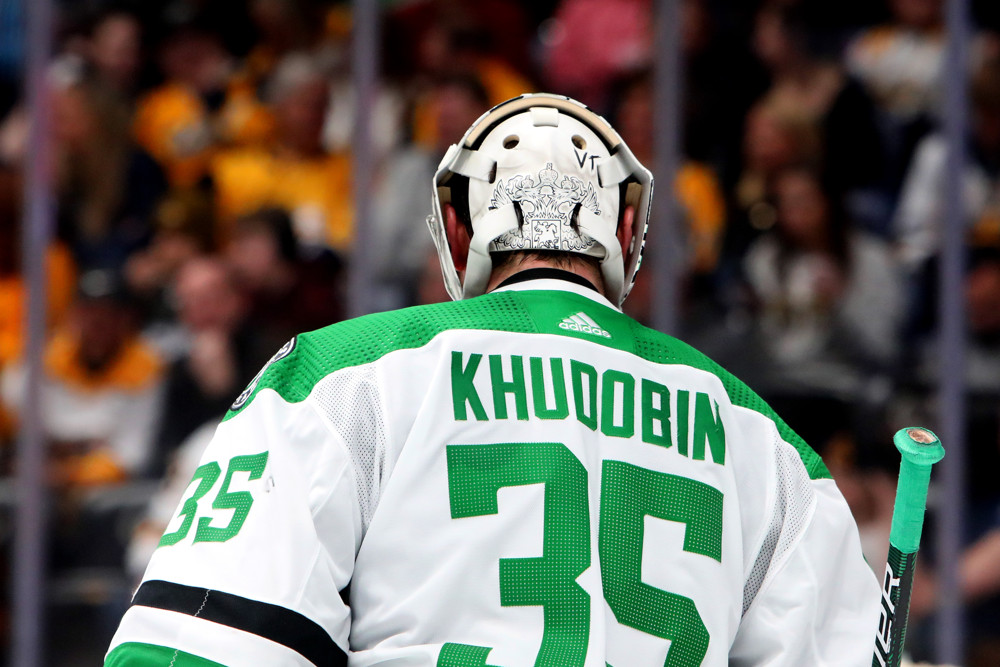 Through three games of the Western Conference Final, very little is separating the Dallas Stars from the Vegas Golden Knights. One win and one goal, in fact. Vegas was shut out in Game 1, Dallas was blanked in Game 2 and the Stars claimed an overtime victory on Thursday night to establish a 2-1 series lead.

It’s hard to tell where this matchup is headed. Moreover, Game 3 was simply hard to watch.

The teams involved and the 3-2 final score might suggest a grind-it-out chess match, but the contest was actually an unmitigated train wreck. Both squads committed a slew of mistakes all over the ice, gifting each other chance after chance to seize the driver’s seat. In the end, only their lack of pure firepower stood in the way of a back-and-forth barnburner.

Perhaps it’s fitting, then, that Anton Khudobin played the hero in such a chaotic affair. The 34-year-old journeyman never makes an easy or effortless save. Due to his slighter build (5’11”, 195 lbs), Khudobin often strays far from his crease to close shooting angles that would be comfortably handled by the prototypical modern netminder. As a result, his performances are punctuated by heart-stopping scrambles and acrobatic second-effort stops.

He just battles in between the pipes.

Dallas needed every ounce of his fighting spirit in Game 3 because its defensive structure was nonexistent. Instead of rebounding from a shutout loss with a sharp, disciplined outing, Rick Bowness’ troops were coughing pucks up left and right.

John Klingberg set the negative tone for his team early in the first period:

The blueliner retrieves the puck below his goal line and seemingly doesn’t feel Jonathan Marchessault on his back, resulting in a gratuitous net-front opportunity for the Golden Knights.

That unforced error was emblematic of a horrid showing by the Stars. Their decision-making and neutral zone gaps were awful throughout the night, which obligated Khudobin to elevate far beyond his usual level of play (2.77 GAA, 91.5 SV% in the playoffs). While the teams traded sloppy sequences to begin the game, Dallas unraveled at the end of the second frame.

Denis Gurianov flips a ridiculous two-foot-high pass to Klingberg at the point. Unable to corral the biscuit or slow William Karlsson down, he can only watch as Khudobin outwaits the forward on the breakaway:

From that point on, Vegas hit full throttle. It outshot the Stars 18-4 in the third period and controlled 64.7% of the scoring chances as well as 77.8% of the high-danger opportunities in all situations to close the contest. The ice was heavily tilted toward Khudobin’s crease, and he was the lone Star who appeared poised under this relentless pressure. Klingberg was a disaster. Miro Heiskanen, who is indeed emerging as a two-way star, alternated between brilliant and wretched moments. Esa Lindell, the most reliable rearguard on the roster, wasn’t winning his battles or making the quiet plays along the wall that often kick-start Dallas’ attack.

It was basically Khudobin against the world.

Midway through the third period, towering defenseman Jamie Oleksiak allows Karlsson to steal the puck and scoop a surprise bid on goal:

Following a failed coach’s challenge, the Golden Knights were granted a power play with the lead up for grabs. Unfortunately for them, Khudobin had saved his best for last. First, he repels Max Pacioretty’s wrister from the slot before kicking out Mark Stone’s rebound attempt:

Then, he stops Alex Tuch’s deflection and the ensuing rebound with a stunning flick of the skate:

He was simply unbeatable along the ice. That was never more evident than toward the tail end of that man advantage. Stone once again works the cross-ice seam, but this time, Pacioretty detects Reilly Smith open on the other side of the crease. He rockets a pass across only for a prone Khudobin to extend his trailing leg and deny Smith in tight. Remarkable stuff:

Ultimately, he stopped 38 of the 40 shots Vegas fired in his direction. The two bids that did beat him? A point shot that deflected off Radek Faksa and a bizarre tip on which Mark Stone appeared to interfere with Khudobin. Otherwise, he turned the Golden Knights’ clean looks—however dangerous—away repeatedly. His performance wasn’t textbook and he may well have buckled had the barrage continued for another full period, but he held the fort down just long enough for Alexander Radulov to end the game on the first shot in overtime.

Much like the Stars’ unlikely playoff run, Khudobin’s night was…scary, but he delivered when it counted nonetheless. While Dallas was fighting the puck, he fought even harder in the crease.