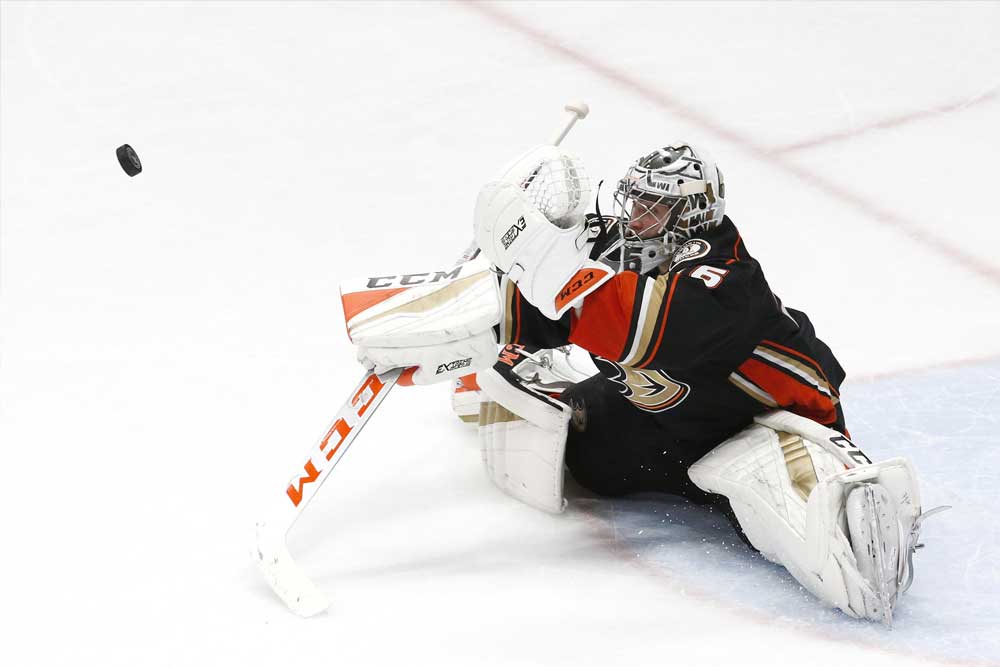 In the playoffs, a red-hot goaltender can propel his franchise to the summit. Over the course of an entire regular season, a red-hot goaltender…usually cools off. That’s precisely what’s happening in Anaheim, as John Gibson has finally buckled under the pressure of bailing his squad out every night.

Despite holding the second wild-card spot in the Western Conference, the 19-17-7 Ducks have dropped eight straight games and can surely feel the bubble teams breathing down their neck.

The offense hasn’t suddenly vanished — it was never there to begin with. Anaheim ranks 30th in goals per game, 25th in goal differential and first in on-ice save percentage. That paints a clear picture: When the Ducks win, they eke out close, hard-fought victories. It’s no surprise that they possess the eighth-best win percentage in one-goal games. Their performance wasn’t sustainable, though, and it’s caught up to them during this lengthy slump.

Frankly, this was inevitable.

The 25-year-old is without question a world-class netminder. He’s athletic, composed and laser-focused between the pipes. He’s also economical and quiet in his movement. However, he can’t secure a postseason berth on his own. No single player can.

Through the first half of the 2018-19 season, Gibson has repeatedly stood on his head as the team in front of him has struggled to keep its own above water. Anaheim controls just 47.1% of the shot attempts (26th) and 44.7% of the scoring chances (29th) at 5-on-5. For a playoff team, those are putrid numbers. The Ducks have regularly been outworked and outplayed only to submit their ace in the hole: Gibson.

Obviously, that approach isn’t viable right now. He’s not a lost cause by any stretch of the imagination — he just needs a break in the barrage to get back into the groove.

There isn’t much help to come by.

Ondrej Kase (19 points in 25 games) definitely can’t be faulted. Though he was picked 205th overall in the 2014 draft, the 23-year-old winger is a budding star who combines quickness, elusiveness and finishing ability. In addition to his raw production, the dynamic forward has posted a 58.2 CF% and 58.3 SCF% on a team that has been soundly dominated this year. Among forwards who have played at least 300 even-strength minutes, Kase’s club-relative stats rank near the very top of the class.

Captain Ryan Getzlaf (29 points in 37 games) has also fared well. His vision and patience remain superb, as he often holds on to the puck just long enough for a passing lane to materialize. At 33 years old, however, he needs support to revive the offense.

Beyond those two, Anaheim is sorely lacking difference-makers. Adam Henrique (23 points in 43 games), Jakob Silfverberg (17 points in 38 games), Rickard Rakell (20 points in 30 games) and newcomer Pontus Aberg (19 points in 37 games) are all serviceable pieces, but they don’t really drive the play. They aren’t going to set the tone or shift the momentum of a game.

This is exactly why the second line’s issues hurt so much. Following hip surgery in 2017, Ryan Kesler looks like a shell of his former self. The two-way center remains stingy as ever on the defensive side, but he’s managed six points in 40 games this season. Six. That’s a stunning turn of events for a player who could be depended on for 50-60 points over the past decade.

Speedy winger Andrew Cogliano has been severely impacted by Kesler’s troubles, as he’s posted just eight points in 43 contests. Though he still has the wheels to keep up, he’s not the type of winger to command the puck and dictate the play.

Another health-related consideration is Corey Perry’s absence. The winger tore his meniscus in preseason and is set to return in March. His prime left the building a few years ago, but he will provide a valuable net-front presence to a club that often seems content to sit on the perimeter. When he and Getzlaf get into a rhythm — whether they’re together or on separate lines — Anaheim is significantly more dangerous.

Until reinforcements arrive, the defense may need to step up and generate more of a push from the back end. Brandon Montour (20 points in 43 games), Cam Fowler (10 points in 20 games) and Hampus Lindholm (17 points in 37 games) are certainly capable of jumping into the play, but they face an uncomfortable dilemma: Can they afford to take risks and supplement the attack if Gibson isn’t at the top of his game?

There isn’t an obvious answer. Offense from the blue line is always welcome, yet offering it without exposing yourself defensively is no easy task.

Injuries and questionable team construction have conspired to bury Anaheim’s offense. Unless opponents hand them chances on a silver platter, they rarely manufacture much of an attack. Through 43 games, they haven’t looked like a convincing counterattacking group either.

Ultimately, the Ducks’ success in the second half of the year will hinge on the forwards. There aren’t many top-tier players in the mix, but if they can band together and score by committee, they can right the ship. There can’t be any passengers who are happy just to come along for the ride. From Henrique and Cogliano down to Carter Rowney and Daniel Sprong, they have to push themselves to create offense and thus lighten the burden they’ve placed on the defense and goaltending.

Hockey is a team sport after all.

Gibson is Anaheim’s most valuable player, but he can’t carry an entire club on his back — well, not for the whole season. A few more goals here and there would do him a world of good, leaving him refreshed and raring to get back on track.

Given the personnel on hand, however, the forwards are looking at an uphill battle.