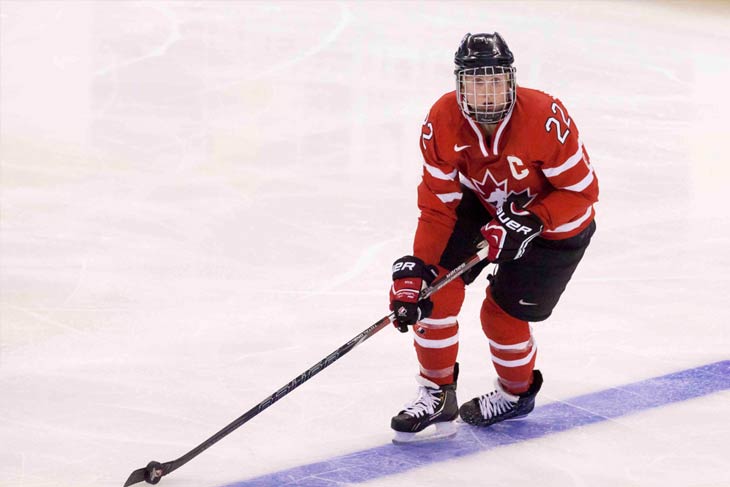 It’s safe to say this year’s inductees into the Hockey Hall of Fame don’t include any former NHL superstars but the list does include some solid players players and Stanley Cup-winners. Those who will be enshrined into the hall in Toronto on November 18th are Guy Carbonneau, Vaclav Nedomansky, Sergei Zubov and Hayley Wickenheiser as players along with Jerry York and Jim Rutherford as builders.

After being drafted 44th overall by the Montreal Canadiens in 1979, Carbonneau of Sept-Iles, Quebec, spent a couple of years in the American Hockey League and then proved to be one of the league’s finest defensive forwards between 1982 and 2000. He skated in 1,318 regular-season NHL contests with Montreal, the St. Louis Blues and the Dallas Stars and notched 260 goals along with 403 assists for 663 points. He also chipped in with 38 goals and 55 helpers for 93 playoff  points in 231 games.

Carbonneau, a center, was an exceptional two-way player and took home the Selke Trophy as the league’s best defensive forwards for his play in 1987/88, 1988/89 and 1991/92. The former Habs’ captain also has his name engraved on the Stanley Cup three times as he helped his teams win the silverware in 1985/86, 1992/93 and 1998/99. The first two cups were won with the Canadiens with the third coming as a member of the Stars.

Center and captain Haley Wickenheiser was a long-time fixture on the Canadian National Women’s Team and won medals at five different Olympic tournaments. This included four straight gold medals in 2014, 2010, 2006 and 2002  as well as a silver medal in Nagano, Japan in 1998. She was named the most valuable women’s player for her performances in Salt Lake City in 2002 and in Torino, Italy four years later.

Wickenheiser, who hails from Shaunavon, Saskatchewan and now works in the front office for the Toronto Maple Leafs, also won seven gold medals and six silvers at the Women’s IIHF World Championships and is the all-time scoring leader for the Canadian team with 168 goals, 211 assists and 377 points in 276 games played. She played with the national team for 23 years from 1994 until 2017, making her debut at the age of 15.

Back in 2003, Wickenheiser made history by becoming the first female to score a goal in a men’s semi-pro hockey league when she scored for third-division club HC Salamat in Finland.

Sergei Zubov of Moscow, Russia was one of the top blue liners in the NHL between 1992 and 2009. He started his career with CSKA Moscow in 1988 before being drafted in 1990 by the New York Rangers with the 85th overall pick. He played 1,068 regular-season contests with the Rangers, Dallas Stars and Pittsburgh Penguins with 771 points to his name in 152 goals and 619 assists. When he left the NHL in 2009 he was the all-time leading scorer for a Russian-born blue liner and now ranks second next to Sergei Gonchar.

Zubov, who was named to the NHL’s Second All-Star Team in 2005/06, was also a fine playoff performer with 24 goals and 93 helpers for 117 points in 164 postseason outings. He helped the Rangers win the Stanley Cup in 1993/94 and played with Carbonneau on the 1998/99 cup-winning team in Dallas. Internationally, Zubov took a gold medal home from the 1992 Olympics in Albertville, Canada.

Vaclav Nedomansky was born in the former nation of Czechoslovakia in 1944 and he made history years later by becoming the first hockey player to defect from a communist country in Eastern Europe to head to North America to play pro hockey. When he arrived in Toronto in 1974, Nedomansky joined the Toronto Toros of the old World Hockey Association (WHA).

He was already an established player after playing over a dozen seasons in his homeland and the center racked up 41 goals and 40 assists as a “rookie” for the Toros. He spent one more season with the franchise in Toronto and a full season with the Birmingham Bulls in 1976/77. Nedomansky started the next campaign in the WHA but after a dozen games he joined the NHL’s Detroit Red Wings. His WHA career consisted of 254 points in 252 games while he had already posted 354 goals and 534 points before that in 388 regular-season contests in Czechoslovakia.

Nedomansky played four seasons with Detroit and one each with the New York Rangers and St. Louis Blues before retiring in 1983 at the age of 39. He played 420 NHL contests with 121 goals and 156 assists for 277 points. He also chipped in with three goals and eight points in seven playoff encounters. Internationally, Nedomansky skated with Czechoslovakia in the 1968 and 1972 Olympics and played in several World Championship tournaments. He posted 80 goals and 119 points in 93 games with the Czechoslovakian national team..

Jim Rutherford, the current general manager of the Pittsburgh Penguins, is the only NHL GM to win a Stanley Cup with more than one team since the league’s first major expansion in 1967/68. The 70-year-old from Beeton, Ontario won the championship with the Carolina Hurricanes in 2005/06 as well as the Penguins in 2015/2016 and 2016/2017. The former NHL goalie was also named the league’s General Manager of the Year for 2015/16.

As for Jerry York, the 73-year-old hails from Watertown, Massachusetts and is a former NCAA college coach. He coached in the league for 47 years overall with 25 of them coming at Boston College. He also spent 15 years at bowling Green and seven years with Clarkson. He’s the all-time wins leader in American college hockey with 1,067 and is one of just three NCAA head coaches to win national championships with two schools. He won the title in 1983/84 with Bowling Green and then went on to capture four more with Boston College in 2000/01, 2007/08, 2009/10 and 2011/12.