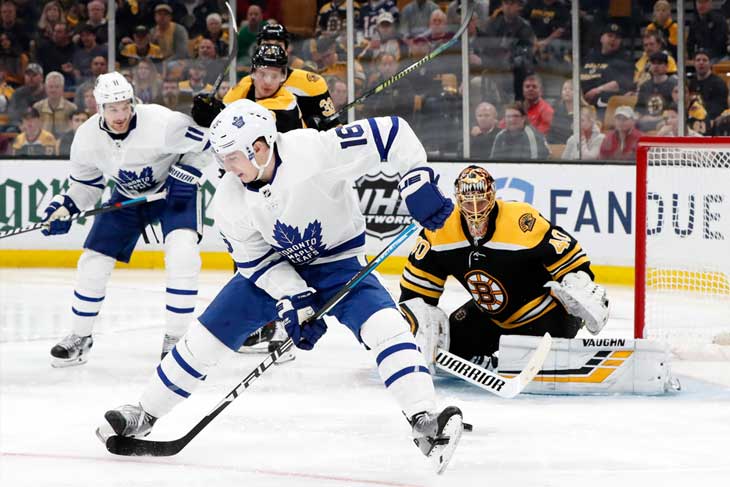 It finally happened: One of Toronto’s prodigal sons returned to his roots.

Former New York Islanders captain John Tavares spurned his longtime club for his hometown, signing a seven-year, $77 million deal with the Maple Leafs in free agency to instantly turn a promising yet raw squad into a title contender. It now boasted a three-headed monster up the middle with Tavares, Auston Matthews and Nazem Kadri, play-driving wingers in Mitch Marner and William Nylander, great production from the back end via Morgan Rielly and Jake Gardiner, and a legitimate starting goaltender in Frederik Andersen.

Of course, Nylander’s contract negotiations bled into the start of the regular season, but there was nevertheless electricity in the air. Leafs fans, who haven’t sniffed a Stanley Cup victory since the late ‘60s, felt as though they were about to witness something special.

The players shared that enthusiasm early on, storming out to a 26-10-2 record (2nd) by late December on the strength of a spectacular attacking onslaught. Even though Kadri (44 points in 73 games) seemed out of sorts on the third line, the team was positively terrifying on offense. Marner (94 points in 82 games) and Tavares (88 points in 82 games) quickly built chemistry alongside top-tier grinder Zach Hyman (41 points in 71 games). After 38 games, Marner had posted 53 points and Tavares was sitting on 26 goals. The 22-year-old’s uncanny ability to mystify defenders was magnified by a proven finisher as his center. Hyman, for his part, did what he always does: hustle his tail off. Though he’s out of his element with the puck on his stick, he’s a tremendous asset when it comes to establishing a forecheck and extending shifts on offense. On the year, the trio owned 53.6% of the shot attempts, 56.5% of the scoring chances, 56.8% of the high-danger opportunities and 60.9% of the goals scored at 5-on-5.

That’s about as stellar it gets, yet opponents also had to worry about Matthews (73 points in 68 games). While Nylander wasn’t there to provide superb zone entries and feathery dishes, there’s a reason his pivot has been the single best even-strength scorer in the world since he entered the league. His release is downright absurd and constantly evolving, as goaltenders can’t get a read on how pucks are flying off his stick. Moreover, it was leveraged by a significant change in deployment. For the first time in his career, he was granted a spot on the top power play unit. With Tavares, Marner, Matthews, Kadri and Rielly (72 points in 82 games) on the ice all at once, there were too many threats for penalty-killers to keep track of. Marner is incredible at finding seams, Tavares is deadly in tight and Matthews’ wrister is unparalleled.

The Leafs weren’t playing particularly sound hockey, but they were armed with so much firepower that it might not matter.

Never tell Matthews the odds, massive goal for the #Leafs to shrink the #Bruins‘ lead to one. pic.twitter.com/Z0n36jH2ak

Unfortunately, the grind of a long season eventually took its toll. Matthews, who was sidelined by a shoulder injury in October-November, remained visibly hampered throughout the rest of the year. His engagement level in the corners was shockingly low by his standards and he wasn’t putting in the effort defensively. As such, his touches decreased and his pace plummeted from 120 to 70 points over the final 44 contests. His sluggishness also translated to a -19 rating over that span. With such a diminished version of Matthews on the ice, Nylander’s midseason return was far less celebratory than it should have been. The 23-year-old never got the ball rolling, ending the season with a mere 27 points in 54 games as he bounced between the second and third lines.

While Toronto’s underlying numbers actually improved down the stretch (52.9 CF%, 55.1 SCF%, 53.5 HDCF%), it committed too many blunders to operate as a well-oiled, two-way machine. In fact, it often generated offense at the expense of its defensive solidity. The difference was Matthews’ health status and Nylander’s slump removed a large portion of the Leafs’ potency. Opponents could thus focus more of their attention on stopping Marner and Tavares. Gardiner’s back injury didn’t help matters on the blue line. Andersen also struggled late, as his stats cratered (3.05 GAA, 91.1 SV%) at the worst possible moment.

On the whole, they couldn’t get away with their loose approach quite as easily anymore, registering a 20-18-6 record (20th) to close out the campaign. Their offense tapered off to 3.23 GPG, while their defense stumbled to 3.27 GAPG.

By the time the playoffs came around, the Leafs weren’t firing on all cylinders. Moreover, they were matched up against a very familiar opponent in the conference quarterfinals: the Boston Bruins. Bruce Cassidy’s men knew exactly how to handle Toronto. You can’t shut down its stars altogether, but you can certainly limit their output by protecting the house, leaning on them whenever possible and capitalizing on their mistakes. Let them hurt themselves.

That strategy worked to a tee. Despite five goals from Matthews, the Leafs fell in seven games as their season-long warts were exposed. The defense was a disorganized mess, Nylander was mired in a drought, veteran Patrick Marleau (37 points in 82 games) became a total millstone and Andersen still couldn’t seem to step up when it mattered most. Kadri’s short fuse once again hurt his team too, as his cheap shot on Jake DeBrusk got him suspended for the remainder of the series. Adding salt to the wound, head coach Mike Babcock refused to adjust his tactics. Chipping and chasing with the amount of talent he had at his disposal was just silly…yet the highly respected bench boss wouldn’t budge. His team would relinquish possession, regain it and surrender control over and over again, negating any possible waves of attack. The Bruins were often on the verge of being overwhelmed only for the Leafs’ scheme to bail them out in the end.

Babcock’s openness to change is up for debate, but general manager Kyle Dubas certainly wasn’t content to sit idle. After all, Toronto had been sent packing in the first round for the third straight year.

Kadri was dealt to Colorado for Tyson Barrie (59 points in 78 games) and Alex Kerfoot (42 points in 78 games). Nikita Zaitsev and Connor Brown were traded to Ottawa for Cody Ceci and Ben Harpur. Ron Hainsey and Tyler Ennis also joined the Senators in free agency. Marleau’s contract was such a boat anchor that Carolina required a first-round pick to absorb it.

Naturally, the headlines centered around restricted free agent Marner. Amid reports that he was looking for offer sheets and turning down contracts worth $11 million per year, there was very real concern that the playmaker wouldn’t suit up for the Leafs next season. He ultimately signed a six-year deal worth $65 million. Though many RFAs are agreeing to bridge deals and management would have surely preferred that too, Matthews, Tavares, Marner and Nylander are all locked in for at least five years. Any sort of contract drama moving forward will not involve the top dogs.

One player who will strive to inflate his value this season is Barrie, a pending unrestricted free agent with a history of terrific production from the back end. Given the amount of firepower around him — and perhaps even the chance to play on the top power play unit — he could certainly set career highs in 2019-20. No one will confuse the 28-year-old for a shutdown defenseman, but he offers a massive puck-moving upgrade on the right side and the best point shot on the club.

Ceci, who’s been hammered by tough usage and consequently posted dreadful numbers, should find life easier in a lesser role. The 25-year-old skates well and possesses a solid build (6’2”, 209 lbs). It’s up to the coaching staff to put him in a position to succeed.

Earlier in the week, Babcock suggested that Hyman and Travis Dermott will miss roughly 15 games due to injury to start the season. As such, competition at the bottom of the depth chart should be fierce. Spezza, Agostino, Shore, Aberg, Nic Petan, Jeremy Bracco, Frederik Gauthier, Matt Read, Trevor Moore and Mason Marchment will duke it out for the final few spots up front. On defense, first-rounders Timothy Liljegren and Rasmus Sandin will hope to impress. Martin Marincin, Kevin Gravel and Jordan Schmaltz are in the conversation as well.

This is unquestionably a deeper and faster team heading into 2019-20. If Barrie can settle into a groove, it might be more dangerous too. Marner’s under contract long-term, Nylander has a full summer to get up to speed, Matthews is healthy. There are several reasons for optimism…but let’s not get carried away just yet. Babcock remains at the helm and it’s unclear whether Toronto can reach the promised land by playing his way.

Coaching aside, the Leafs must also learn to pace themselves in order to gear up for the spring. This is a marathon — not a sprint.