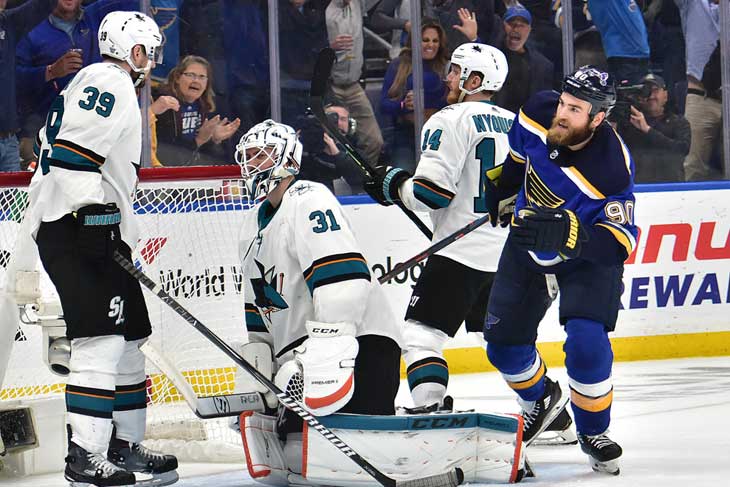 After dealing a bundle of futures to Ottawa in exchange for Erik Karlsson, expectations for the 2018-19 San Jose Sharks were sky high. This was a deep and fearsome club that put up a good fight against the Vegas Golden Knights in the second round, and it just added one of the greatest offensive defensemen in NHL history to a blue line that already featured Norris Trophy winner Brent Burns.

With that much talent, anything short of a Stanley Cup would be considered a disappointment.

It didn’t all come together immediately, though. Well, it very nearly did…only puck luck was giving the Sharks the cold shoulder early on. By December 1, San Jose was sitting on a 12-10-5 record (17th) despite controlling 55.7% of the shot attempts (2nd), 55.4% of the scoring chances (3rd) and 54.7% of the high-danger opportunities (6th) for a 56.2% expected goal share (2nd) at 5-on-5. Peter DeBoer’s squad was generating sustained waves of pressure and throwing the kitchen sink at opponents, but its actual GF% was a pitiful 44.2 (29th). While the team’s goaltending was predictably awful, San Jose was still playing well enough to overcome any issues on the back end. The main problem was its 26th-ranked shooting percentage.

Many clubs would have reached for the panic button, but San Jose’s management showed patience and perspective by staying the course. It believed that its roster was simply too gifted to see such mediocre results over the long haul. Karlsson was worlds better than his 15 points in 27 games suggested. Evander Kane would eventually find his bearings. Monster years for Tomas Hertl and Timo Meier had been brewing beneath the surface. The hot streaks were right around the corner.

This Timo Meier goal is so filthy we had to take a shower after watching it 👀 pic.twitter.com/oeprkRuTy5

From December 2 through the end of the campaign, the Sharks went 34-17-4 (7th) despite not changing a single thing about their system. They posted very similar possession numbers and kept creating a ton of glorious opportunities. Their goaltending remained at the bottom of the barrel as well. The sole difference was that their OISH% vaulted to first in the NHL over that span. That was precisely the type of finish they anticipated from the outset.

Though Burns (83 points in 82 games), Hertl (74 points in 77 games), Meier (66 points in 78 games) and Logan Couture (70 points in 81 games) started the season quite well and generally finished strong, a few key contributors took longer to get the ball rolling. Once they hit their stride, however, the offense became an unstoppable avalanche. Captain Joe Pavelski (64 points in 75 games) posted 43 points in his final 48 games. Karlsson (45 points in 53 games) regained his electrifying form with 30 points in 26 contests. Kane (56 points in 75 games) settled into his groove with 40 points in 48 games. Meanwhile, 40-year-old Joe Thornton (51 points in 73 games) discovered the fountain of youth to put up 42 points in 55 games. The veteran center’s production offered the Sharks impressive depth up front, as they could deploy Hertl, Couture and Thornton up the middle and enjoy substantial offense from three separate units.

On the back end, Karlsson’s momentum created matchup nightmares for opponents. As if Burns’ roving tendencies weren’t difficult enough to contain on their own, now San Jose could depend on a second minute-munching, game-changing blueliner. Both dynamos ranked in the top 12 among blueliners in shots, points and expected goals per 60 minutes. For two-thirds of the every game, the competition was forced on its heels.

All told, the club’s offense improved from 3.03 to a staggering 3.76 goals per game. That cushion was more than enough to compensate for Martin Jones’ (2.94 GAA, 89.6 SV%) slip-ups in the crease and the odd defensive miscue.

Following the trade deadline, there were plenty of reasons for optimism. General manager Doug Wilson acquired nifty winger Gustav Nyquist (60 points in 81 games) from the Detroit Red Wings to give DeBoer even more lineup options. Kevin Labanc (56 points in 82 games) was becoming a true difference-maker on the power play. Radim Simek emerged as the ideal foil for Burns’ wild style. Marc-Edouard Vlasic rebounded from a horrible couple of months to stabilize his pairing alongside Justin Braun. Since Karlsson had established a rapport with Brenden Dillon, San Jose’s defense was set.

There were still more hairy moments than a coaching staff would like, but that always constituted the trade-off for Burns and Karlsson’s incredible feats. Whether they were leading the breakout, jumping into the play or firing shots from the point, they granted the Sharks an unparalleled ability to manufacture something out of nothing.

Then an injury threw a wrench into San Jose’s designs. Simek’s season was ended by a torn ACL and MCL in mid-March, yielding an uncomfortable situation on the blue line. Together, he and Burns posted a 56.6 CF%, 53.1 SCF%, 57.1 HDCF% and 60.9 GF%. Without Simek, Burns’ puck dominance persisted, but his GF% dipped to 50.0 because he no longer had his partner’s stellar positioning and net-front coverage to lean on.

In the first round of the playoffs, the team’s explosive attack allowed it to edge out Vegas by the skin of their teeth. Revenge was sweet — and cruel given the ridiculous major penalty that kick-started a rally for the ages in Game 7. That same offensive potency carried the Sharks past the Colorado Avalanche in seven games. However, their third-round foe presented the worst possible challenge: St. Louis was riding even higher than San Jose down the stretch and would test the Sharks’ fortitude in the dirty areas. Without Simek on the top pair, their general distaste for defensive fundamentals was exposed and the Blues’ suffocating three-zone play reigned supreme. Craig Berube’s troops put the clamps on DeBoer’s and turned the series into trench warfare: They owned 53.1% of the high-danger chances and 58.3% of the high-danger goals. Over six games, San Jose averaged 2.50 goals per game while conceding 3.83.

“The referees cannot call what they didn’t see.”

A hand pass, unseen by the referees, gifted the San Jose Sharks the overtime game winner in Game 3 over the St. Louis Blues.

Once again, a deep and dangerous Sharks team couldn’t quite rise to the occasion. This time, playoff disappointment resulted in significant roster changes.

Pavelski signed with the Dallas Stars, offering the team greater depth and opportunistic scoring in tight. Energetic and responsible winger Joonas Donskoi joined the Avs and the team moved on from Nyquist, who eventually inked a deal with the depleted Columbus Blue Jackets. Joakim Ryan also ended up in L.A. On the trade front, Braun was shipped to Philadelphia for a couple of draft picks.

San Jose, for its part, focused its efforts on re-signing players rather than introducing new ones. Karlsson got an eight-year, $92 million extension, whereas Labanc accepted a shockingly low one-year, prove-it deal. Thornton will return for at least one more season too.

The Sharks are surely hoping Lukas Radil (11 points in 36 games), Antti Suomela (8 points in 27 games) and Dylan Gambrell (0 points in 8 games) can progress and fill some of the voids in the lineup. Alexander Chmelevski (2017 sixth-round pick), Ivan Chekhovich (2017 seventh-round pick) and Jonathan Dahlen (Ottawa’s 2016 second-round pick) will also look to push for roster spots. None of these prospects are necessarily blue chips, but the opportunity to cement a full-time role is there for the taking. Even one of them stepping up in 2019-20 would allow San Jose to spread the wealth and maintain its balanced attack.

Of course, no player comes with a guarantee. There’s every possibility that these kids aren’t ready to play in the NHL next season, which is fine on a developmental level but concerning in regard to the team’s title aspirations. Patience isn’t an option anymore. Thornton (40), Burns (34), Couture (30), Vlasic (32) and Karlsson (29) aren’t getting any younger. With its championship window shrinking fast, San Jose is entering now-or-never territory.