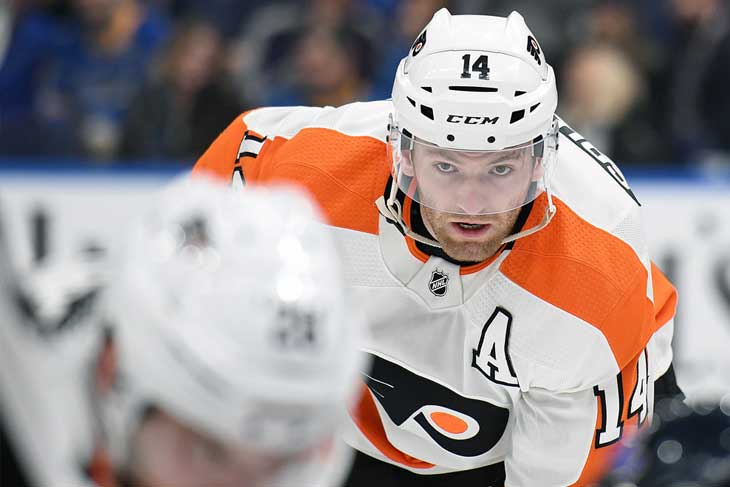 If any city understands the importance of goaltending, it’s Philadelphia. However, the Flyers are all too familiar with this concept because goaltending has often undermined rather than buoyed the team’s efforts.

Playing to your full potential is impossible when your netminder is lost in his crease. Defenses begin questioning their trust in the man behind them, whereas forwards become reluctant to take risks that might result in chances against. The club takes on its goaltender’s disposition: fragile, frazzled and just waiting for the other shoe to drop. That’s why a pretty decent Flyers squad has alternated between first-round exits and non-playoff seasons since 2012-13. When the stars have aligned, Philly has been able to mask its weakness in net with a potent attack or an opportunistic power play. When the offense hasn’t fired on all cylinders, its year would end early.

While those numbers weren’t great, they were palatable. The problem is the team ranked 28th in on-ice SV%, pushing its actual GF% down to 46.5 (21st). In a nutshell, Philly’s goaltending made the hill that much tougher to climb on a nightly basis. Unfortunately, 2018-19 was not one of those years when Philly could mount enough of a charge to conceal its woes in net. It was neither clinical on its chances nor dominant in possession. In the end, the Flyers finished 18th offensively and 23rd on the man advantage.

An anemic and predictable power play took a big bite out of the top guns’ production. Claude Giroux (85 points in 82 games) and Jakub Voracek (66 points in 78 games) were often far too wide on the flanks to pose credible one-timer threats, yet they insisted on forcing cross-ice seam passes to each other. Meanwhile, penalty-killers identified Shayne Gostisbehere (37 points in 78 games) as the main weapon in the middle of the ice. They took away his space and thus funneled the action toward the perimeter, resulting in low-percentage Hail Mary passes or harmless shots taken out of frustration. This severely limited Wayne Simmonds’ (27 points in 62 games) impact as a net-front disruptor. The power forward ranks third in power play goals over the past five years, but he mustered just five tallies in that situation last season. Gostisbehere’s production dropped by 19 points. Voracek’s fell by 17.

At even strength, the Flyers’ push from the back end was much weaker than in 2017-18 too. Ivan Provorov’s output was 12 points lower and Gostisbehere’s total went from 32 to 23. The blue line as a whole seemed hesitant to join the attack because of the team’s shaky goaltending. You couldn’t afford to falter for even a moment.

Those massive slides on the power play and in defensive scoring prevented a top-heavy club from vying for a postseason berth.

2017 second overall pick Nolan Patrick (31 points in 72 games) didn’t show significant progress over his rookie year. In fact, he actually performed worse by most metrics. He clearly possesses high-end vision and playmaking ability, but he hasn’t found a way to impose his will yet. His lack of explosiveness and pro strength is holding him back at the moment. Meanwhile, the wheels completely fell off for Simmonds. Whether his age caught up with his rough-and-tumble style or he had checked out in advance of free agency, the 31-year-old was a shell of his former self. He didn’t win as many battles in the trenches or assert his dominance in the crease. He was just kind of…there.

With that said, there were silver linings as well.

Along the blue line, Travis Sanheim (35 points in 82 games) emerged as a capable top-four rearguard. Philly took its sweet time with the 2014 first-rounder’s development, and that patience has paid off handsomely. The 23-year-old plays a smart and mature game, stays within his skill set, makes full use of his long reach and offers the team wonderful mobility on defense. He led the back end in even-strength scoring while putting up impressive underlying stats (49.8 CF%, 52.5 SCF%, 54.2 HDCF%, 52.0 xGF%). It’s always a good sign when a blueliner’s chance shares improve as the action inches closer to the slot.

And just as goaltenders sunk the club for half the season, the Flyers’ single biggest revelation in 2018-19 occurred between the pipes. Once head coach Dave Hakstol was fired in mid-December, interim replacement Scott Gordon turned to 21-year-old Carter Hart (2.83 GAA, 91.7 SV%) and handed him the lion’s share of the starts. He went 16-13-1 down the stretch, hinting at the possibility that Philadelphia could actually hang with the best when it receives quality play in the crease.

Hart’s performances weren’t necessarily earth-shattering, but the Flyers merely required a competent starting-caliber netminder — and he fit the bill nicely. He tracks the puck well, moves quietly from side to side and doesn’t appear to get flustered.

Ultimately, his promising displays arrived too late. Philly’s defense ranked 29th and the team missed the playoff cut by 16 points.

Thankfully, the organization has since taken several steps in the right direction. First and foremost, new general manager Chuck Fletcher selected Alain Vigneault as his head coach. Though the latter hasn’t guided a team to the promised land, he knows how to ice a competitive team overall. Vigneault made the playoffs in four of his five seasons with the New York Rangers, reaching the conference finals twice and the Stanley Cup Final once. That’s a solid resume. He should certainly do a better job than Hakstol and Gordon did in assembling a lineup that plays to its strengths.

To that end, Fletcher has brought in reinforcements. Most notably, he signed versatile forward Kevin Hayes to a seven-year, $50 million deal. The Flyers are surely hoping that the 27-year-old will remain motivated after his payday, as the 6’5”, 216-pounder scored a career-high 55 points last season. He can suit up at center or on the wing and absorb tough assignments, providing Vigneault with both familiarity and a wealth of options. Despite his hefty cap hit, he may be best suited for two-way responsibilities in order to free up the more offensively inclined pieces on the roster.

There are a few internal upgrades on the horizon too. Morgan Frost (2017 27th overall pick), Joel Farabee (2018 14th overall pick) and German Rubtsov (2016 22nd overall pick) must be licking their chops after watching the Flyers’ role players last season. Though they aren’t likely to all make the cut in 2019-20, any one of these youngsters would bring a welcome dose of offense to the bottom six.

On defense, Matt Niskanen was acquired in exchange for Radko Gudas. The team also picked up longtime San Jose Shark Justin Braun for a couple of draft picks. Both veterans suffered horrible years last season, but they could feel rejuvenated by their younger and hungrier partners. There’s a distinct possibility that Niskanen will play alongside Provorov in a shutdown capacity once the restricted free agent’s contract standoff is resolved. Niskanen filled that exact role in Washington as Dmitry Orlov’s foil, so there’s recent and relevant experience to fall back on. Meanwhile, Braun could help insulate Sanheim. That would afford Gostisbehere soft minutes with which he could wreak havoc on opponents. However the pairings shake out, the defense looks stronger on paper.

Of course, none of this will matter if Hart can’t carry his weight.

It’s no exaggeration to suggest that next season’s playoff hopes will hinge primarily on his play…and that’s a scary proposition. He’s still unproven and facing a ton of pressure in a city that hasn’t proven kind to goaltenders in the past.