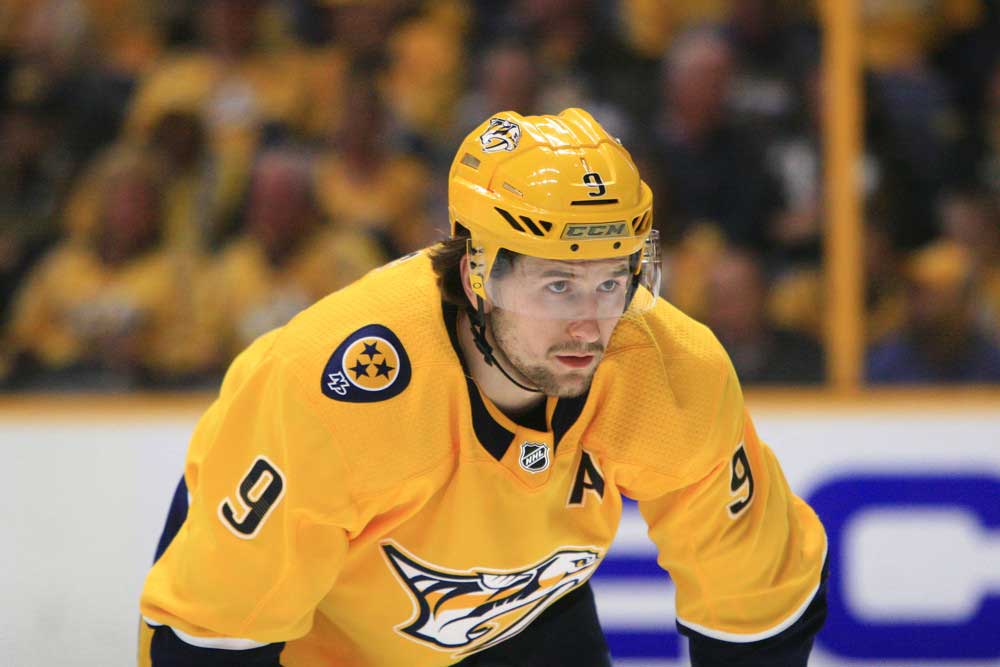 The Nashville Predators must be sick of merely knocking on the door. Since Peter Laviolette assumed head coaching duties five years ago, the team has made five straight playoff appearances, developed into a contender and even challenged Pittsburgh in the 2016-17 Stanley Cup Final…but it can’t seem to get over the hump.

When the chips have been down, its offense has consistently failed to step up.

Nashville was intent on breaking that pattern last season. Its attack wasn’t lethal by any means, but at least it was deep. 11 players reached the 30-point mark, which was tied for second in the NHL. The top line of Ryan Johansen (64 points in 80 games), Filip Forsberg (50 points in 64 games) and Viktor Arvidsson (48 points in 58 games) was as dangerous as ever and would have made even more of an impact if not for injury problems. Johansen’s patience and vision act as perfect foils for Forsberg’s high-octane style and Arvidsson’s nose for the net. Beyond them, Craig Smith (38 points in 76 games) boasts a dangerous shot and Nick Bonino (35 points in 81 games) and Colton Sissons (30 points in 75 games) provided secondary scoring in addition to sterling defensive work.

How Filip Forsberg continues to do this, we will never know. pic.twitter.com/8Qx4IxlFvn

Captain Roman Josi (56 points in 82 games), Mattias Ekholm (44 points in 80 games), Ryan Ellis (41 points in 82 games) and P.K. Subban (31 points in 63 games) formed an imposing top four on defense that granted Laviolette matchup flexibility and a considerable push from the back end. Josi is among the very finest defensive play-drivers in the world, displaying terrific speed and confidence with the puck. It’s no surprise then that he led all blueliners in scoring chances and high-danger opportunities last season. Subban is equally bold but less effective. The solo magic he flashed in Montreal has slowly dwindled with each passing year in Nashville. Nevertheless, his point shot remains deadly and he still conjured occasional moments of dazzling skill. Opponents simply couldn’t ignore his presence on the blue line.

Ellis and Ekholm are quieter in their approach, but they’re more judicious in deciding when to jump up and supplement the offense. Both are terrific at sealing the boards on clearing attempts and keeping plays alive for their forwards. As a result, the Preds could win on volume rather than pure firepower.

This quartet also spearheaded the team’s fourth-ranked defense. While Josi and Subban have their warts, they’re generally solid defenders in their end. Moreover, they’re partnered with steady veterans who know how to get out of a jam. Despite a 5’10”, 180-pound frame and a junior reputation built around prolific offense, Ellis has evolved into a smart, dependable and versatile rearguard who can hold his own against top competition.

Meanwhile, Ekholm emerged as the club’s best two-way defenseman last season after flying under the radar for years. He compensates for a slight lack of speed with spotless positioning. The 29-year-old shows a great understanding of when to press the issue and when to pull back, and whether he’s trying to extend plays for the offense or stymie opposing forwards, the 6’4”, 215-pounder deploys his long reach to his advantage. Even though he received the second-toughest zone starts among Preds blueliners, his hockey sense and discipline allowed him to lead the back end in shot (54.0%), chance (52.9%) and high-danger chance shares (52.5%) while finishing third in goal share (57.0%). Considering his production, that’s about as good as it gets.

In between the pipes, 36-year-old Pekka Rinne (2.42 GAA, 91.8 SV%) performed reasonably well and backup Juuse Saros (2.62 GAA, 91.5 SV%) offered at least average-level showings to ensure that there wasn’t too steep of a drop-off on Rinne’s nights off. The Finnish duo combined to rank fifth in the league in even-strength SV% (92.8). Goaltending may not have fueled the Preds’ success, but it rarely cost them either.

Nashville’s balance up front and on the blue line propelled the club to the top of the Central Division standings. However, there was cause for concern. At 5-on-5, the team posted a 52.2 CF% (7th), 51.1 SCF% (14th) and 50.3 HDCF% (16th) for a 51.1 xGF% (11th). Those are decent stats on the whole, but the Predators’ grip over proceedings weakened as the action inched closer to pay dirt. Since you must be able to control the trenches in the playoffs, that was a serious chink in their armor.

Another red flag was the power play. Despite quality personnel, the man advantage ranked dead last in the NHL. There was no conductor, as Josi dashed in and out of the frame, Subban stood in place waiting to unload a one-timer and Forsberg and Arvidsson seemingly improvised from shift to shift. Johansen was the best bet to rally the troops, but the pass-first center would often position himself so close to the blue line that he removed himself from the equation as a shooting threat. Since he was unlikely to take matters into his own hands, penalty-killers could sag off him and focus their attention exclusively on shutting down passing lanes. All of a sudden, the man advantage didn’t seem so…advantageous.

None of those moves panned out.

Laviolette couldn’t summon the younger and hungrier Simmonds, as the 30-year-old mustered three points in 17 games with his new club. There was a reason he had “buyer beware” written all over him. Boyle had little to no impact on the bottom six, producing low-event hockey and a 46.1 GF% in a defensive role.

In the end, however, Granlund’s inability to settle into a groove doomed Nashville’s season. The talented Finn was enjoying a superb year in Minnesota, combining good production (49 points in 63 games) with a three-zone prowess that seemed tailor-made for the Predators. Once he arrived in Nashville, though, his confidence plummeted. Playing primarily with Kyle Turris, who already looks washed up at age 30, Granlund just couldn’t get the ball rolling. He would often dish the puck to Turris and never see it again, as plays would simply die on the center’s stick. He ultimately produced just five points in 16 contests while faring quite poorly in shot and chance shares.

While the team’s offense seemed much better on paper, its chemistry was out of whack and its output actually dipped from 2.98 to 2.47 goals per game.

Nashville was ripe for an upset, and it came as early as the first round. The 47-29-6 Preds were sunk by their longtime scoring issues and a stingy Dallas Stars squad that limited them to 2.00 goals per game. Laviolette’s power play didn’t find the back of the net a single time over six contests. Without enough sources of offense on hand, Nashville abandoned its fundamentals in a frantic search for goals that wouldn’t come.

Winning your division and then being tossed aside in the conference quarterfinals is surely a bitter disappointment, but a few roster changes have improved the Predators’ outlook. Subban was shipped to New Jersey for 24-year-old defenseman Steven Santini and futures. He and 2016 first-round pick Dante Fabbro will battle for the chance to play alongside Ekholm. Subban had grown inconsistent both offensively and defensively, so Nashville was wise to move on from the 30-year-old with younger options while freeing up $9 million in cap space.

That room was immediately taken up by free agent center Matt Duchene. The 28-year-old pivot may take some time to adjust to his surroundings, but he scored 70 points in 73 games last season and provides the club with a proper dynamic duo up the middle. The Preds addressed an area of dire need and their legitimate top six will prove crucial in the spring when frauds are exposed. Though Duchene was slow to find his bearings in a stricter environment with the Columbus Blue Jackets, when the intensity ramped up in the postseason, he rattled off 10 points in 10 games. That’s the kind of production Nashville has sorely missed in recent years.

Elsewhere, the team moved on from Simmonds, Boyle and bottom-sixer Ryan Hartman. That opens up a spot for 20-year-old Eeli Tolvanen to justify the hype. The winger was once touted as one of the best scorers outside the NHL, and while he didn’t set the world on fire in the AHL last season (35 points in 58 games), his skill is undeniable. Deploying him in on the third unit could allow the Preds to ease him in while extracting some positive value from Turris’ ice time.

Regardless of his line configurations, Laviolette has far more options and firepower at his disposal. With a new-look offense to complement its stout defense, Nashville is hoping to avoid the same old underachiever story in 2019-20.