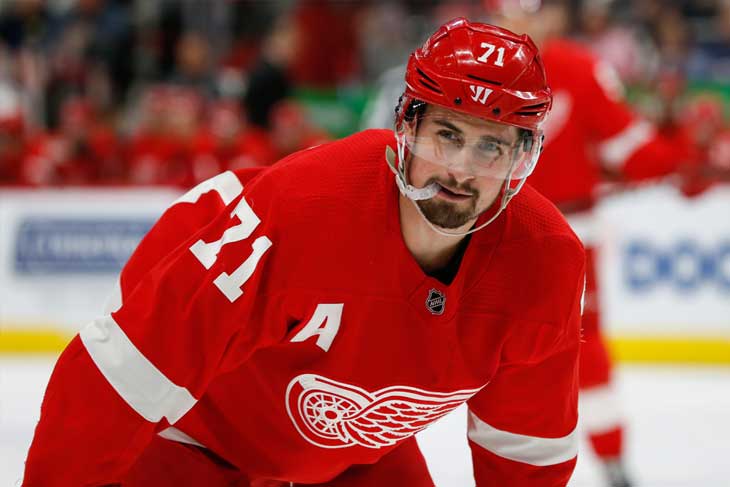 The beginning of a rebuild is never pretty. For the Detroit Red Wings, who reached the playoffs in 25 consecutive seasons and won four Stanley Cups between 1990-91 and 2015-16, the struggles may feel even tougher to swallow. Detroit had grown to expect success.

It’s a very different picture these days. The Red Wings haven’t made the postseason since two-way phenom Pavel Datsyuk left the team three seasons ago and few clubs carry as much dead weight on their roster. Beyond Dylan Larkin (73 points in 76 games), former general manager Ken Holland didn’t construct much of a succession plan. Moreover, the draft lottery hasn’t been particularly kind to Detroit. Despite finishing 25th, 27th and 28th in the league over the past three years, the team’s highest pick has come in at sixth overall.

Hey, how about this Dylan Larkin kid? pic.twitter.com/ZbxQEyUNrA

Head coach Jeff Blashill isn’t completely absolved of blame of course, but…what could anyone accomplish with this personnel?

The Red Wings were predictably awful last season, posting a 32-40-10 record that directly aligned with their play. At 5-on-5, they controlled just 47.1% of the shot attempts (28th), 46.0% of the scoring chances (29th) and 43.8% of the high-danger opportunities (30th). A decent on-ice shooting percentage (16th) and save percentage (15th) were the only reasons why their 45.4% goal share (26th) was a touch higher than their league-worst 44.5% expected GF%. Unless you’re lucky enough to ice superstar talent, you won’t get away with those numbers. There was no great equalizer in Detroit, so horrible performances yielded horrible results.

With that said, there were a few positive developments up front.

Larkin’s emergence as a bona fide star is the most notable. The 22-year-old obliterated his previous career high in goals with 32 and truly seized the reins on a forward corps that was screaming out for leadership. He was no longer Henrik Zetterberg’s understudy. The speedster looked as assertive as he ever has, setting new personal milestones in shot, chance and high-danger chance rates. With that increased confidence, his blistering pace and soft hands became a nightmare for opponents to handle.

Better yet, he welcomed the challenge of stifling their stars as well. Blashill saddled him with tough matchups and he shone bright on a lousy squad. Among forwards with at least 1,000 minutes played at even strength last season, Larkin ranked first in relative CF%, second in relative SCF%, seventh in relative HDCF% and third in relative xGF%.

As one of the most dangerous forwards around in open space, Athanasiou used his incredible wheels and finishing ability on the rush to produce his first 30-goal campaign. There’s no telling if he can replicate those contributions in a more structured setting, but his output on a squad that doesn’t score much otherwise is invaluable. Though Mantha isn’t necessarily flashy, he possesses a well-rounded offensive skill set that complements Larkin’s game nicely. Their shot and chance shares are much stronger when they’re together and he’s learned how to use his 6’5”, 225-pound frame to his advantage, shielding the puck not with brawn but sheer reach.

Andreas Athanasiou turns on the jets and dangles for the @MonroeShocks Play of the Week! #LGRW pic.twitter.com/fVyybpJS6I

Bertuzzi was perhaps the most pleasant surprise of the season. Whether it was in the corners or in front of the net, the scrappy winger simply wanted it more than the man next to him. He extended play after play along the wall and fooled a number of goaltenders on deflections, which isn’t shocking when you consider that 55% of his shots and 91% of his goals occurred in the slot. Those rates are both much significantly higher than the league average. His ability to keep up with top-tier players in addition to creating a stir in the trenches is a luxury for any team.

If we’re reaching for silver linings, Gustav Nyquist (49 points in 62 games) also saved his best season in a half-decade for a contract year and positioned himself as an intriguing rental. San Jose took the bait and handed Detroit a pair of draft picks for his services.

It gets ugly after that.

Gifted winger Thomas Vanek (36 points in 64 games) is precisely the wrong type of player to surround your top guns with on account of his total aversion to three-zone hockey. The journeyman, who was on his eighth NHL club and in his second stint with the Red Wings, was simply coasting to a paycheck. Frans Nielsen (35 points in 72 games) does care about his end of the ice, but the 35-year-old is already five years past his prime. During his shifts, Detroit would essentially just turtle up and hope for the best: 44.5 CF%, 42.9 SCF%, 41.0 HDCF%, 42.1 xGF%.

This lack of support from the bottom six held the team’s offense back, as it finished 21st (2.73 GPG) despite several breakout campaigns.

Furthermore, it placed the defense behind the eight ball. That was especially worrisome because the personnel back there was either raw or downright bad. One of Detroit’s better pure defenders, Nick Jensen, was dealt to Washington for Madison Bowey and a fifth-rounder. Bowey has all the tools, but the toolbox remains elusive. He jumps up at inopportune moments and frequently loses inside leverage on his man. In his 17 games with the Red Wings, the 24-year-old registered a defense-worst 38.9 SCF%, 32.3 HDCF% and 36.9 xGF%. That’s…one way to make an impression.

Among the veterans, Mike Green (26 points in 43 games) and Jonathan Ericsson (5 points in 52 games) appear to have checked out. Trevor Daley (8 points in 44 games) has lost the step that made up for his occasional slip-ups. Niklas Kronwall (27 points in 79 games) was virtually unrecognizable as a 38-year-old. The experience that was meant to spearhead this back end led it straight into the gutter.

On the flip side, Danny DeKeyser (20 points in 52 games) is a competent rearguard who quietly goes about his business. While he shouldn’t be anyone’s No. 1 defenseman, his active stick and good hockey sense amounted to a 54.4 GF%. 21-year-old Filip Hronek (23 points in 46 games) displayed serious confidence and a trigger-happy nature, frequently leaping into the attack and unleashing lasers on net. Dennis Cholowski (16 points in 52 games) is another youngster who could make a case for joining the team’s core group moving forward. Puck luck was unkind to him (lowest OISV% on the defense), but he showed good instincts and mobility.

While there are building blocks there, they were very much unpolished in 2018-19. They suffered growing pains and were not helped whatsoever by the underperforming elder statesmen. As a result, Detroit conceded 3.32 goals per game (27th).

Looking ahead, a familiar face inspires hope for the future. Red Wings legend Steve Yzerman has come home to assume GM duties and guide his team out of the dumpster. Tampa Bay has repeatedly fallen short when it mattered most, but at least in the regular season, his Lightning have become a juggernaut. There’s a ton of depth and star power on their roster — and most of it stems from savvy draft picks and patient development.

That’s great news for a team that will hang its hat on its youth movement.

Nyquist is in Columbus, Vanek is likely gone as well, Kronwall may retire. All of this should allow Detroit to focus its efforts on grooming the greener players into true difference-makers. College star Taro Hirose (7 points in 10 games) looked promising late in the year, Hronek and Cholowski should earn full-time gigs along the blue line, and Filip Zadina (2018 6th overall pick), Joe Veleno (2018 30th overall pick), Evgeny Svechnikov (2015 19th overall pick) and Jared McIsaac (2018 36th overall pick) are waiting for their opportunity.

Yzerman has also brought a couple of solid veterans into the fold. Former Red Wing Valtteri Filppula (31 points in 72 games) should improve the bottom six and mentor 2017 ninth overall pick Michael Rasmussen (18 points in 62 games), who boasts a massive 6’6”, 221-pound frame and showed glimpses of potential. Meanwhile, Patrik Nemeth (10 points in 74 games) provides defensive depth and a proven knack for protecting his house. In terms of insulation, that’s a start.

Success won’t happen overnight for the Red Wings and the grind will be ugly at times, but it finally seems like they’ve stopped treading water.

There’s progress in the air.