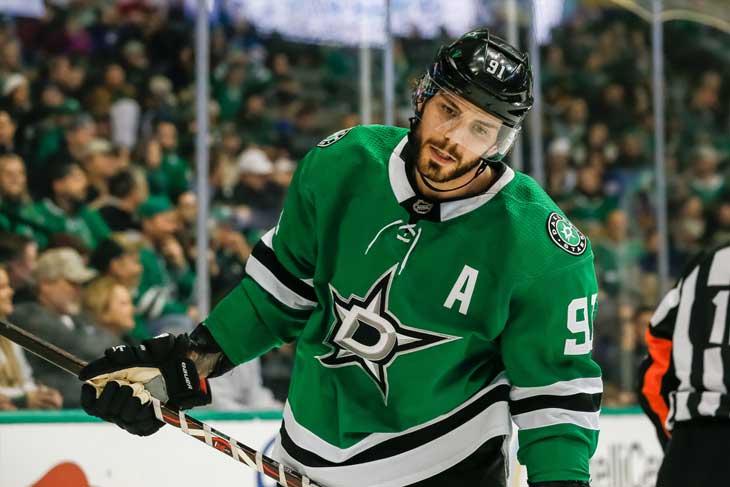 Short of winning the Stanley Cup, the most satisfying feeling for head coaches must be getting their players to actually buy what they’re selling. Merely icing a nice collection of skill isn’t going to cut it in the playoffs when all the contenders boast lineups ranging from solid to utterly stacked. In order for a team to reach its peak, its bench boss has to construct the right identity for his group and his troops need to fully embrace it.

As odd as it sounds, the Dallas Stars did just that in 2018-19. Sure, they fell in the second round to the eventual champions from St. Louis, but Jim Montgomery couldn’t have possibly fared better in his first year at the helm.

He quickly assessed the personnel on hand: This wasn’t a team that would skate circles around its opponents. It just didn’t possess that kind of firepower. Tyler Seguin (80 points in 82 games), Jamie Benn (53 points in 78 games), Alexander Radulov (72 points in 70 games) and John Klingberg (45 points in 64 games) are quality offensive pieces, but their presence alone wouldn’t justify a free-flowing scheme. Since there were three other forward lines and a couple of other blue line pairings to consider, Montgomery didn’t try to force a square peg into a round hole. Instead, he designed a defense-oriented system that anyone could execute if they put in the work.

It probably wasn’t as simple as “win in the trenches,” but that’s how it played out. Despite their modest attack, the Stars posted a 19-16-3 record (16th in the league) by late December because they only grew more effective as play moved toward the greasy areas. At 5-on-5, Dallas controlled just 46.0% of the shot attempts (29th) and 47.4% of the scoring chances (25th) but 50.9% of the high-danger opportunities (14th). Instead of hopelessly trying to dictate the action, it was learning how to bend without breaking.

However, the club’s CEO didn’t seem to recognize this progress. On December 28, Jim Lites went on an explosive rant aimed at Benn and Seguin. His top guns weren’t producing enough offense for his liking, but that was never going to be the case under Montgomery. Rather than letting those silly remarks get under its skin, Dallas as a whole doubled down on its new identity and delivered a defensive masterclass over the next 44 games. The team went 24-16-4 (12th) in that span and clinched a wild-card spot precisely because Benn, Seguin and their teammates kept their eyes on the prize. There was no cheating for offense. They didn’t care about their personal statistics. They were powered by diligent team defense, brilliant goaltending and a patient counterattack.

That hyper-focus translated to better numbers across the board: 50.2 CF% (14th), 53.1 SCF% (7th), 54.6 HDCF% (6th). In addition to establishing a bit more control over proceedings, Dallas enjoyed superb performances between the pipes. Ben Bishop played out of his mind down the stretch, as the Stars went from averaging 2.68 goals allowed per game to 2.23 following Lites’ tirade. They led the league in on-ice save percentage and high-danger SV%, and Bishop paved the way with a 1.65 GAA (1st) and 94.5 SV% (1st).

In essence, the Stars reached the postseason by improving in every area but the offense.

They generated the lowest GF60 and GA60 in the league from late December through the end of the season, imposing low-event hockey on opponents and waiting for them to slip up due to frustration. If they let their guard down for a second, that top line could make them pay. On the blue line, Klingberg and Miro Heiskanen (33 points in 82 games) could supplement the offense without compromising themselves defensively. The standout rookie changed the back end’s complexion, as he logged over 23 minutes of ice time per game on the second pairing while bringing tremendous pace and confidence with the puck.

When you can make opponents work for every inch of ice at even strength, hold your own on the penalty kill (9th down the stretch) and convert on the power play (7th), you’re in great shape.

Dallas carried that momentum into a first-round matchup against the Nashville Predators. The Stars were seemingly outgunned, but they once again hunkered down in the trenches (50.8 HDCF%, 61.5 HDGF%) and exposed the Predators as paper tigers. Bishop posted a 1.90 GAA and 94.5 SV%, while Benn, Seguin, Radulov and Klingberg all produced at a point-per-game rate. Trade deadline pickup Mats Zuccarello, who suffered a broken arm that limited him to two regular season contests with his new squad, chipped in three goals and provided wonderful depth throughout the six-game series.

In the conference semifinals, the Stars nearly pulled off a similar feat against another balanced opponent. St. Louis controlled just 45.0% of the high-danger bids, but it managed to own 53.8% of the high-danger goals because it was much grittier and more opportunistic than Nashville in the dirty areas. That dip in close-quarters effectiveness, accentuated by inconsistent showings from Bishop (2.50 GAA, 92.2 SV%), granted St. Louis a razor-thin edge: Dallas ultimately fell in double overtime of Game 7.

That’s tough. It’s also an incredible result for a roster that didn’t seem primed for a playoff run. The players believed in Montgomery’s vision and reaped the rewards in a season when expectations were rather low.

Management has followed suit by signing a couple of proven finishers (Joe Pavelski, Corey Perry) as well as an experienced two-way defenseman (Andrej Sekera). That should offset the loss of Zuccarello to free agency. Moreover, it should crystallize Montgomery’s philosophy: Dallas may not run many opponents out of the rink, but its ability to survive and then quickly create scoring opportunities has been enhanced by Pavelski and Perry’s history of net-front effectiveness. Both veterans can regularly be found sniffing around the slot for tips and rebounds, and Sekera’s addition should provide Montgomery with three pairings that can move the puck well and get shots through traffic.

There are reasons for optimism beyond the team’s signings too. Heiskanen looked poised beyond his years in his first NHL campaign, displaying wonderful speed and assertiveness while remaining collected in all situations. He managed to top his regular season with an even better playoff showing, which bodes well for his sophomore year. Perhaps the most notable part of his performance is that he accomplished this with Roman Polak — a career black hole by most metrics — as his most frequent partner.

Heiskanen may receive some help in that regard next season. Stay-at-home defenseman Stephen Johns, who missed the entire 2018-19 campaign with post-traumatic headaches, has been skating and could eventually return to shore up the right side of that second pairing. His presence as a safety net would allow the kid to do what he does best: play with pace.

Up front, 22-year-old Roope Hintz (22 points in 58 games) emerged as a dependable utility player who can complement the top six. He carries a sturdy frame (6’3”, 215 lbs), has deceptive speed and posted stellar underlying numbers (49.6 CF%, 53.0 SCF%, 55.8 HDCF%, 52.8 xGF%). 24-year-old Jason Dickinson (22 points in 67 games) is starting to come into his own as a responsible forward as well. On the flip side, wildly disappointing forwards Valeri Nichushkin (buyout) and Brett Ritchie (signed by Boston) are no longer on the team. Their departures open the door for 2015 first-round pick Denis Gurianov and 2017 second-round pick Jason Robertson to provide much-needed internal competition.

No matter how it shakes out, this roster is considerably deeper than last season’s.

A good year has made a world of difference. With the whole organization now behind Montgomery, Dallas has shifted gears and entered a full-on title push.