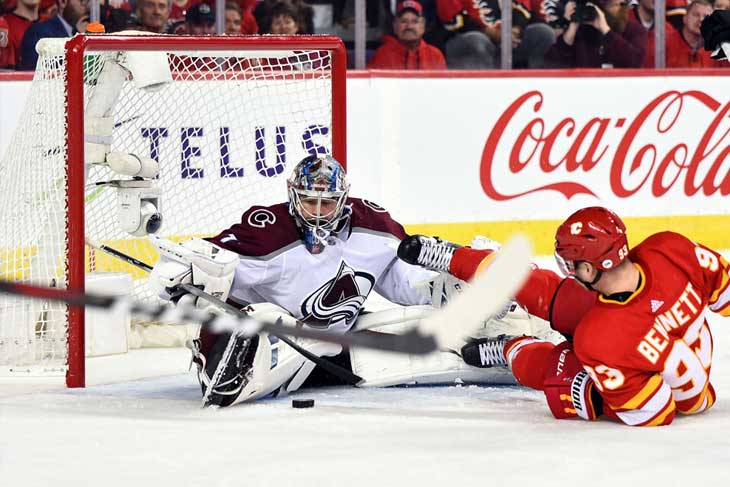 Entering the 2018-19 season, the Colorado Avalanche were a young and exciting club…for 20 minutes a night. Nathan MacKinnon, Mikko Rantanen and Gabriel Landeskog combined to form one of the most electrifying and effective lines in hockey, but when they returned to the bench, their teammates provided very little assistance.

Could the Avs strike a bit more balance up front? Not really.

The “one-line team” label stuck for good reason, as that unit single-handedly carried the team to a scorching-hot start to the year. In late November, Colorado was sitting on the fifth-best record in the NHL (15-6-4) because it had lit the lamp 3.80 times per contest. Rantanen was leading the entire league in scoring with 42 points, whereas MacKinnon was just a point behind. They were both scoring at a higher rate than Nikita Kucherov’s 82-game pace — and the Hart Trophy winner just authored the finest offensive season since Mario Lemieux in the mid-1990s. Meanwhile, the captain had snuck into the top 15 as well with 28 points in 25 games. With slick playmaking, pure explosiveness and impressive finish, the trio was must-watch television.

Since they only possessed one true scoring line, their lofty conversion rate was never going to hold up over a full season. MacKinnon and Rantanen’s attacking burden was far too heavy and their declining output as the year progressed is a testament to that.

All in all, the first line still offered Colorado a terrific campaign. MacKinnon (99 points in 82 games) delivered a second straight MVP-caliber year, Rantanen (87 points in 74 games) put up a second consecutive point-per-game season and Landeskog (75 points in 73 games) reached that threshold for the first time in his career. Better yet, the unit dictated the action during its shifts: 54.7 CF%, 54.6 SCF%, 49.4 HDCF%, 61.3 GF%. Those are wonderful numbers that reflect their ability to direct the play toward the opposition’s zone and keep it there.

But three players can only prop an impotent group up for so long. In a stark contrast, the rest of the squad owned 47.0% of the goals scored at 5-on-5.

Once the top unit’s production dipped to a less ridiculous level, there was no one else on hand to grab the baton. Beyond Tyson Barrie (59 points in 78 games) on the back end, Carl Soderberg (49 points in 82 games), Alex Kerfoot (42 points in 78 games) and J.T. Compher (32 points in 66 games) led a supporting cast that simply wasn’t up to snuff. Colin Wilson (27 points in 65 games) wasn’t making much of an impression and 2016 10th overall pick Tyson Jost (26 points in 70 games) still didn’t look ready for the pro game.

That dire lack of secondary scoring and a blue line that didn’t move the puck particularly well meant that the team spent far too much time defending. Without the right personnel to collapse and counterattack, this was bad news for the Avs. From November 29 to February 22, they went 11-18-7 (28th) and squandered their playoff berth.

Then a miracle happened: Philipp Grubauer saved their season.

The 27-year-old career backup earned head coach Jared Bednar’s trust, receiving 13 of the team’s final 21 starts. Colorado was 9-2-2 in those outings and Grubauer posted absurd numbers (1.44 GAA, 95.6 SV%), including the second-best GAA and save percentage in the league over that span. It’s not like the Avs simply regained their stride either. Incumbent starter Semyon Varlamov closed out his year with a 3-4-1 record, 3.29 GAA and 89.8 SV%.

No, Grubauer simply found his groove at the perfect time. Colorado roared back into the playoff picture just as several Western Conference teams hit a wall, practically begging the Avs to overtake them in the race.

They happily obliged, and once they entered the dance, a number of depth pieces rose to the occasion. Sure, Rantanen and MacKinnon totaled 17 points in the first round, but Matt Nieto and Wilson produced four each and Compher scored a pair of goals. To make matters worse for the Flames, college phenom Cale Makar debuted for the Avs midway through the series. The 20-year-old is dynamic and shockingly confident with the puck, wheeling and dealing as though the NHL postseason was just another walk in the park. That new offensive dimension from the blue line was too much for Calgary to handle, as the heavy favorites bowed out in five games.

Next up were the San Jose Sharks. Peter DeBoer placed Brent Burns on MacKinnon duty, and the hulking defenseman did well to at least limit the center’s production (5 points in 7 games). More importantly, San Jose forced Colorado’s top line to defend and hurt it with an opportunistic attack. Throughout the second round, MacKinnon, Rantanen and Landeskog were a combined minus-14 in seven games.

The forward support from the conference quarterfinals did not translate to the semifinals. Nieto and Compher produced at a far lower rate, whereas Soderberg and Derick “Big Game Brass” Brassard each put up one point in the series. The Sharks isolated the Avs’ Achilles heel, daring them to find offense beyond MacKinnon’s line.

They couldn’t. Colorado averaged 2.57 goals per game and ultimately lost the seventh and deciding contest 3-2.

That narrow defeat will sting for a while, but general manager Joe Sakic was aggressive in his offseason pursuit of scoring depth. He shipped Barrie, Alex Kerfoot and a sixth-round pick to Toronto for gritty center Nazem Kadri, depth defenseman Calle Rosen and a third-rounder. He also signed speedy two-way winger Joonas Donskoi and took a flier on Washington Capitals forward Andre Burakovsky. Sakic then signed Pierre-Edouard Bellemare to add a touch of defensive reliability to the fourth line. On the flip side, he moved Soderberg to Arizona in order to free up some cap space that will be required to re-sign restricted free agents Rantanen and Compher.

The former’s contract is obviously a huge piece of business for Sakic to handle, but Colorado’s acquisition of a legitimate second-line center makes the team deeper ahead of the 2019-20 season.

Better yet, management has seemingly built this roster with modern hockey in mind. MacKinnon’s line is as explosive as it gets. The bottom six has gotten quicker. Barrie is only in Toronto because Sakic selected another puck-mover (Bowen Byram) fourth overall. Even if he needs another year or two of seasoning, the Avs have Makar and Samuel Girard ready to force the issue from the back end. Makar, in particular, can redefine the team’s identity with his high-end talent and penchant for joining the attack. He showed immense potential on the biggest stage and his coach would be wise to leverage the youngster’s best qualities.

Colorado is no longer a likable underdog. It’s pushing for a place among the contenders in the West. In order to get there, it has to push the pace.