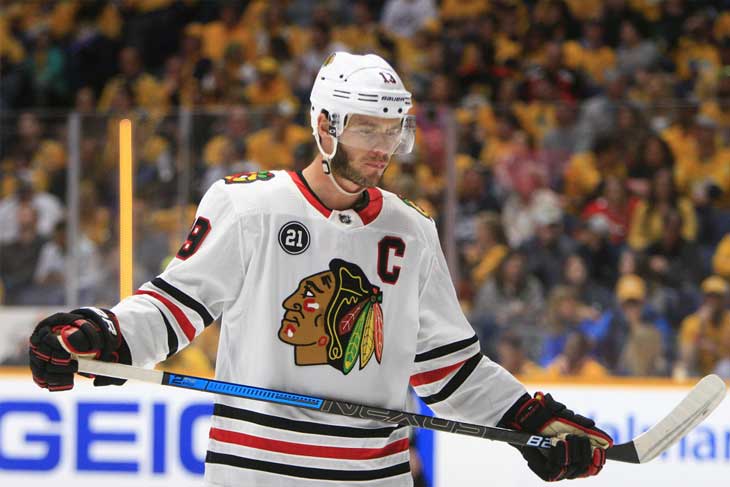 After a decade of misery beginning in the late 1990s, the Chicago Blackhawks rebuilt, grew into contenders and ultimately won three Stanley Cups in the span of six seasons. Patrick Kane, Jonathan Toews and Duncan Keith each took home a Conn Smythe Trophy, establishing themselves as the faces behind this resurgence.

But there’s always more to a title — let alone three — than the headliners. Depth is essential. It’s also incredibly difficult to maintain when you’re in a championship window. Players price themselves out of the picture and those departures leave gaping holes in a previously stacked roster. It’s no coincidence that Chicago’s recent banner years are surrounded by early exits in the playoffs. A salary cap squeeze wreaked havoc on a Blackhawks organization that hasn’t reached the second round since its last championship in 2015.

Longtime head coach Joel Quenneville was fired in early November as the club was sitting on a 6-6-3 record. He was replaced by 34-year-old Rockford IceHogs (AHL affiliate) bench boss Jeremy Colliton, who couldn’t turn the tide early on.

As such, general manager Stan Bowman decided it was time for a shake-up. He sent inconsistent center Nick Schmaltz to Arizona for unproven forwards Dylan Strome and Brendan Perlini. At first blush, the Coyotes were getting the better player in the present, but Strome had the higher upside. He was selected third overall in the 2015 draft for a reason. Once Colliton paired him with former OHL linemate Alex DeBrincat, he showed off that dormant potential. All of the timidity that defined his time in Arizona was washed away by their deep-rooted chemistry. Strome no longer had to stop and think about where his linemates would be. He just knew now, and that freed him up to trust his instincts and unleash his skill. He racked up 51 points in 58 games with the Blackhawks, while DeBrincat improved on his 28-goal rookie year with a whopping 41 markers.

A savvy deal had delivered Chicago a brand-new second line. Colliton could now tinker with his lineup, which is why we saw more of Toews and Kane together than we had in ages. Needless to say, the results were scintillating. Kane erupted for a career-high 110 points (3rd in the league) in 81 games and Toews set a high-water mark of his own with 81 points in 82 games.

Offense is only one part of the equation, though.

While Bowman did well to reunite junior partners Strome and DeBrincat in order to balance out of the attack, he failed to address the blue line. Chicago’s attack went from producing 2.71 goals per game to 3.48 following the deal…but it was allowing opponents to score 3.62 times a night. That’s tough to overcome for any offense — especially an opportunistic one like Chicago’s. The Blackhawks weren’t dictating the action. They were merely making the most of their chances.

In a nutshell, Chicago did not play good hockey last season.

On the back end, Keith (40 points in 82 games) is 35 years old and no longer able to carry the load by himself. He remains a quick and elusive blueliner, but his unique style was always going to hamper him in the later stages of his career. Few defensemen are as aggressive in their gaps, and that high-risk, high-reward approach isn’t paying off as handsomely anymore. He simply can’t cover as much ground as he used to, which is granting opposing stars the time and space to pick apart an otherwise porous Chicago squad.

Unfortunately, 27-year-old Erik Gustafsson was the only rearguard to provide him with any support. The 2012 fourth-round pick had shown glimpses of serious talent, but no one expected 60 points (6th among NHL defensemen) in 79 games. He logged 22:35 of ice time per contest and performed better than the team average in every significant underlying metric.

The drop-off after that was massive. 34-year-old Brent Seabrook is an albatross at this point, controlling virtually none of the play and seldom flashing his stay-at-home dependability. 6’4”, 212-pounder Connor Murphy has all the tools, but his toolbox is questionable. He was absolutely dreadful at protecting his house (39.3 HDCF%) last season. Jan Rutta was dealt to Tampa Bay. Brandon Manning was so bad that he was traded to Edmonton and then demoted…by the Oilers.

Granted, 20-year-old rookie Henri Jokiharju (12 points in 38 games) showed promise alongside Keith. He’s a poised and willing shooter and the pair did about as well as you could hope given Chicago’s roster construction: 53.8 CF%, 52.9 SCF%, 45.0 HDCF%, 47.6 xGF%. He was ultimately sent down to Rockford, though, which only further highlighted the team’s need for competent defensemen.

Overall, this was a group that struggled to move the puck out of its end and was utterly scattered in coverage. It’s hardly surprising, then, that the Blackhawks conceded the most high-danger chances and expected goals in the NHL last year. As the cherry on top, they ranked dead last on the penalty kill.

With that said, there is cause for optimism. Bowman has been hard at work in the offseason, making a number of moves in hopes of maximizing the club’s chances while Kane and Toews are still leading the charge. Most importantly, he finally bolstered the blue line — particularly the left side — by bringing in Calvin de Haan and Olli Maatta. The former is a 28-year-old veteran whose steadiness will fit in perfectly on the second pairing. It’s worth noting that he underwent offseason shoulder surgery and may not be ready for training camp. The latter has seemingly been around forever, but health problems derailed an auspicious start to the 24-year-old’s career in Pittsburgh. He’s a tad slow both with his feet and how he processes the game, but a change of scenery could be just what the doctor ordered.

On the flip side, Bowman traded Jokiharju to Buffalo for Alex Nylander. The right side of Chicago’s defense needs work and shipping a quality RHD prospect out for a boom-or-bust 21-year-old is…risky. Nylander hasn’t exactly set the world on fire in the AHL (31 points in 49 games), but the 2016 eighth overall pick could slowly work his way up the ladder if Chicago is patient with him.

Elsewhere, former Blackhawk Andrew Shaw is coming back home after a short albeit successful stint in Montreal. The 27-year-old is a versatile and fiery competitor who’s coming off the best year of his career (47 points in 63 games). His edge and net-front presence can complement the top six, but he could certainly anchor the bottom six as well.

In between the pipes, Bowman signed Robin Lehner (2.13 GAA, 93.0 SV%) to a one-year deal. This should stabilize Chicago in net while providing the 27-year-old with an opportunity to prove that last year’s numbers weren’t strictly due to Barry Trotz’s brilliance in Long Island.

We’ve seen the lean years sprinkled between titles in Chicago. Lately, reaching the postseason at all has become a challenge.

Thankfully, the current roster feels noticeably different. It isn’t stacked like in 2010, but it’s been restocked. There’s balance. Toews and Kane look revitalized, Strome and DeBrincat will be eager to show they’re the real deal as a duo and Shaw and Brandon Saad are ideal glue guys. This should allow Perlini (15 points in 46 games) to continue his progress without any pressure. Meanwhile, recent pick-ups Nylander and John Quenneville are knocking on the door waiting for their big break.

On defense, De Haan and Maatta should lighten Keith’s burden, whereas Gustafsson will look to declare that he’s no flash in the pan. Finally, Lehner will shore up a leaky situation in the crease. Even if he can’t match his 2018-19 performance, he’ll have trouble doing worse than Chicago’s revolving door in net.

With a full offseason at his disposal, Colliton must cultivate a clear identity for his squad and devise the right scheme for it to control more of the action.

It’s too soon to tell whether the Blackhawks are playoff contenders once more, but Bowman’s additions in every phase of the game have ensured that — just like last season — this core group won’t go down without a fight.