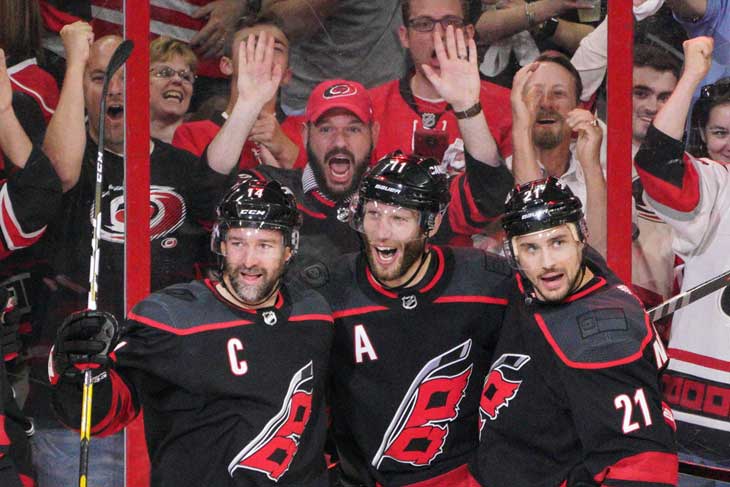 In all honesty, head coach Rod Brind’Amour couldn’t have hoped for a better inaugural season at the helm of the Carolina Hurricanes.

Heading into 2018-19, they were expected to slot in somewhere between rebuilding club and bubble team. Carolina ultimately posted a 46-29-7 record to clinch its first playoff berth in a decade and proceeded to shock two heavy favorites (Washington Capitals, New York Islanders) on its road to the conference finals. It was then swept by the Boston Bruins, but this campaign still signaled the rebirth of Canes hockey.

As odd as it sounds, Brind’Amour may feel grateful that his squad’s progress was slow at first. The Canes had to embrace his vision in order to enjoy the fruits of their labor. They had to learn how to play the right way — and the right way is seldom the easy way. Without a wealth of star power to rely on, there were no undeserved wins. The transition from also-rans to live dogs in the East was the result of total commitment and unparalleled work ethic.

That’s about as sturdy a foundation as you can lay down in your first season behind the bench.

Despite little cooperation from the win-loss column (22-19-5), Carolina played terrific hockey right from the outset. Its furious, everything-but-the-kitchen-sink approach was a nightmare for opponents to handle. From opening night through January 17, it controlled 55.1% of the shot attempts (2nd), 55.0% of the scoring chances (3rd) and 56.0% of the high-danger bids (2nd) at 5-on-5. The Canes imposed their tempo and tilted the ice toward the opposition’s cage. However, mediocre goaltending and a lack of finish up front prevented their actual goal share (48.2%) from matching their expected one (56.1%).

It was an ideal fit…and the results soon reflected that match made in heaven.

Paired up with franchise center Sebastian Aho (83 points in 82 games), Niederreiter reached a new level of production (30 points in 36 games) while their line put up spectacular underlying metrics: 58.6 CF%, 58.4 SCF%, 57.7 HDCF%, 61.9 GF%. Carolina now had a big-bodied and talented winger to complement its young star, and the chemistry was undeniable. This acquisition also allowed Brind’Amour to construct lines that didn’t ask certain players to play out of their depth. Third-liners were now on the third unit rather than floundering higher up.

The upgraded offense went from scoring 2.69 goals per game prior to the deal to 3.30 from that point forward. That is an absolutely massive spike — and it’s not like it came from some unsustainable shooting percentage. The team’s on-ice SH% rose from a league-worst 6.3 to a middling 8.3 (12th). That’s it.

When you dictate as much of the play as Carolina did, an average conversion rate is enough to generate a playoff-caliber attack.

The most impressive part? Brind’Amour’s squad could bombard its opponents without ever compromising its structure. It conceded just 2.42 goals per contest down the stretch. On the strength of sheer pace and unwavering three-zone responsibility, the Canes could apply a full-court press and then settle into their defensive posture in one fell swoop.

Slavin, Brett Pesce and Calvin de Haan deserve a ton of credit for their sound positioning and solid instincts. It’s no happy coincidence that these three consistently disrupt the opposition’s designs. Though De Haan is just steady all-around, Pesce sticks out because of…his stick. The 6’3”, 206-pounder may boast the single best poke check among NHL defensemen, making full use of his reach and smarts to push opponents into unfavorable situations. Meanwhile, Slavin displays jaw-dropping recovery speed to cast a wide defensive net. That’s particularly useful because Hamilton — for all his offensive contributions — is occasionally a sieve on the defensive end. De Haan and Pesce were often there to cover for Faulk’s slip-ups too.

A rejuvenated offense, stout defense, decent goaltending and top-tier coaching: The Canes had the makings of a real upset threat, and they obliged by topping the Washington Capitals in double overtime of Game 7. In the second round, they turned the tables on the New York Islanders after they had ousted Pittsburgh in four outings.

It was never quite smooth sailing, but that’s precisely why the Canes were so daunting. Throughout the entire season, they played as though nothing would be handed to them. They were shaped by adversity and built to take on all comers.

Well, except for the Bruins.

Boston’s phenomenal defense, goaltending and opportunistic offense paid off against a relatively green Carolina team. Bruce Cassidy’s troops didn’t need to dominate the puck. They sat back, waited for the slightest sign of weakness and pounced once it presented itself. Whether it was at even strength or on the man advantage, Boston showed an uncanny knack for capitalizing on its chances. In the end, the Canes got rattled and the Bruins went right for the jugular. Big-game experience was the primary factor that separated the men from the boys.

By that same token, Carolina just gained some of that experience. That’s incredibly valuable for a young core that hopes to grow and thrive together.

With that said, there have been a few roster tweaks in the offseason. De Haan was shipped to Chicago, Waddell traded for Vegas Golden Knights center Erik Haula and backup goaltender Curtis McElhinney signed with the Tampa Bay Lightning. Unrestricted free agent Micheal Ferland is likely gone as well. None of these developments will alter the club’s identity, although it will miss De Haan’s reliable nature. 2014 seventh overall pick Haydn Fleury or 2016 13th overall pick Jake Bean must assert himself as a mainstay on the left side. Up front, Haula will provide a boost to the bottom six. His 29 goals in 2017-18 were likely an aberration, but he should show a nice mix of speed and steadiness up the middle.

23-year-old Warren Foegele will try to carry his breakout playoff (9 points in 15 games) into 2019-20, whereas 20-year-old Martin Necas could make the jump to the big leagues following a wonderful year in the AHL (52 points in 64 games). The 2017 first-rounder’s vision and skill could elevate the third unit and allow the Canes to deploy a more balanced attack.

The Canadiens have announced that they have tendered an offer sheet to restricted free agent Sebastian Aho of the Carolina Hurricanes. The proposed contract is for five years, with an average annual value of $8.454 million.#GoHabsGo

While teams would prefer longer term for their young stars, his contract provides great bang for Carolina’s buck and grants Waddell a lot of wiggle room for potential upgrades. If the team is a buyer at the trade deadline, the only issue will be finding the right piece.

There is one significant question mark, though.

Williams hasn’t announced whether he is retiring or re-signing with the club. The 37-year-old remains a solid contributor and respected leader. If he chooses to hang up his skates, someone like Aho, Slavin or perhaps Staal will need to grab the reins and keep the team marching in the right direction.

Overall, this past season validated the club’s new vision. It may not have the flashy names, but it can keep up with any team through its will, fearlessness and a system that leverages what the players bring to the table.

Better yet, Brind’Amour is the conductor of the pack. The former Cane is known for his diligence and surely recognizes that there’s still work to be done. The coaching staff must improve the power play (20th), management could stand to add another impact forward and the young players must take it upon themselves to push even harder as they prepare for another arduous season.

From the top on down, the Hurricanes simply have to stay hungry.