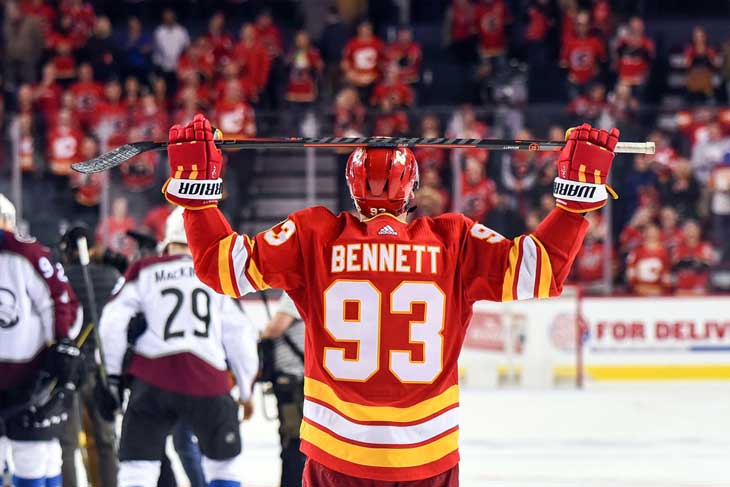 Despite how it ended, the 2018-19 Calgary Flames produced a memorable season. In their first year under head coach Bill Peters, they clinched the top seed in the Western Conference and earned their first division title since 2005-06. They also hit the 50-win threshold for just the second time in franchise history and looked every part of a Stanley Cup contender.

This wasn’t a squad eking out wins on the strength of opportunism. Calgary steamrolled its opposition through and through with crisp puck movement and the ability to generate offense both on the rush and the cycle. Peters’ club routinely dictated the play and had the talent to reap the rewards. Up front, an offseason swap paid massive dividends. Versatile newcomer Elias Lindholm (78 points in 81 games) completed a revamped top line alongside Sean Monahan (82 points in 78 games) and Johnny Gaudreau (99 points in 82 games), and the trio delivered banner years across the board. Monahan reached career highs in goals and points, Lindholm topped his highest single-season total by 33 points and Gaudreau flirted with the century mark.

With his craftiness, vision and open-ice elusiveness, Gaudreau is the conductor. Monahan is the reliable finisher, while Lindholm is a jack-of-all-trades who can adapt to any situation. That amounted to one of the very finest scoring lines in hockey.

One step below that unit, Matthew Tkachuk (77 points in 80 games), Mikael Backlund (47 points in 77 games) and Michael Frolik (34 points in 65 games) formed a wonderful two-way line that could match up with and often outplay star-caliber opposition. 21-year-old Tkachuk continued his progression as a top-tier power forward, becoming a net-front monster on the power play while putting up more even-strength points in 2018-19 than total points in either of his previous two seasons. That’s a massive leap in production.

Buoyed by Backlund and Frolik’s defensive conscience, the group performed remarkably well against stiff competition: 59.2 CF%, 58.4 SCF%, 56.6 HDCF%, 67.4 GF%. In short, whoever they faced was in for a long night.

It was a special year on the back end too. 35-year-old captain Mark Giordano (74 points in 78 games) took home the Norris Trophy following a sensational campaign that saw him dominate at both ends of the ice alongside TJ Brodie (34 points in 79 games). The duo shut top lines down and added timely offense to boot. Giordano has a great read on when to activate and certainly isn’t afraid of pressing the issue once he gathers a head of steam. Overall, the pairing always seemed in control of proceedings, and the stats bear that out: 57.7 CF%, 56.3 SCF%, 53.9 HDCF%, 59.8 GF%.

Noah Hanifin (33 points in 80 games), the second part of that blockbuster offseason deal with Carolina, paired up nicely with Travis Hamonic (19 points in 69 games) on the second pairing. The 22-year-old still has his warts, but he appeared more comfortable as a Flame insulated by a steady veteran. Both are big-bodied rearguards who skate well, although Hanifin is the fluid puck-mover to Hamonic’s stay-at-home rock.

Calgary’s goaltending provided a pleasant surprise as well. After veteran Mike Smith (2.72 GAA, 89.8 SV%) struggled early in the year and relinquished his post as the starter, undrafted 26-year-old David Rittich (2.61 GAA, 91.1 SV%) took over and posted a 27-9-5 record. He’s far from established and his performance dipped in February and March, but his contributions to the team’s success were invaluable. If the Flames hadn’t stabilized in the crease to some degree, they may not have locked up home ice advantage in the playoffs.

Fueled by a terrific top six and two great pairings on the blue line, this team finished third in the league standings. Of course, that level of success raised expectations through the roof. The mood shifted from a feel-good story to a pressure-packed environment in which a Canadian city suddenly had its sights set on a championship.

The Colorado Avalanche took just five games to knock the Flames out of the first round, skating circles around the heavy favorites for much of the series. Though Colorado boasted an up-and-coming squad, Peters’ club was vastly superior on paper. Calgary was a juggernaut dispatching one opponent after the next. It was almost too easy at times…and perhaps that was to their detriment. With the wins racking up and not a trace of adversity to be found, the Flames were never forced to dig deep and fight their way off the ropes. By the time the playoffs rolled around, they hadn’t cultivated the killer instinct required to prevail.

With either an unproven Rittich or a shaky Smith tending the twine…that was never going to end well.

This total team breakdown is difficult to explain. First and foremost, the top dogs can’t seem to perform under the bright lights. Calgary was going to go as far as Gaudreau, Monahan and Tkachuk could carry them, and thus far in their careers, they’ve floundered in the playoffs. Few star forwards appear as bothered by the increase in physical play as Gaudreau, who no longer has the time and space to comfortably dissect opposing defenses. Monahan is a good center, but his production is heavily reliant on Gaudreau’s elite playmaking. When that dries up, their line is very, very quiet. As for Tkachuk, he loses his focus a bit in the postseason and isn’t surrounded by the sort of impactful linemates who can correct the team’s course.

Elsewhere, the bottom six is a clear weakness. James Neal (19 points in 63 games), who’ll earn $5.75 million per year until 2022-23, is a liability when he isn’t scoring — and he didn’t do much of that in his first season with the Flames. Mark Jankowski (32 points in 79 games) doesn’t do much of…anything, really. Calgary reached for him in the first round of the 2012 draft because of a high offensive ceiling, yet he’s been deployed as a defensive center to mediocre results. What is he exactly? Neither the Flames nor the player know what to do with this 6’4”, 212-pound frame.

The team also lost Garnet Hathaway in free agency. Though he’s mostly a grinder, he’s an effective one whose energy and grit in the corners will be missed.

Apparently, the Flames have already tried to upgrade their forward corps. TSN’s Bob McKenzie reported that they nearly landed Nazem Kadri in exchange for TJ Brodie before the former Maple Leaf was dealt to Colorado. That would have been huge for Calgary, giving Tkachuk a more gifted center to work with while pushing Backlund down to a cozy 3C spot where he could devote his efforts to stingy defensive play.

That didn’t pan out and the club’s biggest offseason move to date was replacing Smith (Edmonton) with Cam Talbot. The Flames also have to take care of business with a couple of restricted free agents (Tkachuk, Sam Bennett). On the youth front, Dillon Dube and Juuso Valimaki could earn regular spots next year.

Otherwise, the 2019-20 roster will be similar to last season’s. As such, it’s on Peters to get the most out of his players when it counts. From the top line down to the blue-collar worker bees, they have to find another gear in order to transition from paper tiger to legitimate beast. Even if they’re winning, they can’t afford to coast on autopilot. They can’t develop bad habits and believe they can bail themselves out on a whim. Colorado just drove that point home in the conference quarterfinals.

Peters must now deliver a crucial message of his own: No matter how high you sit in the standings, there is always room for improvement.