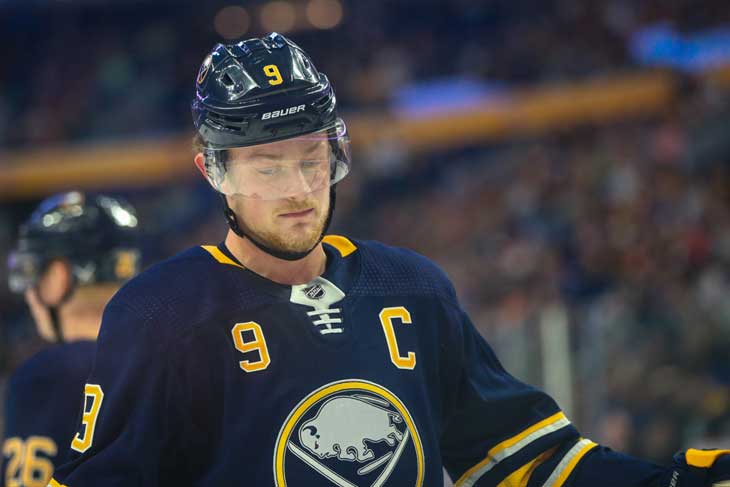 For a minute there, the Buffalo Sabres had many believing they were the real deal. They were sporting a league-best 17-6-2 record in late November and appeared ready declare that the franchise’s suffering was over. After seven straight years without a playoff appearance, they were now poised to compete.

Then reality hit them like a ton of bricks, splitting 2018-19 into a tale of two seasons.

From November 28 through to the end of the campaign, Buffalo hit rock bottom by going 16-33-8 for the single ugliest record in the NHL over that span. The Sabres pulled off the inverse of St. Louis’ midseason turnaround, instead plummeting from first to worst in emphatic fashion. It all went wrong: Their offense petered out, opponents repeatedly carved up their defense and goaltending, and head coach Phil Housley didn’t have the faintest clue of how to right the ship.

The Sabres ultimately finished 13th in the Eastern Conference and a whopping 22 points outside of a playoff spot. That’s astoundingly bad considering the early cushion they had established on the field.

Their 52.7 GF% (11th) was largely due to a hot streak in the trenches. Through the first 25 games of the season, captain Jack Eichel had totaled 23 assists and newcomer Jeff Skinner had potted 19 goals. Virtually everything they touched turned to gold — and goals — as Buffalo ranked third in high-danger shooting percentage. Between the pipes, Carter Hutton and Linus Ullmark combined to produce the fourth-best high-danger save percentage (86.6) in the NHL. All told, their high-danger GF% (58.5) came in third despite neither possessing the personnel nor the coaching to be faring so well.

For your viewing pleasure — here are some of Jeff Skinner’s most memorable goals during his first season with the #Sabres @WKBW pic.twitter.com/wZ6TIKbj6u

They were simply playing far above their heads where games are won and lost. It was stunning and wholly unsustainable…and it showed over the remainder of the year.

Once Skinner and Eichel’s on-ice SH% dipped from 12.9 to 8.8, the team collapsed. Its dire lack of secondary scoring could no longer be ignored. The defense fell apart at the seams. Hutton and Ullmark came crashing back down to earth. From late November to the end of the season, the team scored 2.54 goals per game while conceding 3.51. Their underlying numbers actually improved (50.3 CF%, 50.1 SCF%, 49.5 HDCF%), but they felt the full brunt of their roster’s shortcomings. Their 16.2 HDSH% ranked 23rd and their 80.6 HDSV% ranked 27th, which amounted to a 43.6 HDGF% (26th). Overall, their 42.7 GF% was good for 29th in the league.

As constructed, this was a team whose results should have been poorer than their performance. The opposite was true early on, but the absence of scoring depth and Buffalo’s awful coaching were impossible to escape over the long haul.

Eichel still racked up 54 points in his final 52 contests, but Skinner’s production sputtered down the stretch (36 points in 57 games). Beyond their linemate Sam Reinhart (65 points in 82 games) and blueliners Rasmus Dahlin (44 points in 82 games) and Rasmus Ristolainen (43 points in 78 games), there was little offense to speak of. 2017 eighth overall pick Casey Mittelstadt (25 points in 77 games) hasn’t quite adapted to the pro game yet and Kyle Okposo (29 points in 78 games) is becoming a total millstone. His production for $6 million per year is nothing short of pitiful.

If Conor Sheary (34 points in 78 games), Evan Rodrigues (29 points in 74 games) and 36-year-old Jason Pominville (31 points in 73 games) represent your secondary scoring…you’re in a world of trouble. Without a legitimate top six that opponents must respect, the Sabres were placed on their heels for much of the campaign and just couldn’t get off the ropes.

That exposed their flaws on a nightly basis.

Ristolainen displays moments of absolute of brilliance, but while we’re sitting around waiting for them, he’s often getting pounded in shots and chances. Though he carries an imposing frame (6’4”, 215 lbs), skates well and is confident with the puck, his positioning and decision-making leave much to be desired. As a result, he doesn’t control enough of the action. His name has been attached to trade rumors this summer, but barring a significant return, the Sabres are unlikely to pull the trigger.

Rasmus Ristolainen scores a ridiculous goal and follows it up with an even better celly.

That’s our Play of the Night presented by @WendysCanada. pic.twitter.com/QYeFHwaOPS

Elsewhere, fellow blueliner Marco Scandella hasn’t looked like his Minnesota Wild self since arriving in Buffalo, and 2018-19 was especially rough. During his shifts, the Sabres posted a 46.4 CF%, 42.9 SCF%, 41.0 HDCF% and 40.7 GF%. Up front, Vladimir Sobotka is another veteran who bears no resemblance to his former self. In St. Louis, he was a fiery and effective two-way forward who could chip in offensively. In Buffalo, he’s retreated into a shell and gotten bombarded by the opposition. Owning a mere 35.9% of the high-danger chances is unacceptable.

Overall, the defense didn’t move the puck effectively and the team’s coverage was frequently scattered rather than tight and cohesive. Opponents attacked in extended waves that the Sabres just couldn’t stop.

When they did get possession, their lack of secondary scoring was glaring. Thankfully, it can only improve…right?

Mittelstadt will have one year of NHL experience under his belt and should display a better grasp of how to leverage his soft hands and playmaking ability at this level. The team also acquired Jimmy Vesey from the New York Rangers on Monday. The 26-year-old hasn’t set the world on fire in his three seasons, but he could flourish in a larger role with the Sabres. The 6’3”, 199-pounder is big, mobile and there is certainly untapped offensive potential there. The most surprising boom-or-bust proposition is Victor Olofsson, a 2014 seventh-round selection who’s quietly worked his way up the ladder. He showed promise in Sweden, tore up the AHL (63 points in 66 games) and then produced well (4 points in 6 games) in a short stint alongside Eichel and Reinhart to close out the year. Better yet, that line posted spectacular underlying numbers: 59.5 CF%, 68.7 SCF%, 72.4 HDCF%, 66.7 GF%.

While Buffalo obviously handed Skinner an eight-year, $72 million contract to ride shotgun on Eichel’s wing, Oloffson’s performance suggests he could provide a real spark there in spot duty or lower in the lineup. Any way you slice it, it’s an unexpected and wonderful development for the forward corps — especially since 2016 first-rounder Alex Nylander is taking his sweet time to fulfill his potential.

2019 seventh overall selection Dylan Cozens is another X-factor. Though big men usually take a little longer to reach their upside, the 18-year-old has great tools and could play his way onto the club with impressive showings in preseason.

The Sabres upgraded their blue line too. Brandon Montour was brought in late in the season to bring a puck-moving element to the back end. The 25-year-old remains inconsistent, but he’s unquestionably quick and gifted. In his 20 games with Buffalo, he put up very promising shot and chance shares for a 52.6 xGF%. The club then exploited the Vegas Golden Knights’ tight cap situation by trading for Colin Miller, a mobile and productive defenseman who loves to unleash lasers from the point.

Of course, Dahlin is entering his sophomore season after a year in which he showcased poise beyond his years. The 2018 first overall pick knows when to push forward and when to hold back and displays remarkable vision once he’s activated. One year of experience and another offseason to iron out the kinks should result in a scary No. 1 defenseman sooner rather than later.

We can confirm that Rasmus Dahlin is good at hockey.#WorldJuniors pic.twitter.com/aJSIH499fy

While none of these rearguards are shutdown artists, they should allow the team to spend more time attacking and thus less time defending. That’s half the battle.

Most importantly, the Sabres opted for a new voice behind the bench: Ralph Krueger. He just left his post as chairman for Premier League soccer club Southampton FC, so there’s no telling how he’ll adapt to the NHL in his first season back. However, he couldn’t possibly implement a worse structure than Housley’s willy-nilly system.

With a great first line and a possibly elite blueliner in the making, there’s a sturdy foundation here. If Krueger can develop the youngsters and tweak Buffalo’s tactics to tilt the ice more in its favor, the Sabres may finally turn the corner in 2019-20.