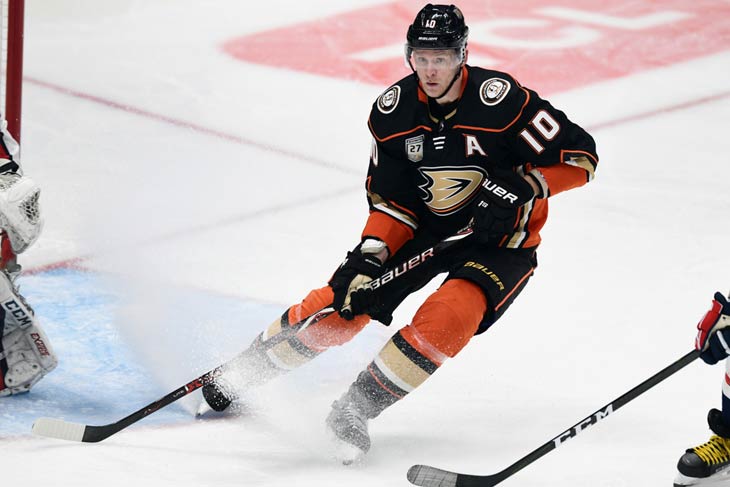 Goaltending can highlight the difference between a good team and a great team. Hell, it can represent the single biggest factor in a club’s championship pursuit. However, it’s seldom able to fuel an entire season on its own.

John Gibson (2.84 GAA, 91.7 SV%) certainly put in a valiant effort, though. Anaheim’s starting netminder was the only Duck to pull his weight in the early portion of 2018-19. From October through the end of December, he posted a 92.4 SV% on a team that ranked 27th in shot shares, 30th in scoring chance shares and dead last in high-danger chance shares. The only reason Anaheim mustered a 19-15-7 record was its league-best 93.8 on-ice save percentage.

In other words, it was Gibson vs. the world.

His spectacular performances between the pipes pushed an otherwise poor roster close to the postseason bubble before that burden finally got the best of him. His save percentage from January 1 to March 1 was a dreadful 88.9 (fourth-worst among goaltenders with at least 10 starts) and the team’s playoff outlook suddenly became as grim as Gibson’s MVP chances. Without superhuman displays in the crease, the Ducks stumbled to the worst record in the league (5-17-2) over that span. They finished 35-37-10, which was good for third-last in the Western Conference.

You simply cannot win with the ice so heavily tilted toward your net. This is no longer the dead puck era where you can ride out the storm indefinitely. With a few rule and equipment changes, offenses are now so high-powered that teams must push back in order to survive. Under Randy Carlyle, though, Gibson was the sole form of resistance.

Up front, injuries and an aging core conspired to hamstring the attack. Two-way center Ryan Kesler (8 points in 60 games) missed one-quarter of the season, and even when he was in the lineup, he looked like a shell of his former self. You can’t question his grit and desire, but his three-zone influence was virtually unrecognizable from merely two years ago. Reports suggest his recovery from hip surgery may sideline him for the whole 2019-20 season.

While there are better pieces around than a hobbled Kesler, no one can replace his heart-and-soul contributions.

Meanwhile, winger Corey Perry missed about 50 games with a knee injury. When he returned, he posted just 10 points in 31 games. An already slow 34-year-old had lost another step. Management wasn’t willing to find out if he could bounce back either, as Perry’s contract was bought out on Wednesday. The longtime Duck is now a free agent.

Elsewhere, up-and-coming scorer Ondrej Kase had his breakout campaign (20 points in 30 games) derailed by a torn labrum. Nick Ritchie (31 points in 60 games), who appeared to be fulfilling some of his potential as a power forward with offensive upside, missed 20 contests as well.

First career @Enterprise hatty for Ondrej Kase is in the books! 🙌 pic.twitter.com/rAOSWSrvhT

While Jakob Silfverberg (43 points in 73 games) and Rickard Rakell (43 points in 69 games) did well overall, the Swedes aren’t game-breakers. Who else was going to grab the reins? Adam Henrique? He’s as middle-of-the-road as it gets. Carter Rowney? Daniel Sprong? Kiefer Sherwood? Andrew Cogliano performed so poorly that he was traded for Devin Shore, who out-produced him by a hair once he landed in Anaheim.

Unfortunately, Carlyle’s system only worsened matters. The Ducks took an old-school approach to an ever-evolving game and never paused to adjust when the losses began to pile up. The attack felt lifeless and static, as though the players were merely going through the motions rather than moving the puck with purpose and creativity. That limited captain Ryan Getzlaf’s impact as a high-end playmaker. He would scan the ice for openings only to find teammates stuck in the mud. He led the club with just 48 points in 67 games.

Pairing lackluster personnel with an ultra-conservative scheme was the perfect recipe for a last-placed offense — and Anaheim obliged by mustering 2.39 goals per game.

As such, the Ducks’ defense was under fire the entire year. It’s not surprising then that it couldn’t hold up its end of the bargain, conceding an average of 3.02 goals per game (19th).

To be fair, Hampus Lindholm and Josh Manson did their part as responsible blueliners. They may not drive much offense, but they’re stout in their end. 2015 first-round pick Jacob Larsson was a nice surprise too, showing real poise and natural defensive instincts for a 22-year-old. He led the back end in HDCF% as well as expected goal share and should develop nicely if he’s brought along at a steady pace.

The rest of the blue line floundered in 2018-19. 27-year-old veteran Cam Fowler was easily the biggest disappointment on defense, falling below the team average in shot and chance metrics while failing to assume a leadership role on a team that sorely needed a galvanizing presence. Despite his effortless skating stride, he controlled much less of the action than he had in previous years. He did miss almost two months in the middle of the year with a facial injury, so perhaps he was just tentative down the stretch.

Marcus Pettersson and Brandon Montour were both dealt away. Jake Dotchin was a disaster who didn’t play a game after January 1, whereas Andy Welinsky was regularly pounded in scoring chances (45.3 SCF%) and high-danger opportunities (39.3 HDCF%).

Sloppy puck management and questionable depth amounted to poor breakouts throughout the campaign. It’s hard to generate much offense when you can barely exit your own zone. Again, the coaching staff stayed the course. It was like the Ducks were locked into a pattern they couldn’t shake. Going back to the same well does in fact yield the same results. Neither the defense nor the offense could cancel out each other’s shortcomings, which slimmed the team’s margin for error down to…Gibson’s performance. That’s it.

Thankfully, there is hope on the horizon.

At the very least, this will be a very different team in 2019-20. First and foremost, Carlyle was fired and replaced with San Diego Gulls head coach Dallas Eakins. Though he wasn’t blameless, the former Edmonton Oilers bench boss got a raw deal in his first stint at the helm of an NHL team. In all likelihood, he’ll try to put his stamp on the squad by altering its tactics to favor more puck possession and assertiveness.

That culture change should be met with an influx of youth too. There will be a fierce competition for the open slots up front, as 2016 first-rounders Sam Steel (11 points in 22 games) and Max Jones (5 points in 30 games) will look to cement full-time positions after seeing a good amount of action last season. The former is a crafty and reliable center, whereas the latter is a power forward with untapped potential.

2017 50th overall pick Max Comtois (7 points in 10 games) was quite impressive in his cup of coffee with the big club, but he did benefit from a ridiculous 20.5 on-ice shooting percentage. At any rate, he’s a big-bodied, dynamic power forward who could fit in nicely in the top six.

Then it gets interesting.

2018 23rd overall pick Isac Lundestrom appeared in 15 games with the Ducks and could steal a spot in preseason. He certainly has the wheels to keep pace with the pros — now it’s a matter of refining his game away from the puck. Anaheim also boasts three of the top 40 picks (9th, 29th, 39th) in Friday’s draft. While none of them should be expected to make the cut immediately, there are always surprises in the summer.

Even if we assume that most of these prospects won’t be ready yet, the roster will still feel noticeably fresh. Offseason moves notwithstanding, Kesler’s absence and Perry’s buyout mean that the Ducks only have four players at or above the 30-year-old threshold. A new-look offense under a new head coach provides further cause for optimism. In a more free-flowing game, Getzlaf could flirt with the point-per-game mark once more. Fowler and Lindholm, two great skaters, appear better suited for that pace than Carlyle’s slow-as-molasses tempo. Kase and Rakell will likely thrive as well.

On the flip side, there will certainly be a learning curve for everyone involved. If it takes a year to iron out the kinks, that’s OK. This is a step in the right direction. After a season to forget, the Ducks are finally shedding outdated philosophies and looking forward.